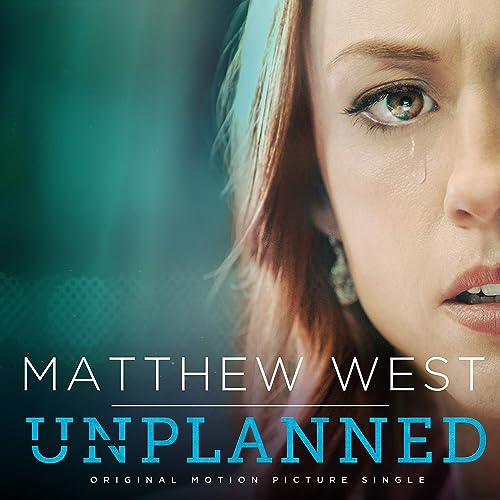 If there is one song that you should consciously and actively aim to listen to this year- I reckon it has to be “Unplanned” by Matthew West! Bold, isn’t it? What about all of the other songs releasing this year that haven’t released yet? Yep, my statement is bold, however I reckon that come December time, I’d still be saying the same thing. Matthew is probably one of the most gifted and relatable singer/songwriters of this generation- and ever since he started writing songs inspired by stories of his listeners and fans, in his cabin in the woods way back in 2009; his music has become all the more impacting and inspiring. Yet “Unplanned” is one another level, in a crazy good way. And it’s because of the controversial subject matter- as the song is inspired by the movie Unplanned, which releases to cinemas this coming Friday.

While I’m sure you all can read about the synopsis of the movie on Wikipedia, let me just give you all a quick synopsis on what Unplanned is about and why it’s controversial. See the movie is based on the memoir of Abby Johnson’s experiences at Planned Parenthood (a non-profit organisation that provides reproductive care in the U.S., inclusive of abortions), and her subsequent resignation from a senior position due to Abby having a change of heart during an ultrasound-guided abortion. Since Planned Parenthood is a very big and reputable organisation, Abby’s subsequent book Unplanned, which released in 2011, detailing her experiences garnered praise and criticism alike from those who believed in pro-life and in pro-choice. Hence the movie and now this song is always going to be a touchy subject- with some actors already accepting the notion that Hollywood may blacklist them because of their roles in this film; even the lead actress Ashley Bratcher declaring that this role is worth it despite the consequences, because of the God-inspired message.

No doubt many people will flock to see this movie- not only because they support anti-abortion, but because they’ve been invested in Abby’s journey since from the beginning; and Matthew’s latest single (which may be the end credits song of the movie, I don’t know) is also bound to stir up some healthy discussion. Musically it’s your standard Matthew West pop/adult contemporary song, with plenty of inspiring lyrics present. To be honest, if the song wasn’t based on the movie nor on Abby Johnson’s personal experiences, but rather another person’s story- not as famous as Abby; I’m not sure if this song would be the inspiring and heartfelt anthem that I reckon it is and is going to be, given the amount of attention the movie Unplanned is receiving at the moment.

But since Matthew has indeed lent his writing and singing prowess to this particular global topic and personal event; that makes this song all the more relatable to women going through the same thing- and this has proven Matthew to be THE songwriter when it comes to taking stories from fans and turning them into gold. As Matthew passionately relays to us that ‘…I don’t believe in accidents; miracles, they don’t just happen by chance. As long as my God holds the world in His hands, I know that there’s no such thing as unplanned…’, we are reminded of Psalm 139, where David imparts that God knew us before we were even born. Does that sound like unplanned to you? Nope, me neither.

Unplanned is probably going to be the most talked about movies of the year. Of course, we will give our thoughts on the film when we review the movie in the future. But for now, let me just say that Matthew West has created a gem of a song here- and hopefully more people will realise the truth via this song and the movie; that they are loved by the God of the universe, and that He doesn’t want to see any child aborted for any reason. So what are you waiting for everyone? Listen to Matthew West’s new song, but more importantly, watch Unplanned when it releases, and start the heavy but needed conversation with friends and family about the topic of abortion and when life actually begins. It’s a complicated and messy dialogue, but it needs to be addressed and talked about, don’t you reckon?