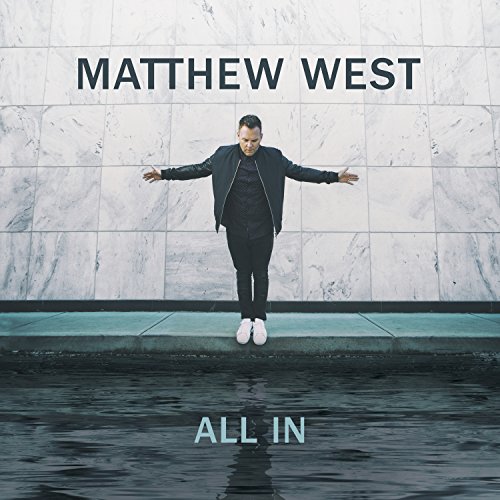 You know how it is when you hear a song and you think, ‘Gee, this theme is a direct sequel to a song that the same artist released only years ago?’ That’s what I thought when I heard ‘All In’, the latest song from singer-songwriter/acclaimed artist Matthew West, who since 2010, decided to write his songs based off of stories that he had received from fans around the world. His albums Live Forever, Into the Light and The Story of Your Life resulted from the intentional shift from writing songs about himself to writing songs about his fans. His new album All In (of which I am ‘reviewing’ the title track) drops September 2017, and once again, Matthew has been pouring over fan stories in his cabin for the better part of this year. We will be blessed with songs that have been inspired by stories, however ‘small’ or ‘insignificant’, from Matthew’s fans, and if the songs like ‘Broken Things’ and this new title track is anything of how the album will sound like, then Matthew’s upcoming album will be one of his most honest and encouraging yet. While still not as popular in the CCM industry as other powerhouse solo artists like Chris Tomlin, TobyMac, even artists like Steven Curtis Chapman, Michael W. Smith or Francesca Battistelli; Matthew has still been fervent and honest to the call to write not about himself but about others. There’s something daunting trying to put other people’s stories in song and to the paper, but with three albums under his belt doing just that, Matthew’s latest encourages us all to step from the ground of mediocrity and mundane to exciting, exhilarating and interesting, from dull and underwhelming to expecting of whatever the Lord is going to do next. ‘All In’ is a declaration of what we are going to be when we follow Christ- a participator in life and what we want to contribute to the world in which we have a sphere of influence over!

Way back in 2007, Matthew wrote this song called ‘The Motions’. In it, he speaks about how we as Christians, and as humans in general, ought not to travel through life just going through the motions, in whatever we do. If we wholeheartedly believe in something, we ought to give it our all 100%. And therein lies the point of this new song of his, ‘All In’. While ‘The Motions’ made us search inside our souls and come to terms with areas in our own lives where we have been going through the motions, whether intentionally or unintentionally, this new song from Matthew allows us to think- where to now? Are we willing to dive all in, to the grace and sufficient abundance of life that Jesus offers to us on a daily basis, or are we willing to just settle for whatever the world has to offer? Are we giving 1000% each day, or are we content to be comfortable and safe, knowing that not taking any risks and not stretching outside the familiar allows us to not grow into the people that Christ longs for us to be? That is the million $ question.

So as Matthew ponders such an issue, we are left with the hard-hitting lyrics of the first verse, and how ‘…my feet are frozen on this middle ground, the water’s warm here but the fire’s gone out, I played it safe for so long the passion left, turns out safe is just another word for regret…’ We can be so used to playing life by the same routine (and that’s not to say that routines are bad, sometimes there’s a time and place for just having a routine to survive each day!) that often, the routine allows us to fall back into the trap of going through the motions, even if we ourselves don’t want to. We can feel so stuck where we are that we may not enjoy the thing that we once had a passion for. What we once loved, whether it be a job, our hobbies, the group of friends we are around; we can start to feel like we are an outsider, that what we do, no matter how small, won’t have such an impact, because frankly, who are we, little people, to change the world? This is where Matthew’s new song hopefully encourages- that it is only God who gives us the strength to give it our all- often on a daily basis we can ask the Lord’s help in such a feat. But this is the kicker- that as long as our hearts are beating, we still have a purpose to fulfil. If we are trapped in a sense of comfortability and restlessness, let this be such a song to awaken our spirits and challenge us to move from mundane to exciting, allowing the Lord to shake up and break apart whatever it is in our lives that needs such a treatment, and thereby allowing God to give us a spirit of no fear, so that we can dive into tricky situations knowing full well that it is God who covers us even if we believe we can’t!

As Matthew’s new album releases in September 2017, we are met with the promotional single, the title track. Alongside the first radio single from the album ‘Broken Things’, this is an album that is one of my anticipated albums for the rest of the year, and if these new songs are any indication, then All In will quite possibly be one of my favourite Matthew West albums of all time, under Into The Light and Something to Say. An artist that is equally as passionate about songwriting as he is about delivering hope and encouragement, ‘All In’ is for anyone who wants a little bit of hope, and encouragement to ‘…step to the edge and I take a deep breath, I’m not turning back around ’cause there’s no turning back now…’ Well done Matthew for this engaging and inspiring track, can’t wait to when All In officially releases September 22nd 2017!