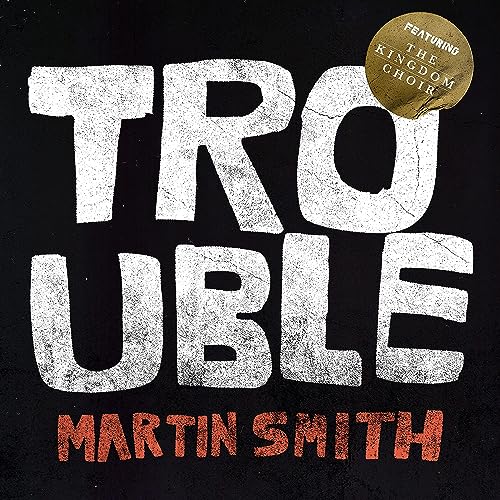 Martin Smith is by far one of my favourite frontmen to any band well, ever. After spending years being the front-man to arguably one of the most impacful and influential founding-fathers of CCM and worship, Delirious?; Martin decided to venture out on his own. Launching a solo career after the band, Martin released albums God’s Great Dance Floor Volume 1 & 2 (alongside singles from these albums in ‘God’s Great Dance Floor’, ‘Back to the Start’, ‘Grace’, ‘Fire Never Sleeps’, ‘Emmanuel’, ‘Awake My Soul’, ‘Only Got Eyes’ and ‘Great is Your Faithfulness’, to name a few) in 2013; a compilation best-of titled Back to the Start in 2014 that incorporated a lot of the songs from both volumes of God’s Great Dance Floor, alongside a live project Love Song for a City in 2018. Then we have 2019, where Martin himself decided to release his long-awaited brand-new studio album in Iron Lung, his first in 6 years (Love Song For a City was a live project). And let us not forget his side-project Army of Bones that also released their debut album in 2017, with Martin himself as the lead singer. Gee, that sounds busy. And it is. Martin’s voice, be it as part of his solo career, his band Army of Bones, or even as Delirious?, has been in our homes, hearts and on the radio from the mid-1990s onward, and thus, Martin’s presence in an industry that seems to throw people out with the drop of a hat, seems to be, and only is, remarkable and a miracle in every sense of the word. Martin’s music, both his solo alongside his Delirious? days, have been inspiring me in my own walk with Jesus over the years. Iron Lung released in 2019 (we reviewed the album here), as this Delirious?-sounding heartfelt set of 10 songs remind us all to look back on our own lives to see what good things He has done for us, so that we can be thankful for the specifics whenever we give thanks to our God for navigating us along this journey called life. Martin’s music is not going anywhere, as Iron Lung gives us comfort in knowing that ‘…this record is about joy and wonder, and the grace to keep singing through the journey of life. It’s telling the story around my first breath as a child to the last breath of someone close to me. Iron Lung is a celebration of life, love, and faith…’ Now in October 2021, and upon the heels of the controversial (to me) celebratory song ‘Dancing in the Fire’, comes another song release from Martin- ‘Trouble’.

I had my own issues with ‘Dancing in the Fire’, which you can read the reviews of it here. Nevertheless, Martin’s new song is still intriguing, to say the least. Even though I wrote one bad review of one song by Martin, doesn’t mean that I disregard everything else Martin does from now onward. Yes, ‘Dancing in the Fire’ was insensitive to say the least, and downright offensive in the worst scenario, yet, I find this new song by Martin, much, much better. The song itself features The Kingdom Choir, and has more of a ‘gospel’ feel, as Martin delivers the emotive and refreshing lyrics of how we’re going to ‘…sing our way out of trouble, we’re gonna sing till we are free, our God will find us here in the rubble, o Rock of Ages, You will save us once again…’ Yes, there’s trouble right now in the physical sense (as COVID-19 still ravages on in many countries around the world), the trouble that I believe is discussed in this track, is one of a mental kind, as more often than not, these pandemics take more of a toll on the mind, than anything else. Not to downplay the deaths of people around the world since this pandemic was called a pandemic way back in March 2020; but I often feel that when we’re fighting a battle and taking care of more of the physical aspect, the mental focus tends to slide a little. COVID-19 has taken a toll on people, not necessarily dying from COVID (though that is a major factor), but still suffering from the silent killer of mental illness, something that people can mask and hide from, because unlike physical ailments, mental ones don’t really show off for people. They’re not on display for all to see, but rather, tucked away, hidden, so no one can see.

‘Trouble’ can hopefully remind us all, that there are physical difficulties as well as mental ones associated with COVID-19, and that we need to focus on both in order for us to get back to normalcy. Singing away our troubles can seem a little trivial to some, but I myself firmly believe that once we start singing; and singing for someone else (and too someone else), our perspective changes, and the things that maybe we thought were worrisome, turns out not to be at all. Singing our way out of trouble can be hard to do and accomplish; and can be a mere impossibility for some people. And that’s ok. But the sentiment still remains- that when we sing, it’s not about us and our own predicaments anymore, but when we sing, we focus our eyes off the immediate, and focus our attention upon the song we’re singing. In Martin Smith’s case, this song ‘Trouble’ is about how the Rock of Ages saves us again and again- not about us, but about the Lord saving even the people that we deem ‘unsaveable’. ‘Trouble’ encourages us all to not necessarily focus too hard on the here and now and the immediate, but be reminded that the Lord our God fights our battles for us, and especially during this COVID-19 season of life (which is far from over), we can rest assured knowing that He sees our difficulties and longs to be close to us, especially when we believe at a certain moment that He isn’t. A song that I believe is much more appropriate and needed for such a time as this, Martin continues to remind us of the impact his former group Delirious?, and him a solo capacity, have moved the needle and challenged what we thought of worship music, all in the best ways possible. Well done Martin for this new song, can’t wait for whenever the forthcoming album releases.