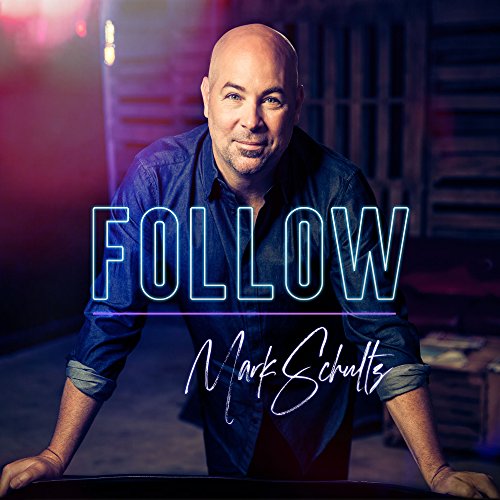 Renowned for his hit songs such as “He’s My Son”, “Walking Her Home”, “I Have Been There”, “Letters From War”, “I Am”, “Broken And Beautiful”, “Back In His Arms Again”, “Love Has Come” and “All Things Possible”, Mark Schultz, with more than a decade of recording honest and poignant stories and songs, on Word Records and Fair Trade Services; has now ventured into the independent music scene. After releasing his first hymns album in 2014 (Hymns), his first instrumental album in 2014 as well (Renaissance), and not to mention a 5 song EP in 2015 (Before You Call Me Home), and all of those three independently; Mark is back this year, and now seems to be the time- 6 years after All Things Possible– for a brand-new album. Though not a release of all original material, Follow is Mark’s first full length released independently, and is a live project full of plenty of fan favourites as well as never-before-heard new material.

Sort of like a ‘best-of’ project standing tall at 15 tracks, I’d have to say that it’s probably what none of us were expecting from Mark- after all we all want a full length all original all new studio album, right? Well let me tell you that on the surface Follow is a tad underwhelming considering how long Mark has been ‘out of the game’ in terms of CCM (Follow can be marketed as a comeback album from Mark as well!), yet multiple listens reveal just how great of a songwriter Mark is, as his smash hit melodies here don’t sound ‘old’, and somewhat feel nostalgic and sentimental as Mark pours out his heart, telling us story after story about how Jesus has transformed his heart.

No stranger to pushing musical boundaries and stepping off into something different yet completely still like his trademark and signature sound; Mark is a veteran in recording piano pop and ballads, as he has sung quite a lot of ‘story songs’ over his 18 year career. He has a knack for making the most honest, emotional and contemplative songs from the simplest of instruments or lyrics, namely his trusty piano. So, it probably wouldn’t shock you at all to hear that Follow in atmosphere sounds the same to Mark’s previous albums. Before You Call Me Home, Mark’s 2015 EP, has 3 offerings on Follow, and each are recorded with aplomb and professionalism, with the live renditions staying close to the originals. “No Place Love Won’t Go” is an upbeat 3 minute piano pop melody which has Mark emphatically reiterating that no matter where we run, there’s isn’t a place we can run or hide where Love Himself, where Jesus won’t be able to find us, that ‘…as hopeless as it seems, no, you’re not out of reach…’; while “Before You Call Me Home” brings the tempo down considerably as Mark emotionally relays to us a powerful ballad, posing the question about whether our lives are lived in accordance to what God has in store for us- will he be proud of us and say ‘well done’ even before He calls us home to His kingdom? Final representative from Before You Call Me Home is “Lift Up Your Hands (When You Can’t)” and is yet another captivating and powerful piano led ballad, this time sung from the point of a view of a strong Christian to maybe someone who is struggling in their life- as Mark give us encouragement saying that brothers and sisters can help each other and carry each other’s burdens when our friends’ aren’t able to; this melody I reckon is the true definition of active Christianity if that definition could be wrapped up and tied up in the form of a song.

The rest of the familiar songs, though not that many, are enough for us to have a brief snapshot of Mark’s illustrious and colourful career thus far. “Highlands”, from the instrumental album Renaissance, is predominately driven by the flute (in the ‘verses’) and strings, probably the violin (in the ‘chorus’), with Mark also giving us a ‘bridge’ with just soft and captivating piano. As the only instrumental offering, it is powerful and transfixing, and a great inclusion here; while Mark also delivers a live version of “I Am”, his hit song from 2006, sung from the point of view of God, as he declares ‘…I am the fount of living water, risen son of Man, the healer of the broken, and when you cry I am Your Saviour and Redeemer, who bought the sin of man, the Author and Perfector, beginning and the end…’. “God Of Glory”, one of the lesser known tracks from Come Alive is present here, and it’s great to hear the audience being thoroughly engaged in the sense that they’re being very active in singing out the words, the passion oozing out of them as they declare God to have all the glory. “Love Has Come”, “Walking Her Home” and “Everything To Me” are the remainder of the older material recorded here, and each are powerful singles- hits in their own right- and recorded to much grace and fervour that it’s hard not to be immersed in the Holy Spirit when listening to these tracks.

Out of the 15 tracks, we’ve touched upon 9- the 9 already previously recorded. Had this been a studio best of project, we probably would’ve seen tracks such as “You Are A Child Of Mine”, “I Have Been There”, “Letters From War”, “He’s My Son”, “Broken And Beautiful”, and “Back In His Arms Again”; but as it’s a live project containing some tracks we’ve never heard before, some other more well-known songs had to give way and hard decisions had to be made. Thankfully, these hard decisions pay off in the end, as Mark’s brand-new songs are thoroughly engaging, and some of the most captivating I’ve heard in 2018. “Psalm 91” is Mark’s own take on one of the lesser-known Psalms, as he turns it into a guitar led mid-tempo prayer, asking God to be with Him always, crying out that ‘…I will not fear for You are with me, faithful for all time, God, my God, You will rescue me, forever You are mine…’; while “Time Go So Fast”, thematically similar to Jason Crabb’s “Short Are The Years”, has Mark reflecting on the moments he has with his children, contemplating on the fact that no matter how much he wants time to slow down- it doesn’t, and in fact sometimes it seems as if time speeds up.

Country-inspired piano only song “Handed Down” has Mark passionately reiterating that the most important things in life aren’t money or possessions, but rather virtues, morals, character, relationships with others and just enjoying living in the moment and enjoying God’s creation- things that have been handed down to us; while “Hope Is Rising” thematically is similar to both “Beauty will Rise” (Steven Curtis Chapman) and “Tell Your Heart To Beat Again” (Danny Gokey), and is one of my personal favourites on the project, where Mark fervently cries out that your darkest days are not the end, because Jesus will help us get out of the dark and into the light, that ‘…You’re gonna fight, back to life, gonna breathe again, it’s gonna be a climb, up from the ashes and back on your feet again, that’s where you’ll find, hope is rising…’. “What Love Looks Like” is probably the most confronting melody on the entire album, and maybe the most personal, as Mark skilfully delves into the concept of living an active life for Christ, and what it means to show God’s love to the world, especially non-believers, culminating in the fact that this song was based on the fact that because Mark’s parents adopted him when he was younger, showing the love of Jesus to him, Mark has since done the same and adopted a child of his own this year with his wife. The album ends with the studio version of “Follow”, and as an album ender, is as pop as pop can be. Guaranteed to be on radio, it’s probably the least innovative of the bunch, but because Mark’s passion and enthusiasm still permeates throughout, it’s hard to be downright negative or harsh over even this song- as Mark sings out ‘…I’m gonna call on His name, for He is mighty to save, my strength, my hope, it’s You I’m gonna follow…’, there’s just something about it that makes me sing along with Mark, and with great intensity too!

Standing at 15 tracks and a touch over an hour, Follow is as musically diverse as ever, and something Mark Schultz should be proud of, given that he’s been partially absent from the music industry for a while now.  While Mark may not necessarily be the most popular artist within the CCM industry currently, we are nevertheless shown an array of melodies delivered with a piano and guitar focus, as lovers of Mark’s previous material will enjoy his new release. While not necessarily the most groundbreaking artist musically (call him the Casting Crowns of Christian male solo singers, if you will), Mark’s heart still is worn and shown in these old and new songs, with each of them telling a story and painting a picture of the Christian walk. While we all may want Mark to record another album of all new material, Follow is a worthy release, as it shows us that Mark has so much more to give. Judging by these new songs though, I reckon the best is yet to come. So sit back guys, Mark is back doing what he does best- so let’s revisit the past and look forward to the future, remembering that it’s Jesus whom we are going to follow!

3 songs to listen to: Hope Is Rising, Lift Up your Hands, I Am