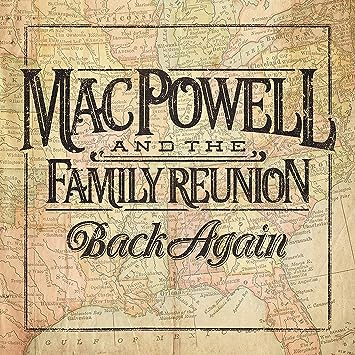 Mac Powell And The Family Reunion– Back Again (Amazon mp3/iTunes)

Everyone who knows Christian music inside out knows about Mac Powell and his rock/southern gospel band Third Day, formed in 1996. Even if you haven’t heard of the band before (and I find it highly unlikely); there’s no denying that some songs from their discography may have found its way to radio or into the Sunday morning worship service setlist. Songs like “King Of Glory”, “My Hope Is You”, “I Believe”, “Mountain Of God”, “Cry Out To Jesus”, “Sing A Song”, “Nothing Compares”, “Come Together”, Consuming Fire”, “Children Of God”, “Revelation”, “Call My Name”, “Soul On Fire” and “I Need A Miracle” have all touched out lives at one point or another; while the group’s latest album Revival in 2017, was one of the best that they’ve ever recorded. The split between lead singer Mac, guitarist Mark Lee and drummer David Carr was completely unexpected- and left me wondering why. And while I tried to make sense of the news in a Flashback Friday’s post I wrote a couple of years ago; it’s now time to see what is happening in one of the band members’ next step. For lead singer Mac has started up his own group- Mac Powell & The Family Reunion.

“…people were asking, ‘What do you do? What does the Family Reunion sound like?’ and it’s a little bit of everything. It’s a little bit of rock, a little bit of country, a little bit of gospel, and a whole lot of love. It’s interesting to see all the old Third Day fans come to the show and see their responses. There are so many people who come not knowing what to expect and they end up loving it. There have been a couple fans who come and say, ‘Well I didn’t really want to enjoy this. I came here with a friend. I didn’t even want to come, but now that I hear and see what you’re doing, I’m behind you a thousand percent.’ So those are fun conversations to have…” While on the surface we can see Mac Powell, former frontman of the band, dipping his toe back into music, and providing us with something new; a look deeper reveals the sound of Third Day (like he never left) meshed together with a bit of country and a bit of southern gospel- something musically very Third Day-ish but with other music influences thrown in as well to keep us interested. Third Day may be gone for the time being (never say never to a reunion, because…well if dc Talk can sing at concerts and still sound good while technically still being on a ‘hiatus’, well, anything is possible!), but now we are blessed to hear Mac’s new venture, for however long God wants him.

A fair while ago, Mac released a couple of solo albums under his own name- Mac Powell in 2012 and Southpaw in 2014. I never really got around to listening to them- to me it felt that if I did, I’d be preferring Mac’s solo material to Third Day’s, as I would be wishing that Third Day would quit and split up. Which is…illogical and nonsense, but hey, those were my thoughts at the time. Now, as I am wiser and older, I have come to realise that band material and solo projects can coexist together, with one’s success not harming and hindering the success of the other. In fact these two can in fact enhance the quality of each other, and knowing that information was kind of like a revelation as I was listening to Mac’s debut studio project with the Family Reunion- Back Again! Though isn’t really known who the members of The Family Reunion are, aside from Mac and Jason Hoard, I reckon it hardly matters. Mac is having fun here, and as he eloquently sings about being back in front of the stage and about the ups and downs of life. Though not classified as a ‘Christian’ album, Mac is still bringing Jesus into the marketplace here; so let us sit back, ponder and dwell upon one of the most musically unique albums of the year.

“Back Again” opens up proceedings, as the first single packs a big punch and delivers to us a southern gospel anthem that is musically incredibly catchy and hopeful as well. With Mac earnestly conveying to us the pressures of travelling on the road for live shows, he also gives us hope and reassurance, as he sings to his loved ones about coming back to them no matter where he is- especially for the special occasions! Musically contagious in that this song is extremely danceable, Mac has unveiled a winner here, especially as the first song of a new project. While the next track and the hand clap and acoustic guitar led quick-tempo 3 minute tune “Flood Waters” vividly describes how Mac is going to find his loved ones during a natural disaster (or metaphorically how he’s going to lean on his family during the hard times, or even lean on God!); the laid back and fun “Whoo!” is as frivolous and silly as they come, with Mac and guest vocal Craig Morgan outlining what is great about cutting loose and just relaxing after the working week is over. And just from these three openers, you can tell that Mac is having a lot of fun!

The rest of the album follows in the footsteps of these three instant fan favourites and album highlights, as Mac and co. relay to us relevant topics that we all need to dive deep into. “Watermelon Rind” explores Mac’s favourite fruit, but essentially also recaptures his childhood innocence and speaks about his strong relationship with his mother, who introduced him to watermelons; while the heartfelt and emotional “Red On A Rose” is a slow tempo acoustic guitar led ballad that basically relays to us that Mac will always be there for those around him whenever they need Him (or the song could also be sung from the point of view of God to each one of us)! Unfortunately “I’m Beginning to Wonder”- another mid tempo southern gospel ballad- is a low point on the album as Mac asks his spouse if she ever loved him at all (a really direct and confronting question!), yet the seemingly sobering and sombre reflective piece “Going To California” brings up my interest to listen, as Mac reminds us all of the perils and hardships of touring in a band, but also promises his family that he’ll be back to see them soon!

A love song at heart, “I Could Get Used To This” is an album highlight, as Mac asserts that when he saw his wife, he made the conscious decision to place her first in his life before any show and any career opportunity, which is rather admirable and commendable; while the penultimate standard edition track is “Tiptoein’”, where Mac delves into a time in his life where he was very rebellious, sneaking around and defying his parents just because he could. Life as a teenager can be a bit confusing and rough, and “Tiptoein’” pays tribute to the crazy times in Mac’s life that he wouldn’t trade, because it made him who he is right now. However my absolute favourite track on the album is “Heaven”, co-written with Josh Wilson. The longest song on the album at nearly 6 minutes, Mac delivers a Third Day-esque rock ballad that is essentially a worship song, where the persona longs for heaven and a respite from the hardships and the trials of life; complete with a stirring electric guitar solo for almost 2 minutes at the end of the track.

Back Again could have ended there and the album would’ve been pretty good. The exclusive 2018 album that was released at live shows had “Heaven” as track 10 and the album closer. But with the album releasing everywhere a year later, 5 more songs are added, which further cements my love for all things Mac Powell, and my sadness that Third Day is no more. “What I Came Here For” is a reflective, introspective and thoughtful acoustic guitar led mid tempo melody that basically asks the question of the meaning and purpose of life (similar in theme to “Heaven”!), as Mac eloquently cries out ‘…I don’t know what I’m chasing, but I know there’s something more, and Lord, I pray that one of these days I’m gonna open up the door and find what I came here for…’, while songs like “Mess Of Me” and “Settling Down” have Mac ardently expressing his love to his wife, singing about settling down with her for good, and asking the question why her presence has made him a lovesick fool for her. “Sitting Here With You” is a mellow, reserved tune that speaks about how sitting with his significant other is the best thing Mac Powell could do; and the bloated 15 track album ends with the vengeful, hateful and intense “Mississippi”, where Mac tells an ex-lover that he’s going to leave her life when she’s finished counting to ten.

Aside from the underwhelming “I’m Beginning To Wonder” and the weirdly placed “Mississippi” (it should’ve been “Heaven” as track #15), Mac Powell and the Family Reunion have recorded a fine debut album. While I will always miss Third Day and will continue to revisit their songs time and time again, Back Again is an overall musical masterpiece, as Mac successfully makes the transition from CCM to country. While it isn’t known what is next for these guys, one thing is for certain. That I will be supporting them every step of the way. Now what are you all waiting for? Check out this unique release pronto! You won’t regret it, I guarantee you!

3 songs to listen to: Back Again, I’m Beginning To Wonder, Heaven