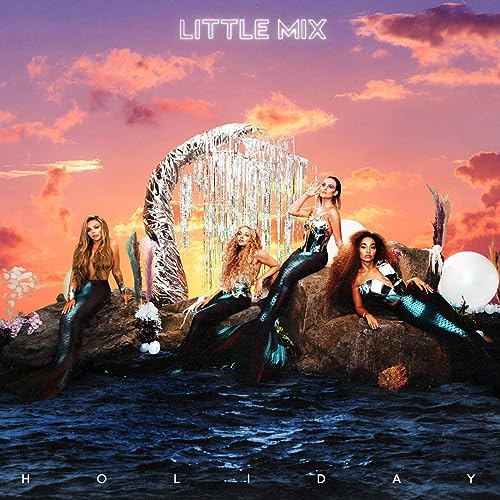 If you were to ask me who the most prolific, inspiring, engaging, honest, vulnerable, encouraging and hopeful girl group of the modern era is … then I’d definitely have to say without a doubt British quartet Little Mix. Comprising of Perrie Edwards, Leigh-Anne Pinnock, Jesy Nelson and Jade Thirlwall; I have only started to seriously listen to the group and their discography (5 studio albums and counting) this year- all due to my rising interest being piqued because of a few of their songs being constantly played on the radio (namely “Change Your Life”, “Black Magic” and “Little Me”). So when the group’s latest single “Break Up Song” was unveiled- with quite heavy promotion in the lead up to the track being released- I thought I better take a listen and see what the big fuss is about. I mean, Christian singer/songwriter Philippa Hanna endorses them, and toured with the group, so Little Mix have gotta be great, right?

Well let me tell you that “Break Up Song” is honest, emotional, vulnerable and inspiring, while still being fun to listen to, as well as having a positive message- and you can read my ‘review’ of the single here. Even before listening to “Break Up Song”, the odd few songs I had heard on the radio convinced me to write about these girls in my Momentous Mondays blog post– so in that sense Little Mix has to be doing something right for me to deem them a future influencer in music. If you haven’t heard of Little Mix before, “Break Up Song” is indeed a great place to start- despite the group’s extensive discography. But if you guys have come to read more about the history of Little Mix, then here you would be disappointed. Because if you want to read about how the group came to be…then you can read about that and more about the group’s songs on my Momentous Mondays blog post. And while there, you all can listen to the group’s hit songs. Finished yet? Good, because “Break Up Song” isn’t the band’s only new track of the year! A few weeks ago, Little Mix dropped “Holiday”, so let’s dive deep into this latest single, shall we?

On the surface, this happy-go-lucky danceable 3 minute pop track speaks about the explicit physical nature of a relationship, and that during quarantine and lockdown (which was when this song was written and recorded), seeing that going on a holiday overseas or interstate isn’t possible at the moment, the band members declare that going on a ‘holiday’ with their partners is good enough- does this imply taking drugs and going on a ‘trip’ during physical intimacy? On the surface, despite the catchiness of the track, it may feel like this song was lyrically basic and unnecessary. Yet, because it was Little Mix, I forged on and tried to find the hidden meaning. And lo and behold- I found a diamond in the rough. A second, third, fourth, even fifth listen to “Holiday” reveals that in my opinion, the underlying message highlighted is the longing to be in a close relationship with your significant other- this pop track is a love song essentially reminding the significant other that they’re the most special part of your life- that nothing else compares to them, that they’re unique and special and one of a kind. Some would say that I’m reading too much into the song, and that it’s as shallow as it sounds. But for a band that has had smash hit songs with many tracks having double/triple meanings; I reckon Little Mix might’ve had another hidden meaning in mind for this song. In any case though, the track is nevertheless fun to listen to, and is a great reminder to place our loved ones as important and worthy even while we may be apart from them due to quarantine. And if we remember this, then maybe, just maybe, Little Mix have done their job here. Perhaps God is also speaking through this song and through Little Mix’s discography as well. I mean it’s very possible!

With COVID-19 increasing confusion and uncertainty around the release date of albums and TV shows and movies, inclusive of Little Mix’s upcoming 6th album (supposed to release this summer in the UK… which could still happen within the next 3 weeks or so!), there’s no guarantee when there would be new music released from any artist. This makes any new single extremely special, and that is the case of “Break Up Song” as well as “Holiday”. Sure, “Holiday” is a tad superficial lyrically, but I reckon if we move past that and still allow God to move; then we can hear one of this year’s most underrated songs thus far. While I myself need to re-listen more to Little Mix’s discography because they are that good (and writing this blog post a few months ago only cements the notion that these girls are going to be here to stay, and will blow up the world someday- yep even America!); I believe that this band is one band that you all should take notice of, and check out if you haven’t already. So what are you waiting for? God is certainly moving through Little Mix, so dive in and hear what they have to say through “Break Up Song”, “Holiday” and other tracks!