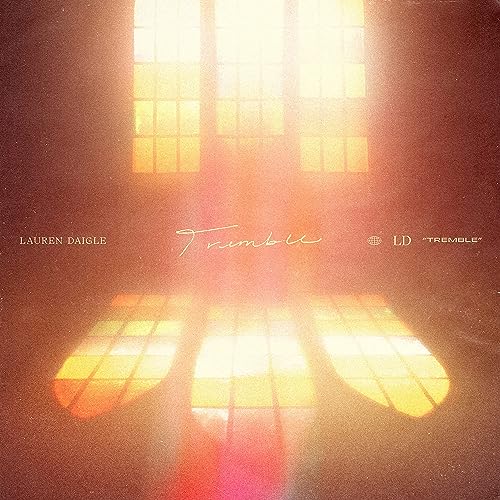 Lauren Daigle is one of the most influential, inspiring and thought-provoking artists currently. That’s a fact. She may not have been well-known or even respected though, even 3 years ago; but all of that changed when “You Say” blew up everywhere (and I literally mean everywhere!). “You Say” charted extremely high on mainstream charts in 2018- and it obviously helped that the wider public caught onto the fact that Lauren eerily sounded vocally like Adele. And since Lauren has made the seamless transition to mainstream music, and ever since her album Look Up Child has been sold in the general physical music stores (not just exclusive to Koorong, but in JB Hi-Fi too!); she’s been on the meteoric rise upwards and onwards. We reviewed Lauren’s album here, and we blogged about her too– and in a nutshell, we are all in awe of how the message of Jesus is being spread amongst the marketplace. And so… while nothing can ever top “You Say” in terms of impact, effectiveness, and poignancy; it’s time to be immersed in Lauren Daigle’s latest. Her new live single “Tremble” recently released to all digital retailers… and let me tell you- it’s a moving, inspiring, and worshipful ballad, although it doesn’t hit the stratospheric heights of “You Say”, and mainstream media markets possibly might not latch onto this overtly worshipful single.

“Tremble”- a song that Lauren started singing when she was on her 2019 World Tour; has finally made it to our ears 2 years later… although it might have been earlier had it not been for the pandemic. Nonetheless, this passionate, earnest and prayerful melody is a return to form by Lauren. Despite Look Up Child reaching dizzying and meteoric heights in the mainstream, that album was more covert in ‘religious’ themes rather than How Can It Be. Thankfully, Lauren leaves no stone unturned and leaves nothing ambiguous here in this powerful, eclectic and vibrant worship anthem. As she emphatically sings to Jesus that ‘…You are taller than the highest of the hills, and stronger than the walls we try to build, You blind me with the beauty of Your face, and draw me close with Your divine embrace, speak to me with healing in Your words, and fix the things I didn’t know were hurt…’, we are presented with an unbridled and unashamed worship anthem that deserves to be sung in churches on Sunday mornings everywhere in the near future.

Some of us may have been concerned and discouraged when Lauren of late never mentioned God or Jesus in subsequent mainstream interviews (even when talking about the song “Rescue”, which is partially sung from God’s perspective!). or when Lauren performed on Ellen, or when she dodged the question in the media of whether homosexuality is a sin or not. Even “Hold On To Me” seemed to be ‘less Christian’. And so we all might have been concerned about whether she is deconstructing or whether she is firm in the faith but wants to hang onto mainstream fame as well, and so is compromising. However, “Tremble” is not Lauren Daigle compromising. It’s her making a statement that she’s a Christian and she wants to praise Jesus. Sure, she may still have one foot in the CCM camp and another in the mainstream music camp. However God is still using her to bring people into His kingdom… and regardless of how that looks like, I reckon that’s always a good thing. And so, as we patiently (or anxiously!) wait for Lauren’s new album (whenever that might be!), let’s hold onto this worship anthem and praise God wherever we are! Well done Lauren, I can’t wait to hear what God has in store for you next!