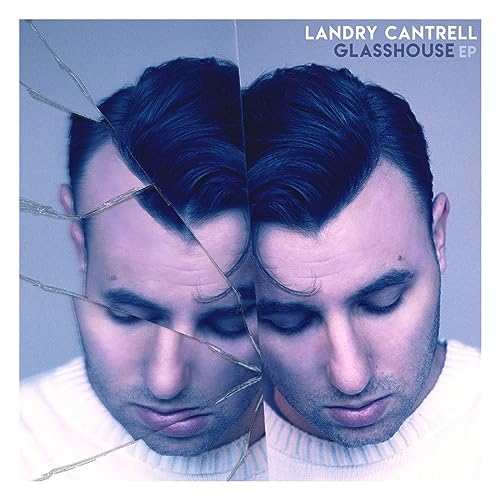 Signed to Dream Label Group in 2017, CCM/pop artist Landry Cantrell unveiled his debut album Projections to stores in June of that same year. With a musical and vocal sound similar to Colton Dixon, FFH, Anthem Lights, Mark Schultz and Sanctus Real, the 12 track inspirational, personal and honest batch of songs was one of the highlights in June, and also in 2017- in our opinion. Amidst a sea of hundreds of albums that release every year, and plenty of new artists releasing albums in any given year as well, Landry stood out in 2017 greatly- not since Zach Williams and Grayson Reed in January 2017 had I been excited about a new artist releasing a debut project. Now fast forward 3 years later- and here we have Landry with his sophomore effort- an EP titled Glasshouse. And as the first album was so resonating and so powerful- so too has my expectations for this album. So, what is the result of my anticipation? Well let me say that this EP from Landry is one of my favourites of 2020- and let’s dive in and see why.

Opening the track list is the laid-back acoustic driven and keys prominent “All The Matters”- similar in theme to Colton Dixon’s song of the same name, while nonetheless sung in a more ‘mainstream’ type of way. As Landry emphatically relays to us that the only thing on earth that matters is love, we are reminded that it is God’s love that is really the key for us to survive and thrive on this earth- it’s subtly and covertly mentioned here, which I reckon is a good thing that Landry can capture listeners from all walks of life through this song alone. Next offering “Weightless” is pure pop at its catchiest, as Landry emphatically declares that it is Jesus Christ who keeps him ‘weightless’, keeps him grounded as well as safe and secure; while the reflective and introspective “Waiting On You” dives deep into the theme of patience and the ability of each of us to wait for whatever God has planned for us within each season of our lives.

“Beyond”, the EP’s first single, is one of the highlights on this project, as Landry passionately and emphatically relays to us that he longs to live a life that’s beyond the natural and instead leans on God to allow him to live a life beyond anything he’s ever imagined, hoped or dreamed; while “REM” is a romantic reflective track directed to his wife, as Landry relays that he wants to REM (remember every moment) with his wife- the song was released on Valentine’s Day this year. The EP then ends as quickly as it began with the musically and lyrically impressive “Temporary”, with Kristen Hicks (Landry’s sister in law) on guest vocals. Lyrically the track is as earnest as it is honest, as Landry and Kristen sing about a broken relationship, whereby the man and the woman are both choosing to stay in the relationship because of God in them, and the fact that He isn’t temporary and that He has made them new. A track that gives us hope for all of the ‘shaky’ relationships out there- Landry has reminded us that God has the power to turn even the most dire of situations around, for His glory and our good.

Landry Cantrell’s sophomore label project is one that is sure to garner popularity and buzz in the coming months- well done to Dream Label Group for signing this young up and coming artist. A release that you definitely do not want to miss out on, let me just say that there is no reason not to listen to Glasshouse EP if you’re a fan of CCM and pop. So, what are you waiting for? Landry may not be a household name now, but I can guarantee you- he will be. So dive in deep and start with the first track “All That Matters” straight right through until the end of “Temporary”.

3 songs to listen to: Waiting On You, Beyond, Temporary