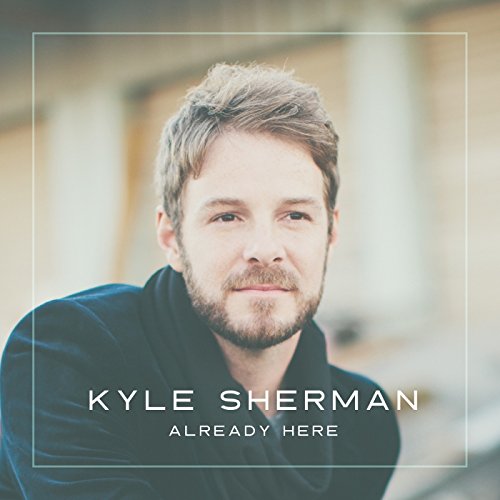 Not necessarily a household name, singer/songwriter and worship leader Kyle Sherman may not be as popular as other artists right now such as Chris Tomlin, Matthew West, MercyMe, Casting Crowns, Newsboys and Tenth Avenue North to name a few; the debut project Already Here which dropped a couple of weeks ago proves that an indie artist can make a difference in the lives of people, and God can use anyone to further His kingdom. Yes, anyone. While the topic of who God uses and who He doesn’t use to draw people closer to Himself is for another post entirely in the future; let’s focus on Kyle a bit. I know absolutely nothing of his background or music style, apart from listening to these 9 tracks. There’s no bio on the internet, and the only reason why I gave this album a spin was because I heard “You Said My Name” a couple of years ago when it officially debuted as a single, and the other day “Give Me Faith” (the cover from Elevation Worship), when it was suggested by YouTube as a ‘recommended video’. I’m so glad I did listen to Kyle’s songs though. Vocally similar to Josh Wilson, JJ Weeks Band and Jonny Diaz, Kyle Sherman is one of today’s rising CCM vocalists- mark my words, he will be very popular in the near future, maybe signed to a label, even!- and Already Here is a reminder that Jesus is always with us in every moment, and a testament to the fact that He is faithful and keeps His promises.

Opening the album with the resounding guitar led rock anthem “Never Let Me Go”, we are immediately introduced to Kyle’s powerful and engaging vocals, as he eloquently reiterates across vibrant guitars that Jesus always holds onto us and ‘…I know You’re gonna hold me, I know You’re gonna show me, everything I need to know because You told me, You’re gonna keep me close, never gonna let me go…’. An intense dance/head banging melody with depth and strong lyrics, as Kyle reminds us that we can live freely knowing that Jesus is by our side forevermore; the album opener is one of the best since Hollyn’s “Can’t Live Without” a few months ago. “You Said My Name” is next and though as CCM as songs sometimes are, Kyle’s passion and zeal for Jesus makes the song enjoyable, as he ardently recounts the notion that ‘…everything changed when You said my name, I went from lost to found, into the darkness came Your light, I see so clearly now, with a word my walls crashed – it happened so fast, in a moment my everything changed, when God, You said my name…’. Brilliantly led by stirring guitars and a pop atmosphere where I can just keep on dancing, Kyle’s first single is definitely a standout here, as is “Give Me Faith” from Elevation Worship.

Probably the most famous track from Elevation Worship, “Give Me Faith” has been covered by a handful of artists (not that many!) such as Newsong and The Museum. Kyle’s version though, ups the tempo a bit, and delivers a rousing rock/worship anthem driven by guitars rather than synth and keys in previous cover versions. The result is a winner here, as Kyle packs a punch, and delivers with gusto the sentiment that ‘…I may be weak, Your Spirit’s strong in me, my flesh may fail, my God You never will…’– it’s such a strong version, so much so that if you didn’t know that Elevation Worship wrote the song, you’d think it was a Kyle Sherman original! The acoustic guitar driven mid-tempo ballad “Already Here” and the inspirational CCM-esque pop melody “Used To Be” are next, and both further cement my assertion that Kyle Sherman is one of today’s rising music superstars in the making- with the former track being an earnest prayer, asking God to be here with us, while later on realising that He is already here with us and working everything for our good; and the latter track being a catchy radio friendly guitar led melody highlighting the notion that Jesus has wiped away everything we used to be, and we can start again, and be brand new people because of what Jesus did on the cross and at the grave.

“Holy” is such as generic song title, but Kyle’s fervent and enthusiastic guitar led worship anthem is anything but. Though this song may not be for everyone (it is rather repetitive and the most CCM song on the entire album), I still find myself tapping my toes and singing along, even though I do agree that it’s not that inventive. But then again a simple song works because of the repetitiveness, and Kyle eloquently praises God with simple phrases, and it is this simplicity that works, as we remember that Christianity when it all boils down to it is worshipping Jesus and making His name more famous, though drawing people to His presence.

Kyle lyrically goes deeper (although you probably cannot go deeper that singing ‘holy’ to Jesus!) in “The Way You Love Me”, gratefully conveying raw emotion and thankfulness, reiterating that ‘…I just wanna say thank You for the way You love me, You love me, mountain high or valley low, You’re with me everywhere I go…’, reminding me of Psalm 139, in that Jesus knows every inch of us, and loves us all the same, despite our flaws and our mistakes; while the album’s penultimate track “This Love” has Kyle sounding eerily like Josh Wilson vocally (is Josh singing as an uncredited cameo?) and is a soft, reflective, and contemplative acoustic guitar ballad, where Kyle sings to his son in the same way that Steven Curtis Chapman sings to his daughters in “Cinderella”. Lyrically and thematically in the same vein, Kyle reiterates that his love for his son is as immense and as big as anything his son could ever comprehend- and that is yet only a fraction of the way God loves each one of us; what an eternal truth to wrap our minds around! The album ender on Already Here is the slower paced emotional and honest ballad “Finding You”, where Kyle eloquently imparts to us that he finds Jesus in everything he sees. Probably the most impacting song on the album, “Finding You” ends Already Here with a bang, as we are presented with the truth that Jesus in in everything we say and do, and that we just need to know where to look if we cannot seem to find him.

What can I say about Kyle Sherman’s debut album that I haven’t mentioned already? I love each of these melodies, and as far as debut’s go, this is my favourite album since Hollyn’s One Way Conversations. There’s nothing much more needed to say here. If you’re a fan of Josh Wilson, Jonny Diaz and JJ Weeks Band, you’ll love Kyle and his personal and inspirational melodies. So check it out! Enjoy and let me know if you reckon Kyle will be signed in the near future!

3 songs to listen to: You Said My Name, Already Here, The Way You Love Me