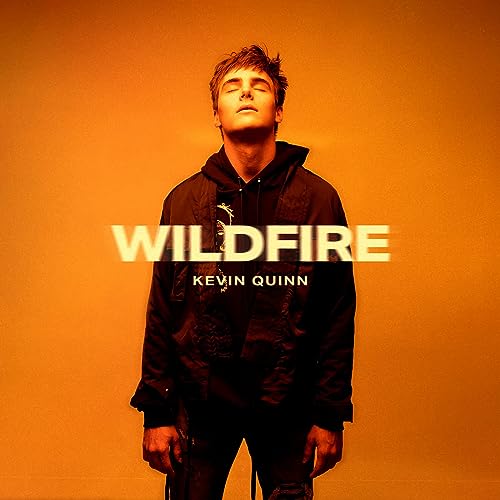 One of the recent signings to Capitol CMG, actor/Disney Channel star/singer-songwriter Kevin Quinn just released his debut CCM radio single ‘Wildfire’. To be honest, I don’t really know much about him. Aside from the fact that he’s an actor who starred in the Disney Channel TV series Bunk’d, had a supporting role in the 2016 remake of Adventures In Babysitting, as well as co-starring opposite Bailee Madison in the Netflix Christian drama movie A Week Away, Kevin’s basically been under the radar over the last few years. Maybe, the release of ‘Wildfire’, is here to change all of that.

There’s nothing much to say about this song aside from the fact, that anyone who loves pop music with an inspirational edge, will enjoy this track. The song itself has a sense of a universal pop-flair to it- it can be enjoyed by almost anyone: people of faith, or even people of no faith. To be brutally honest, this song doesn’t really excite me that much when it comes to the future of CCM-pop, because anyone who wants to create inspirational-pop can. To be very blunt, it’s very hard to distinguish CCM (at least the CCM played on K-Love that is not worship music) compared to the ‘inspirational’ pop in the mainstream, and that assessment doesn’t spell much hope for CCM in general. Now I love CCM- if you’ve been around the website long enough over the last 5, 6, 7 years, then you’d know. But there’s an unfortunate statement that I recently heard about CCM in general, that Jeremy Camp mentioned around a month ago, during his discussion with Skillet frontman John Cooper and ZoeGirl vocalist-turned-apologist Alisa Childers. And this statement made me very sad- ‘…there isn’t [any accountability or spiritual requirement for someone to get signed into CCM]. And I think that’s one of the problems, is that there’s an assumption because you sing a song about Jesus, that your heart is there. And of course, let me just say this. We all know Isaiah 29, and then Jesus actually repeats it in Matthew 15, when He says, ‘the people, they praise me with their lips, but their hearts are far from me’. So, there can be an appearance of ‘yeah, they must know the Lord, they must be fine’, but their hearts are far from Him. Or you don’t know actually what they believe, and so I think that…I don’t know how to remedy that. I could tell you some thoughts, but that’s not really the question. No, there’s not a spiritual requirement, and so what happens is you put people on a platform once again, that are put into position where they have an authority, almost on who Jesus is, or how to walk a Christian life, that may not even have a clue what they really believe, and so that actually starts coming out later…’

It is in this quote that I realise that I don’t really know what Kevin Quinn actually believes. Or if he’s actually professed publically that he’s a Christian, following Christ, and wants to live his life for Christ. I mean, he may well be a Christian, but if listeners don’t really know and can’t really tell, then…well, what’s the point? Yes, ‘Wildfire’ is a cool song, with a cool beat, and a song that you can dance to. But compared to a song in CCM by an artist like MercyMe, Jeremy Camp, Third Day, Casting Crowns, even Newsboys…well, let’s just say that the artists coming up into the CCM industry right now, aren’t doing enough to be different from their mainstream counterparts. There, I said it. Maybe it’s because I assumed that everyone who was in CCM was a Christian, and now since there’s a lot of people recently deconstructing their faith (I don’t have to list people who have been deconstructing recently, you all can go to your friend google for that!), I dunno. I’d love to think that Kevin is a Christian, but listening to ‘Wildfire’ and nothing else, it’s hard to even say that ‘Wildfire’ itself is a Christian song. Because it isn’t. It’s a mainstream song. I guess, I expect people who sign to a Christian label to create something that is different from the typical feel-good pop/inspirational stuff I already hear on the radio. Am I asking too much though? Can someone who’s not a Christian fit right into the CCM industry, and still create music that is vaguely Christian, and we as listeners wouldn’t even know? Whatever the case on Kevin’s the faith, the song itself is ok, but not if you expect this song to be some kind of theological help. No, ‘Wildfire’ is nothing like a ‘Praise You In This Storm’ (Casting Crowns), a ‘Is He Worthy’ (Andrew Peterson), or even a song like ‘In The Hands of God’ (Newsboys), ‘Shoulders’ (for KING & COUNTRY), or ‘Til The Day I Die’ (TobyMac). Maybe it doesn’t have to be, but it should’ve been something more than what was released though. ‘Wildfire’ as it stands, shouldn’t even have been made, under the old assumption, that songs and material released under Christian Radio Labels ought to have some kind of Christian undertone (because news flash, ‘Wildfire’ doesn’t really…at all!).

But knowing what I do know now, and how the accountability, just like any music industry sector, goes out the door…well, I just mourn for CCM at the moment. Yes, I’ll have my favourite artists going forward, but I guess I’ll have to be more cautious as the months roll by. I hope and pray that everyone who has been signed to CCM labels, are Christians, but at the end of the day, I’m not one to assume anymore. As for the state of ‘Wildfire’…yeah, not really listening to that song again, any time soon. I guess, give me some old-school Newsboys any day, I reckon. But who am I to judge, right? I’m just a humble music reviewer. If someone gets connected with ‘Wildfire’, and God uses that, then great. God can use Christians and non-Christians alike. Here’s hoping (and praying) that other older godly people are around Kevin, so that his own personal faith journey can flourish, and he can receive input from people who have been walking with the Lord longer. Kudos to Kevin for creating something that has a pop-inspirational edge, hoping and praying that the songs that come forth are more faith-orientated than ‘Wildfire’ really is.

‘…I had quite an interesting faith journey. I grew up in Church and I grew up praying. Even from a young age, I remember praying every night when I didn’t even really know what I was doing. Maybe that was God wanting me to speak to Him when I didn’t even realize I was speaking to Him. But then some stuff happened as I got older, stuff that any average adult deals with eventually, whether it’s death or grief, hardship, health issues. At a certain point, in my late teens, early 20s, it got so bad for me that I kind of just shunned the idea of God altogether. Because I was like, if God does exist, and God loves me, then why is He making my world a living Hell? It felt that way and I’m sorry if that’s like a graphic depiction of what I was going through, but it really felt that way. I was so lost in every sense of the word. Then there were a few events that happened, I guess you could say, according to God’s plan that lifted me out of that darkness. I started to see the light again and find enjoyment and just peace in my life and resolution with some of the things that I was dealing with. The more I settled into that, the more I got to know God, and the more I realized He was always trying to help me. It’s just some things have to happen for a reason. Now in retrospect, at 24 years old, I can look back at those years and say, “Wow, okay, it really did have to happen for that reason.” Now my relationship with God is stronger than ever. I talk to Him every day. I’m constantly praying and it’s just interesting seeing the juxtaposition of that in my life, from not even four years ago when I didn’t even care to talk to God. Now four years [later] it’s like, He’s one of my strongest relationships…’