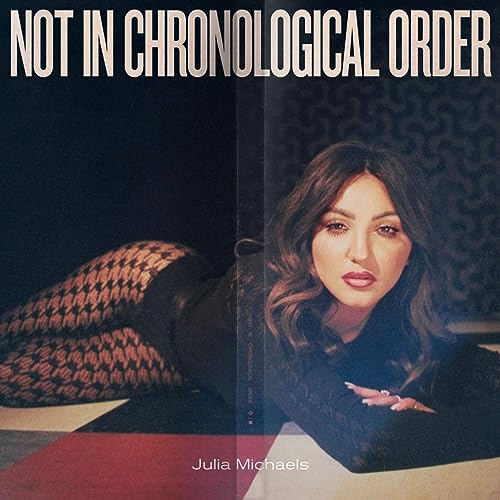 With the start of a new year in January, we all thought that COVID-19 would be left in the dust. Oh, how wrong we were! There’s still cases, there’s still restrictions, and there’s still reason for us to be cautious and apprehensive about the future. There’s a vaccination but we wonder if it is effective. And thus, we need assurances, and inspiration and hope that we’ll be alright in the end. There is no end in sight for this harrowing virus… but we can listen to music to escape our troubles for a bit. And this is where Julia Michaels’ debut full length album Not In Chronological Order comes in. With Julia perfecting the blend and mix between hard hitting and thought provoking anthem and nonsensical and whimsical pop ditty; the result is an album full of fun, full of comfort, and full of hope and inspiration. If COVID-19 has got us down, then Julia has the remedy for us to be back on our feet again, as we become eager to restart life with a bang and a sense of a greater purpose.

I think isolation and self-reflection are two things that plagued a lot of my quarantine time. It also was kind of bizarre because we had to socially distance for our sessions and I’ve never really done anything like that, but I was like I’m not making an album on Zoom. I refuse. I don’t want to do that. That was probably one of the biggest things, the social distance stuff.

Not In Chronological Order, literally just means not in chronological order. None of the songs are in order of the way they happened in my life. And timing—yeah, it took me a long time to do this album mostly just because I don’t know if I was really ready to do an album and I think one day it just hit me. I was doing “Lie Like This” and then I was writing “Pessimist” and I was writing all these songs. Then I realized I had enough songs to be close to an album and I was just like, “I don’t want to stop. I want to make this. I want to put it out.”

I’ve blogged about Julia and her burgeoning influence a while ago… so you all can read that if you want about how Julia became a musician and a singer/songwriter. But let me just reiterate that this release, though only under 30 minutes in duration, showcases Julia at her most vulnerable, honest and emotional. This album is a lot of fun, but it does make us think- and for a debut album I’d say it’s pretty strong. Promotional single and album opener “All Your Exes” speaks about the concept of jealousy, and fervently relays the point that wanting to be the only significant other for someone and being jealous of their exes… is pretty petty and irrational. Yet Julia creates a thought-provoking and hard-hitting anthem here and makes us think about our own prejudices and biases; and encourages us subtly to let go of the past and bask in the present. Because when we hold onto grudges, can we ever truly live and live freely? “Love Is Weird” is next, and is as deep a song as you can get, with Julia diving deep against the backdrop of slow acoustic guitar, into the concept of love. As we are met with the realisation that love works differently for each one of us, and shows up when you least expect it, we are also encouraged to live life as it comes and not be bound to our own preconceived ideas of when love is supposed to show up. This song reminds us of the transience and the unpredictability of life… and shouldn’t life be lived with no knowledge of what the future may bring. In some ways, this song shows me that I need to rely on God more and give Him more of my life daily… and so can I just say thank you to Julia for somewhat bringing the focus back to God? Or an I over spiritualising this song, when there doesn’t need to be a need for it?

“Pessimist”, unlike the title, is actually a happy-go-lucky song, as Julia champions her boyfriend, and lets us know that ‘…you’ve changed the way I felt, with your touch, with your help, you took a pessimist and turned me into something else…’; while the keyboard-led angelic and anthemic “Little Did I Know” is an ode to her boyfriend, with Julia reflecting and reminiscing about her life prior to meeting her boyfriend, and juxtaposing it with how she’s feeling now and how different life is. It’s songs like these that remind us how freeing and beautiful love is with the right person. the 80’s themed synth driven “Orange Magic”, another song about her boyfriend JP, and his ginger-coloured hair, once again depicts the joy that Julia is feeling in the moment about living fully in the present with no worries for the future; while the descriptive and compliment heavy lead single “Lie Like This” is the most radio friendly track on the album- with Julia passionately and fervently relaying to us the good times she has with her significant other, that ‘…head on your shoulder, you keep pullin’ me close, I’m spillin’ over, tryin’ not to unfold, I don’t need to tell you, but I’m lettin’ you know, the truth is I can’t resist whenever we lie like this…’.

Love isn’t all sunshine and rainbows though, and Julia reminds us of this fact- as she emphatically delivers a breakup anthem in “Wrapped Around”. Singing to her ex and letting them know that she’s wrapped around someone new and someone who will treat her right; this is a no-nonsense song that is sure to be a catalyst for many men and women to grow up in their own flailing relationships. “History”, a vulnerable and personal track, and a 2-minute melody about wanting to know the history of your significant other (to the point of asking them extremely personal questions!), encourages us to take that extra step with our own significant others if we haven’t already, and to also maintain that closeness and love for each other as the years go by; while the penultimate track “Undertone” eloquently relays to us all that sometimes exes are undertones in our life, that sometimes we can’t move on with our own lives unless we make peace with the past. “That’s The Kind Of Woman” is the final track on Not In Chronological Order, and speaks about the best version of yourself that you could be. It really is the heartbeat of the album- and if there’s one thing this album can teach us, is that we should always keep on striving to be the best person we can be. If we can be a person we can be proud of, that we can love… then that’s the best thing there is, isn’t it?

I am on TikTok, but I use TikTok mostly for fan questions or to talk about the album. I’m not good at doing the trends and the dances and that kind of s***. That’s just not me at all, to each their own—and if  you can, congrats. I use TikTok a lot just to answer questions and talk to my fans, just like on another platform. If they use my songs and they want it and feel connected to do things with them, that’s awesome. Please, by all means, have fun. I’m always interested in seeing other people’s creativity  and how they personify songs and how they resonate with songs and what their creativity makes them see with songs.

Julia Michaels isn’t your normal pop artist… but she does fall into the general pop category, and instead writes ‘thinking man’s pop’. Though the bulk of her songs are about romantic relationships, let me say that I reckon anyone can relate to her music and her insecurities. Not In Chronological Order is probably much more reflective than I thought it was going to be… however tracks like “Pessimist”, “Little Did I Know” and “That’s the Kind Of Woman”, remind us all that life is to be lived to the fullest, and we should cherish the moments right now as they happen. COVID-19 probably will hang around for a long time. But if we take Julia’s advice and make the best out of a bad situation… then can we truly be happy and free? I’d say yes- and Julia seems to think so too. What do you all reckon?

3 songs to listen to: Pessimist, Little Did I Know, That’s The Kind Of Woman