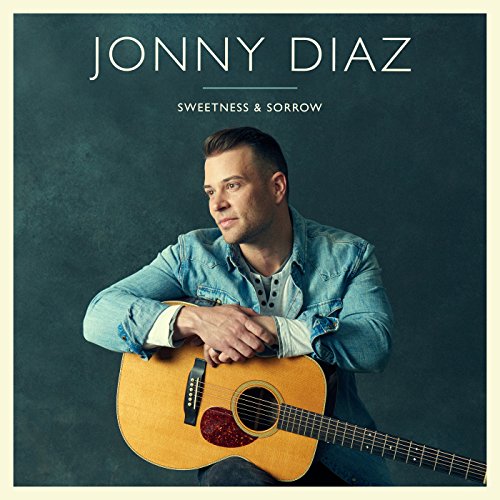 “…about 4 years ago, my wife and I decided to take a leap of faith and open a business together…as the gym grew and started to provide for our family, I assumed ‘this must be my exit strategy for getting out of music’. You see, the road, the pace, the competition, the pressure to make a living has really worn on me. Instead of the clear exit plan I assumed, our gym actually allowed me to return to the heart of why I started playing music in the first place. I didn’t start playing music to provide for my family. I played music because I loved it and felt like God was using my songs…today I release my new EP called Sweetness and Sorrow. It’s available everywhere you get your music online…a friend of mine asked me what my favorite part of recording this album was. My answer was simple- I got to make the whole thing without any fear! I hope you enjoy, but if you don’t that’s ok too!…” Jonny Diaz, the songwriter of “More Beautiful You”, one of the most inspiring melodies about self worth, beauty and identity ever (along with Britt Nicole’s “Gold” and more recently Alessia Cara’s “Scars To your Beautiful”), has had quite a remarkable career since releasing his first album in 2003. Jonny was offered a baseball scholarship in 2002, however he declined- Jonny felt that God was moving him to minister to people through music so instead Jonny has since provided us with plenty of heart-warming and lyrically poignant songs bringing us all closer to God, from the heartfelt ballad “Beauty Of The Cross” that describes how much Jesus loves us to die on the cross for us, to the revealing and sometimes uncomfortable radio single “Break My Heart”- a call to action, where Jonny proactively urges fellow believers to act out their faith and be the hands and feet of the community.

In my opinion (and this is only my opinion though, yours may be different!), Jonny’s songwriting calibre is in the same or similar vein to artists like Bebo Norman, Jason Gray, Nichole Nordeman and Andrew Peterson, and musically reminding me of Brandon Heath, Josh Wilson and Steven Curtis Chapman (and I reckon many listeners and critics may agree with me as well!), as many of Jonny’s acoustic pop melodies have changed the lives of many, while also excelling on the Christian Billboard charts and other radio formats. Though with such a hefty and lofty comparison to many contemporaries of his which are just as popular, or maybe even more so, than him, Jonny doesn’t let these comparisons faze him. This is evidently shown in his latest EP Sweetness And Sorrow, which released a week and a half ago.

After signing to Centricity Music in 2013, Jonny unveiled his newest single “Define Me” in February this year, the first song to release after his sophomore album on Centricity Music Everything Is Changing in 2015, and his label debut Let It Fly in 2014, showing me that Jonny has excelled quite a lot in quality of his penmanship since changing labels. While “Define Me” has a CCM sound, as well as a CCM ‘length’ at 3:28; the lyrics are anything but CCM-ish, and dare I say it, Jonny’s latest offering may be quite controversial. Confused? Did you think I’d shower this song with total praise? Let me explain for a moment…

If “Define Me” has taught me anything, it’s to never place Jonny Diaz in a box…and that’s a good thing. With Jonny’s infectious joyous personality shining through on this new track, the lyrics are all too relatable in a time of global uncertainty. While I hate to say it, it is true that these days the devil is becoming more and more successful at bringing people down, and whispering believable lies to us, so that he can define us and place us in a box. But as the song mentions, there is indeed ‘…One Name above all names [who] defines who I am, allows me to say that I’ve got the victory over the enemy…’; and that name is Jesus Christ. There is hope, and Jonny encourages us to take an active stand against the devil. There’s not too many songs like this in CCM right now, and that is why this left field song in terms of subject matter could maybe be controversial and somewhat ‘heretic’ to the casual listener, in that there’s hardly any mention of the ‘feel-good’ worship music to Jesus. Contrary to perhaps popular opinion though, I reckon a song like this is refreshing, simultaneously providing us with the stark reality of todays’ seemingly bleak spiritual situation and also giving us a beacon of hope for us to rely and lean on, in Jesus Christ. A song that we can cheerfully sing and belt out once we are sure of our firm faith in Jesus and the infinite power He has over the enemy, “Define Me” is an odd choice for a lead single of an album (as well as an outside chance of inclusion on WOW Hits 2019); yet this song is by far the most needed this year. And probably the most impacting. So check it out! Worth a listen, as we use this as part of our arsenal of weapons to defeat the devil.

The rest of the 5 tracks on this short but punchy and impacting EP are just as honest, personal, heartfelt and poignant as “Define Me”, as we are blessed to hear some of the year’s most emotional melodies, and some of Jonny’s finest work I’ve ever heard. Second single “Let Faith Move You” is as CCM as they come, as we are graced with the presence of vibrant acoustic and electric guitars wrapped up in a 3-minute pop tune, where Jonny encourages us to walk out in faith into the dreams God has placed on our heart. As Jonny earnestly reiterates to us that we need to ‘…say the things that are hard to say, learn the life, give yourself some grace, once you get it, give it all away, just let faith move you, pack your bags and take a trip, on the journey of no regrets, you can’t start till you take a step. just let faith move you…’, we are confronted (but in a good way!) by the motivations behind why we do what we do, and hopefully this song can be the catalyst for active change in our lives as we move forward to what God has placed on our hearts (and that goes for me as well!). While “Broken People”, also another 3 minute pop tune, is thematically similar to Matthew West’s “Broken Things”, as Jonny ardently relays to us that we don’t need to do anything to be good enough for God, all we need to do is to just show up, and allow God to use us, broken with flaws and all; “Watch You Be A Mother”, driven by acoustic guitar and with a hint of a country/southern gospel atmosphere, is rather different than anything Jonny’s ever recorded, as he champions his wife for aptly fulfilling one of her many roles as a mother, declaring that ‘…you’re a giver, you’re a lover, you’re a friend, you’re a fighter, fighting for this love to win, so many roles that you cover and you play ’em like no other, but I think that I love you the most, when I watch you be a mother…’.

Comforting and sobering guitar led mid-tempo ballad “Need You Always” is the album ender, and relays to us that we need God always, in the good times and the bad, as sometimes in the good times, we forget that we’re only human, and think we can do everything ourselves, as sometimes we think our successes are from our own strength (when it’s definitely not the case!); however it is “There” which tugs at my heart strings the most. Maybe it’s a satire piece or a real admission of wanting to be more in the spotlight, however this 3-minute guitar led melody, where Jonny channels mainstream artists Jason Mraz, John Mayer and Rob Thomas from Matchbox 20, reveals to us that sometimes, living vicariously through our favourite celebrities’ lives can make us jealous of them and long to be just like them. However what Jonny points out in this track is that we shouldn’t wish for someone else’s life- all we need is right here, as God has put us where we are for a reason that will become clearer in time. So as we hold onto the promise, I am certain that if not now, in the future, we can join with Jonny, and realise that we don’t really want to be ‘there’, but rather ‘here’, where God is doing so much more in our lives than we could ever imagine. If ‘here’ leads to ‘there’ in a few years, so be it, but if not, let us just know that God’s perfect plan is bigger and far greater than our own.

With Jonny Diaz still right now being underrated in the CCM industry, I reckon it is Sweetness and Sorrow that will make him be noticed by…almost everyone I guess. While “Define Me” slipped totally under the radar with no promotion; the same goes for this EP, however these 6 melodies remind us all that Jonny is back to his brilliant best. With Jonny’s newest Centricity Music album being one of my favourite EP releases this year; there’s no reason not to listen to this underrated, and maybe later on the totally not-underrated EP! Well done Jonny for creating thoughtful music. Bring on the next full-length album I say (maybe at the end of 2018 or early 2019! Maybe a Christmas project?)!

3 songs to listen to: There, Define Me, Need You Always