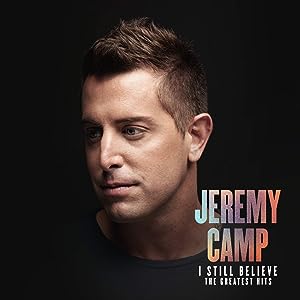 Jeremy Camp has been a seasoned veteran within the CCM/rock/pop music industry for quite some time. Releasing his first studio album Stay way back in 2002, and then releasing studio albums at a steady pace since then, he as become a mainstay on Christian radio and has given to us songs that have filled the homes and hearts of people all around the world. Yes, his musical genre has changed throughout the years, but nevertheless, no one can deny his passion and heart to see music change lives through encouragement and releasing the power of God’s love through the songs he sings and delivers. Now here we are in 2020, and upon the very anticipated movie release and dramatization of his life titled I Still Believe starring KJ Apa and Britt Robertson (and distributed through the Erwin Brothers, the same duo who had their hand in the powerful and emotive I Can Only Imagine a couple of years back), we see Jeremy Camp back again, this time with a 15 song best-of project, aptly and fittingly titled I Still Believe: The Greatest Hits.

Now best-of projects, by any artist, are generally a mixed bag. You only have a finite amount of tracks on an album, and you have to pick the songs that are the most meaningful, but also, songs that have charted a lot on radio, so as to give listeners an option to have a lot of radio hits on an album (sort of like a one-stop place to listen to all things _____ – whoever the artist is), and yes, it’s tricky to give any kind of best-of project without criticism. There will be songs that are missing, there will be songs that aren’t necessarily ‘singles’ but nevertheless included anyway. Jeremy’s best-of album, for the most part, focuses more on his later material via Capitol CMG, while pulling a few songs here and there from his time on BEC Recordings. The good parts of the compilation- the new recordings of both ‘I Still Believe’ and ‘Walk By Faith’. Both are given new, fresh, invigorating renditions, and both remind myself why I have loved Jeremy’s music, especially a lot of his earlier material, and why he indeed is in fact one of the most underrated CCM artists of his generation.

Glancing through the 15 track best-of list, there are songs that are well-deserving, and others that could’ve made way for other songs that are just left out because…well, I don’t know. ‘Christ in Me’, ‘Same Power’, ‘The Answer’, ‘Word of Life’, ‘My Defender’, ‘Dead Man Walking’ and ‘He Knows’ are all present here on this compilation album (spanning his three recent albums I Will Follow, The Answer and The Story’s Not Over), and with now 9 songs out of 15 being from either his most recent three albums or re-recordings, it’s hard to have the remaining six songs span over 6 albums, and not have some omissions that dare I say, is unforgivable. First off, in this compilation, both the albums Beyond Measure and Reckless are ignored altogether, and yes, you know what that means. Songs like ‘Tonight’, ‘What It Means’, ‘Let it Fade’, ‘Give You Glory’, ‘My God’, ‘Reckless’ and ‘Come Alive’ are all absent from such a best-of album, and all songs are definitely missed- maybe a double disc album should’ve been better? ‘There Will Be A Day’ is the sole representative from Speaking Louder than Before, meaning that other as-deserving songs like ‘Healing Hand of God’ and the title track ‘Speaking Louder than Before’ are also not present here on this 15 song album. See my point?

Frankly, 15 songs are too short to give a good adequate snapshot of Jeremy’s career, and thus, this album isn’t as ‘complete’ as we were lead to believe with the title of the album being The Greatest Hits. I mean, surely ‘Take Me Back’ and ‘Restored’, both from Restored, are ‘greater’ in terms of both ‘sales’ and ‘impact’ compared to ‘My Desire’, which is on this compilation, right? Enough said, you know that this album is now not an actual reflection of Jeremy’s career as a whole. Maybe this album can be purchased simultaneously with I Sill Believe: The Number Ones Collection, are more ‘holistic’ compilation focused more on his earlier material that was released way back in 2012? Nevertheless, this album is good, but not great. It leaves much to be desired for any Jeremy Camp fan, like myself. But still, kudos for the re-recordings, but not so much on everything else. Still, can this be the first stop for anyone who hasn’t heard of Jeremy Camp before? Maybe, maybe not. If you love CCM, then yes. If you are more in tune to the harder rock of Jeremy’s music of years previous, then check out individual albums of his past. Jeremy’s music style may have changed, but his heart remains the same. I surely hope that can still be captured in this upcoming movie releasing in March this year. Here’s hoping. Now time to listen to Jeremy’s music non-stop until March when the movie drops to cinemas. Who’s with me?

3 songs to listen to: I Still Believe, There Will Be a Day, This Man