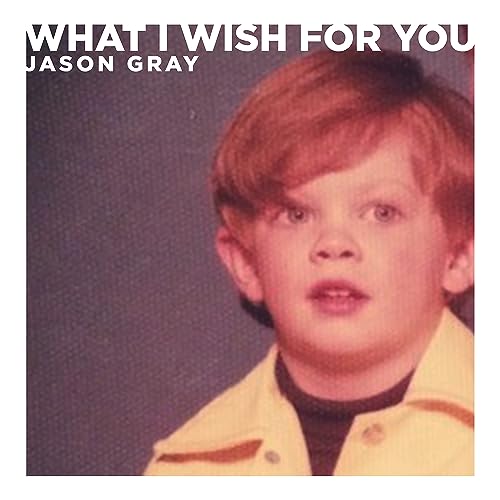 Jason Gray – What I Wish For You – Single (Amazon mp3/iTunes)

Jason Gray, quite possibly one of Christian music’s most honest and heartfelt singer/songwriters, has had quite a journey, personal and musical, to get to the point he is in today. From being a stutterer (and still currently) to changing his last name from ‘Gay’ to ‘Gray’ in order to kick-start his music career; it has been his lyrical poignancy in quite possibly all of his songs to date that makes Jason possess an ability like no other, to write songs that are able to unveil his own vulnerabilities without any attack or stigma, while all the while weaving into the songs a grace that reminds us all that amidst the guilt, shame, pain and hurt, God is still there. Songs like ‘Nothing Is Wasted’, ‘More Like Falling in Love’, ‘I Am New’ and ‘Remind Me Who I Am’ show us the comfort we need, that God redeems us continuously each day from the circumstances and events we are in. His 2018 EP, The Kipper Gray Sessions, was a collaboration between Jason and his son Kipper, and was unveiled to be one of 2018’s most lyrically rich and musically enveloping (encapsulating a myriad of musical styles within the confines of the 5 tracks) EPs. In 2020, Jason gave to us an album I believe, is actually one of the most cohesive and constructive albums he’s ever created throughout his career- Order Disorder Reorder released in October 2020, and by far, is my favourite album of last year. Standing at 18 tracks, Jason delivered some of my very own favourite songs over the last few years- ‘Honesty’, ‘Fight For You’, ‘Order Disorder Reorder’, ‘Remind Me You’re Here’…just the general overall vibe of the album is one of the most cohesive records I’ve listened to, ever since Lauren Daigle’s How Can It Be that was released in 2015. Now in 2021, Jason has given to us another musical offering, this time a track in time for Father’s Day weekend (in America), titled ‘What I Wish For You’.

‘What I Wish For You’ is a song for his children, as is any song released during the time of Father’s Day (or songs can be released by artists that are odes to their own fathers). Where the song stands, we see Jason deliver some pearls of wisdom, things that he has learnt in life, that he wants his children to understand, what he wishes for them in this experience called ‘life’. As the song states, he hopes that his son would experience all the things life throws at him, because he knows that in the hurting and breaking, it is when you can rely on Jesus the most, you can allow Him to work on your vulnerabilities and what He wants your heart to become by the end of the experiences and the ordeals. Not that he actually wants his son to suffer, because that would seem like he is a cruel dad. But knowing full well that this life is full of difficulties, wanting his children to have resilience, bounce-back, and having the experiences of the bad times (because in the bad moments, you really know who your friends are, and know that you aren’t as invincible as you first think you are), is anything a parent can ask for, right? For if we only experience the good times, how are we going to grow? Hearts breaking leads to a sense of vulnerability that comes when unveiling your heart to someone else, while falling down will show you who will really, really be there to pick you up. Failure, of any kind, will lead to the understanding and knowledge that there are limits, even to your own strength. ‘What I Wish For You’ isn’t a song by someone who is sadistic and longs for their child to suffer in every imaginable way as possible. It is by a father who sees value and opportunities to grow during difficult seasons and moments in life, and hoping that your children learn these things, be it through experiencing difficulties themselves, or just by absorbing the knowledge around them, about this.

‘…“What I Wish For You” is a song I wrote for my sons. It’s also a song I wrote for myself and in a way for my dad. Maybe it’ll ring true for you, too. On the surface it sounds like I’m wishing disaster upon my children, but there’s no need to wish for that. Disaster will come whether we want it to or not. Instead it’s a prayer that when disaster comes, as it invariably will, my children will find the goodness in themselves that only disaster can reveal. Elizabeth Kubler Ross, the writer of the stages of grief, wrote this: “The most beautiful people we have known are those who have known defeat, known suffering, known struggle, known loss, and have found their way out of the depths. These persons have an appreciation, a sensitivity, and an understanding of life that fills them with compassion, gentleness, and a deep loving concern. Beautiful people do not just happen.” The best parts of me have stepped forward in the midst of trouble and suffering. This song is a prayer that my sons will discover the best parts of themselves in whatever they face, and become the best, most beautiful version of themselves— maybe even the kind of person who will be able to forgive their dad for the ways he fell short…’

Jason Gray has come a long way through his years of musical service to people. His ability to write songs that speak to our very soul, is one of the many reasons why his music is one of my favourites of late, but let me remind us all of this- Jason is an artist that is by no means popular and that’s ok. But he is in fact impactful amongst those who have been listening to his music over the years, his songs a form of therapy and realisation as we understand that to invite into our stories the section of disorder and calamity isn’t necessarily a bad thing. For a lot of refining and maturing happens when we’re under pressure from life and all the toiling that circumstances can bring, and Jason’s life and music is no different. Disaster will come along the way, and a song like ‘What I Wish For You’ should be viewed with all the good intentions that the song actually has.

Jason’s way of presenting songs as a medium of allowing the Lord to work through every circumstance (and I do mean every!), is something very beautiful, heartfelt and honest, a trait that often people within the CCM culture find hard to do. To be honest means to admit that sometimes we fall, and for an artist already on a pedestal to admit sin, fault and uncertainty can seem like career suicide. But Jason’s career has shown us that to be vulnerable with people doesn’t necessarily mean the end of the road commercially. Sure, Jason’s popularity within the confines of CCM may not necessarily be what it once was, but to be honest is often the best way forward, in any circumstance. Jason writes songs from a place of understanding that it is the broken parts that have the most value to God when He uses us for restoration and healing (ourselves and others that we meet). For it is the parts that we hide away that God looks at with purpose. Nothing is wasted in God’s sight, and if there’s one thing I’ve learnt from Jason and his music (and his song ‘What I Wish For You’) is this- that weakness from a worldly perspective is in fact strength when we see it from God’s eyes.

I find value in the listening of artists that fly under-the-radar, that are unassuming and aren’t always in the forefront of people’s minds when they think about a certain genre of music. I mean, you wouldn’t immediately think about Jason Gray and his music when you think of the words ‘CCM’…and yet, it has been the music of Jason (and other artists like Andrew Peterson, Lecrae, Tenth Avenue North, Skillet and Switchfoot) that have challenged my own faith and has made it much more foundationally solid than it was, maybe even a year ago. ‘What I Wish For You’ is just another track in a music catalogue that has always been great to listen to, and one that I’m to respect, as the months continue to roll on. Well done Jason for such a song as this- looking forward to whatever album/single/EP comes next, whenever that is!