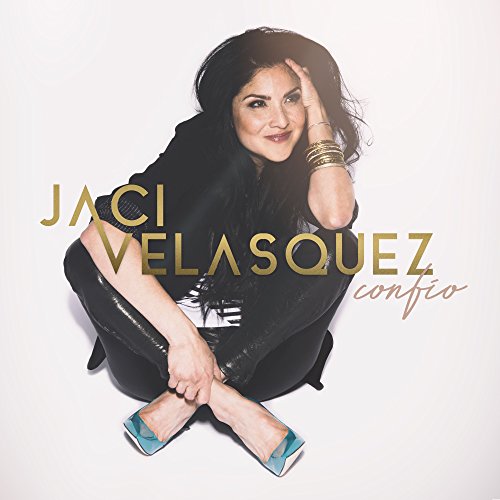 One of CCM’s most respected and popular female vocalists, industry veteran Jaci Velasquez, unveiled her brand new album Trust this past week. Though normally in this industry it’s kind of expected that an artist releases a new album every couple of years, or every 3 years max (longer than that, and you could be forgiven for thinking the artist had quit!); we have seen time and time again and heard new albums from Audio Adrenaline, Plumb, Rachael Lampa, Britt Nicole and Nichole Nordeman over the years, each having had spent time in ‘the wilderness’ so to speak, and each artist coming through and releasing a ‘comeback’ album. Therefore, in some respects, Trust is a testament to God’s faithfulness, that God isn’t done with Jaci as a musical artist.

Having reviewed Trust a few days ago, let me tell you that this is Jaci’s finest work and best collection of worship songs to date. Also releasing this past week is Confio, the Spanish version of Trust, and I loved listening to Jaci’s new album so much, thus I thought a review of Confio was quite deserving, even though I don’t really understand Spanish (even though I did briefly study the language during high school). Even without understanding what is being sung, it helps that I know these songs from Trust inside out, which made this album much easier to listen to. Though lovers of the Spanish language can appreciate the album much more than me, Jaci’s passion still oozes out of each song with fervent urgency and poignant honesty. So…if you have not heard Jaci’s discography before (how could you not?), should you listen to Trust first or Confio? Well, both are the perfect places to start, for those who want to be encouraged by the hope and security we have in Jesus Christ.

With the album as a whole (both Trust and Confio) inspired by Jaci consoling her son Soren, and comforting him one night during a time where he had a bad dream, through the singing and playing of a particular track sent from Integrity Music, the first single from Trust is that song used to soothe Soren and quell his fears. “God Who Moves The Mountains”, was written by Richie Fike, Dustin Smith and David Leonard of All Sons and Daughters, as Jaci powerfully declares that Jesus is the One who can and will move the mountains in our lives. All powerful, ever true and always reliable and faithful, Jesus is the One who is always in our corner, no matter what. As Jaci eloquently reminds us that when ‘…You say speak, we say, “move”, and You say watch, what You can do, You say trust, and then You prove You’re the God who moves the mountains, the God who moves the mountains…’, we are comforted also, by the fact that this all powerful God, knows us and loves us intimately and like we could never imagine, thus we do not have to fear, as He is with us.

With the debut single on Confio being the duet with Nic Gonzales- “Great Are You Lord”, probably the most popular AS&D melody ever, we are glimpsed into an unbridled moment of praise and worship, as both husband and wife glorify God’s name, reminding us that ‘…all the earth will shout Your praise, our hearts will cry, these bones will sing, great are You Lord…’, while Jaci also covers melodies from Martin Smith (“Great Is Your Faithfulness”) and CentricWorship (“Praise The King”), each of them near flawlessly and brilliantly. Though Jaci excels at her covers, it is in the original melodies where her vocals and lyrics shine the most, with my favourites of Jaci including songs such as “I Will Call”, “It’s Never As Dark As It Seems To Be” and “Lay It At The Cross”. And while I could just rehash my review of Trust (which you could just read here!), I’ll instead just offer up what I reckon is what I’ve observed when hearing both Trust and Confio over a few days. Each album is just as good as each other. Never mind that I don’t understand Spanish. It just goes to show you that the barrier of language is non-existent when it comes to music. In fact, I reckon Confio is probably even more impacting and powerful than Trust, simply because of the ‘foreign language’ tag, as I listen more to the atmosphere, music and feel rather than the lyrics here. Well done Jaci for these inspiring 10 anthems that have me singing the promises of God along with you!

Jaci’s 2nd return to Christian music, on a new label, after a five-year hiatus (and a four-year hiatus before that!), is quite a remarkable story. Preparing to embark on a national tour to support her new album, called the “Trust Tour”, along with a full band and her family, Jaci Velasquez has shown us through 2 albums and a collective 84 minutes of inspiring worship to Jesus, that she is still here, and she still is a force to be reckoned with in the CCM industry. In my opinion, Jaci has excelled so much at this album- I love this album to bits, and can never hear enough of it. The songs hold a running theme that God can use whatever circumstance to His glory, and that He is to be praised, because of who He is and everything He’s done, and the music is diverse, yet still originally sounding like Jaci always does, so full of energy! But don’t take my word and opinion- check out Trust and Confio, both already released, and marvel at Jaci’s prowess as a singer and a worshipper! Well done Jaci, hopefully your next album isn’t too long a wait!