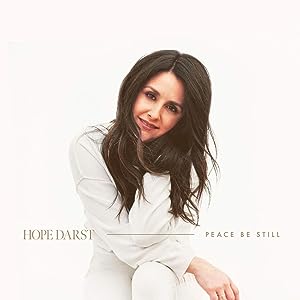 Recently signed to Fair Trade Services, Hope Darst is a newish artist. Yet she is also a veteran singer and songwriter as well! Am I confusing you? Well you see, Hope has been a songwriter and worship leader for her home church The Belonging Co recently, but prior to that, she has been traveling the world for a great number of years- actually over a decade leading worship with Women of Faith, Every Nation Ministries, Christ for All Nations and many more organisations. In 2010 Hope even released a 4 song EP (featuring Hillsong Worship’s smash hit “You’ll Come”), which has now been removed from the internet. Yet the past month, Hope is back after a 10-year absence- this time with her label debut album Peace Be Still via Fair Trade Services.

Written with Andrew Holt and Mia Fieldes, and previously recorded by Lauren Daigle for The Belonging Co’s debut album in 2017; the title track “Peace Be Still” was written at a time when all three songwriters were feeling anxious, fearful and like their lives weren’t in control. As Hope expertly puts in in the below ‘story behind the song’ video, the song came about because these songwriters were just catching up, found out they were each feeling a similar feeling of uncertainty and emptiness, and decided to write the opposite- to sing their way through the storm and through their troubles. Writing and singing about peace when the world they knew was upside down is quite a wacky concept. But as evident in the song and how strong it is lyrically and musically in my opinion, “Peace Be Still” is a winner! As Hope earnestly relays to us with such conviction that ‘…I’m not gonna fear the storm, You are greater than it’s roar, oh, I’m not gonna fear the storm, no, I’m not gonna fear at all…’, we are met with a moment of honesty, poignancy, vulnerability and encouragement, as Hope declares Jesus is greater than any of our feelings, and that we can call on Him any time, and all the time!

The rest of Hope’s album is reminiscent of songs by mega corporate style churches like Jesus Culture, Bethel Music, and The Belonging Co.- heartfelt melodies with big booming choruses designed for Sunday morning worship and extremely accessible to many listeners from different walks of life. Though some critics and listeners and music review websites will heavily critique Peace Be Still for being too generic (like Jesus Freak Hideout), I’m of the opinion that though some lyrics are cliché overall, the heart for Jesus and the passion behind the album still ring true. Peace Be Still may not be my favourite album of the year, but it is an album that will bless and inspire you, especially while COVID-19 is raging on and on and on. This sentiment of us being instantly inspired is evident in the album opener “Surrender”, a 1 minute stirring instrumental interlude to the mid-tempo worshipful ballad “Set Free”, whereby Hope earnestly and fervently highlights the ever-true notion of us being set free from sin and from ourselves because of Jesus. As Hope eloquently cries out that ‘…I’ve been set free, oh, I’ve been set free, sin has no hold, shame has no power over me, found in Your mercy, oh, I’ve been washed clean, You call me whole, saved and redeemed…’, we are met with a resounding declaration of freedom, and the realisation that Jesus Christ has paid the ultimate sacrifice for us- all because He loves each of us! Now that should make us want to live in freedom more and more!

“Promise Keeper”, another mid-tempo ballad along the musical veins of “Set Free” as well as a personal album highlight, delves into the reality of Jesus Christ being a promise keeper, and that we can trust everything that He has said to us in the Bible; while the powerful and prayerful “Sing My Way Through” is a 2 minute spontaneous free worship type track that unfortunately doesn’t work here (but I’d imagine would work immensely in a live setting!). “Who You’ve Always Been” is led by light electric guitar, and is lullaby-ish musically, yet parts of the lyrics could be read in a mainstream-y type of way, and no doubt this song may take some flak and heat, for not being more overt with references to Jesus; however the chilling, haunting and immensely explosive worship anthem “Love Like This” raises the bar of worship by a great amount- with Hope beautifully relaying to us an emotional and compelling proclamation of our love for Jesus Christ, as ‘…I’ve never known love like this, so beautiful, I’ll never get used to this, my heart is Yours, of this, I am convinced, from now until the end, I’ll never know love like this, so beautiful…’.

These days the trend is for worship and CCM artists to be hip and to sing songs that can/could appeal to a wider audience who may not share the same belief as the artist. On Peace Be Still, Hope takes a crack at writing a few ‘Christian but could be mainstream’ songs- with the acoustic guitar led “Don’t Let Go” being one of them. With “Don’t Let Go” still comforting and providing encouragement, we are met with the somewhat generic statement of ‘…oh soul, hold onto hope and don’t let go…just be still and know…’, which may irk some listeners, however I firmly believe that this song is in the right place with intentions- to sing about Jesus and about matters of spirituality to a different audience. It’s admirable, but on this song, it doesn’t really work. Thankfully the poppy 3 minute radio friendly “Let It Out”, though not being that memorable musically nor lyrically, brings the subject matter back to Hope’s strength, of praising Jesus more overtly, shouting out that she intends to let of God’s promise to the world, and declaring His praise to the nations also.

“The Hope Of Jesus”, one of the most vulnerable, hopeful and poignant tracks on the album, fervently and beautifully relays to us that our hope in Jesus won’t ever, ever fail, and that the Lord our God will always be beside us no matter what. “I Glorify” lyrically says something similar, reminding us that ‘…I will always lift You up, over the battle, over the trial, God, You will always be the one I glorify, You are the source, You are the sum of every unseen blessing and victory, God, You will always be the one I glorify…’– and though this track is somewhat musically bland (why so very few upbeat celebratory and joyous songs?), the song nonetheless is impacting and poignant also, as it dives deep and speaks about us glorifying God at all times, in all that we do. Peace Be Still then comes to an end with a piano only song called “Start Over”, a track that once again is lyrically vague and ‘mainstream-y’. As an album closer, it’s an underwhelming track. And though on second viewing I can sort of see that this song could be sung from God to us as an encouragement, I found myself stopping and listening to The Afters’ song of the same name. After all, if “Start Over” from Hope is mean to be a mainstream song, why listen to that when The Afters have already recorded a song that is so much more engaging and musically impressive?

It isn’t known whether Hope Darst will continue to write and sing songs as a solo artist, and release more than one solo full length album. Or will she continue to be at the Belonging Co.? Or will it be both? Only time will tell, but for now, definitely listen to this album as a whole. Some songs are skippable such as “Don’t Let Go” and “Start Over”, and some songs are far more enjoyable and biblically sound than others. However on the whole, no doubt you’ll be blessed. And if you’ve first been introduced to Hope Darst from listening to “Peace Be Still” from Lauren Daigle, then…listen to this one! You’ll definitely gain something from this rendition, and you’ll definitely be closer to God as a result as well! Well done Hope for much needed worship album! May God richly bless you with abundance in 2020 and beyond!

3 songs to listen to: Peace Be Still, Promise Keeper, the Hope Of Jesus