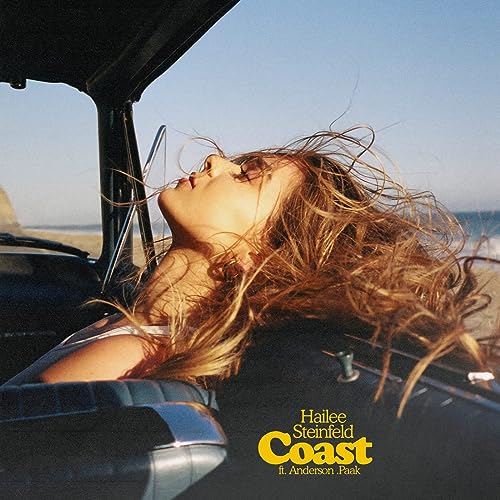 One of the artists who has taken me by surprise throughout the past few years- in a definite good way- has been American actress, singer, and songwriter Hailee Steinfeld. While most fans would know of her extreme talent as an actor in films like True Grit, Pitch Perfect 2, Pitch Perfect 3, Enders Game, Romeo & Juliet, The Edge Of Seventeen, Bumblebee, Spiderman: Into The SpiderVerse and the TV series Dickinson and Hawkeye; I’d say that Hailee’s die-hard fans would know that acting isn’t her only passion and calling. Music has always been on the forefront of Hailee’s goals and dreams- and in 2015 Hailee unveiled her debut EP titled HAIZ. A ton of singles later from the years of 2016-2019… and in 2020, Haile unveiled an EP Half Written Story. We reviewed the EP here– the collection of 5 tracks, that are impacting, and inspiring in every way. While many current pop artists sing about sex and having a good time, Hailee’s lyrical content is on the whole quite different, as she digs deep into the human condition and the human psyche, singing about topics close to her heart, but relevant to all of us as well.

Now at the time I ventured into Hailee’s music in the beginning of 2020, I hadn’t heard much of Hailee’s ventures as a singer and as a songwriter. Sure I heard of her as an actor, but aside from the two Pitch Perfects and True Grit, I hadn’t got around to watching any of Hailee’s films. Yet Hailee’s heartfelt and honest new single and new music video “I Love You’s” circled into my YouTube home page one day (perhaps it was because I had been watching videos in the past of Selena Gomez and Demi Lovato for my blogs, as well as for Little Mix for my upcoming blog at the time!) and I took a chance, thinking ‘why not?’. The result was one of the most hopeful, heartbreaking, confronting, emotional and honest songs I’ve heard all year. Thus I dug deeper through Hailee’s musical discography- I found some gems, decided on writing about her in my Momentous Mondays blog series, and have since been blessed and impressed by everything Hailee has released thus far. While I’d like to go more in depth about Hailee, I think I’ll leave that to my blog and my review about Half Written Story– Hailee’s first EP release in 5 years (and a collection featuring some of her most vulnerable songs yet). But for now, let’s fast forward to now and let’s dive deep into Hailee’s latest single “Coast”. A summery, breezy, acoustic pop anthem about shooting the breeze and chilling and having a great time; this melody features Anderson .Paak on guest vocals, and doesn’t feature much lyrical substance and weight. But there’s still something about Hailee’s songs that are magical and special- and one listen to this summer ‘banger’, and you’ll be enthralled and enamoured by Hailee’s music as well, just like I have.

These sounds are absolutely going to represent a new era. I’ve been living with what I’ve been working on for years now, a couple years, which I really do feel I needed in order to get to where I’m at with the music. And though it is rather frustrating. I have the most patient fans, I don’t know how but I got so lucky.

I am so happy to finally be able to share Coast with the world. This song is deeply personal to me and was influenced by my California roots and the music I grew up listening to with my family. The only artist I envisioned collaborating with on this track was my friend, Anderson .Paak. Knowing he loved the song enough to lend his genius to it is absolutely surreal, and I am forever grateful to have his support. This is only the beginning, and I can’t wait to share the rest of what’s to come with you all soon.

If you’re searching for something lyrically deep, then this track isn’t it. Thematically and lyrically, Hailee’s song speaks about chilling by the beach and living life in the moment. It’s a song that, for all intents and purposes, not really a must listen if viewed solely on the lyrics. But there is a positive, positive, and bouncy musical vibe, and Hailee’s vocals are exquisite, poignant and inspiring. Anderson’s vocals, unfortunately, are out of place here; and no matter the good intentions, this is where the song falls flat to me.

It’s been one hell of a ride getting here….

THANK YOU for your patience, your love and support. I felt every bit of it during this crazy process and reminded myself of it constantly in moments of self-doubt.

Koz, I have felt your trust and belief in me and our project since day 1. You have guided and supported me every step of the way and I’m so beyond grateful. A new beginning. None of this would be happening if it weren’t for you! My guy!!!!

Gabe! Mikky! WE DID IT! Years in the making!! I’m so proud to be kicking off this new chapter with you talented wizards. Forever grateful for the positive energy felt miles away.

Mark, the fact that we got anything done with my endless laugh attacks is astounding. You help me set the tone and vibe in every space we recorded in. So grateful for all the memories…lord, do we have some good ones.

Matty! You made it happen man!! Anywhere/anytime. A mix from the gods!!! Thank you!!!

In the coming years, Hailee Steinfeld will be the name on everyone’s lips. Right now, Half Written Story still seems to be the pinnacle of her musical career. That EP was clearly about relationships and how some end in a way we don’t expect. Yet while it seems that Hailee’s EP is clearly mostly ‘doom and gloom’; it’s obvious that the talent is there, and personally I reckon that this EP is thoroughly enjoyable, as we empathise with Hailee in her plight and only wish her the best and more in the coming years and months. On the other hand, “Coast” sadly isn’t my ‘cup of tea’ at the moment. Sure, it’s a musical poppy track that is catchy. But lyrically the melody doesn’t do anything for me. You may resonate with this song though, so let’s not completely diss this track, when sometimes you need a song to dance to that can be taken not that seriously. There was talk about a possible Half Written Story Part 2, so here’s hoping that Hailee’s next EP or album will be more pop and happier, but until that time, perhaps we need to listen to Half Written Story again (and maybe “Coast”)- and dig deep for the lyrical gold that I’m sure we’ll come across again and again and again.