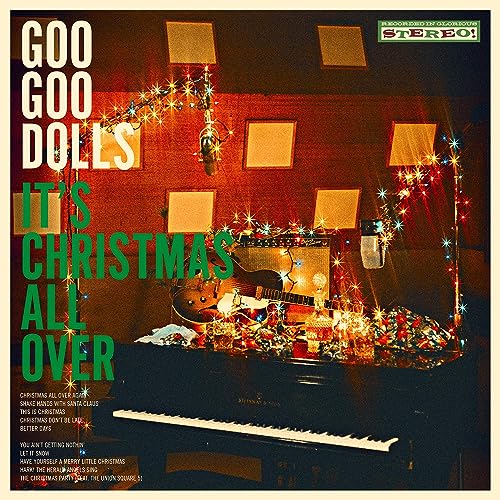 I wrote a blog about the Goo Goo Dolls about a couple of months ago, stating their relevance, influence and importance in modern music history. It was perhaps one of the most out-of-left-field artists I listened to over the last year and a half, in a very, very good way. Johnny Rzeznik and Robbie Takar have created a career that has reminded us of what it means to traverse the line of rock, and radio accessibility. While the band has moved from more of an indie-punk/rock band in their early days, to more of a radio-friendly pop-rock band of today (sort of similar to the transition of music of Sanctus Real over the years); the Goo Goo Dolls nevertheless are still some of the few bands out there that really stand out in all the right ways- creating songs that delve deep into the meaning of life, love and everything in between, all the while keeping up with the music game and presenting songs that the generation of now can connect with. The band’s most recent album Miracle Pill was unveiled to us in September 2019, and once again in June 2020- the former a standard 11 track edition of the album, and the latter, a deluxe 14 track collection. It has been Miracle Pill that has really stood out for me over the last couple of months or so, and certainly an album you can enjoy, if you like similar artists, from Lifehouse and Echosmith, to Sanctus Real and Daughtry. Now again at the end of 2020, the Goo Goo Dolls are at it again, this time with a Christmas album titled It’s Christmas All Over.

It’s Christmas All Over was unveiled to us in October 2020, and for me personally, feels like one of the most cohesive pop-rock Christmas albums of 2020 thus far (from start to finish). Mind you, both Johnny and Robbie are in their mid-50s, and so a transition from grunge-rock (where your vocals are powerful and you’re screaming out the words out a lot), to melodic pop-radio friendly A/C music was always going to happen when the band maybe even realised that reaching some of the powerful rock anthemic-notes was always going to be difficult to reach as time went on. But if you take It’s Christmas All Over for what it is- a pop-melodic Christmas album, it’s pretty good. Standing at 10 tracks; and featuring a re-recording of their chart-topping song ‘Better Days’; this is a set of tracks that reflect the current mood of where Christmas music is right now; and is a wonderful enjoyment experience if you enjoy similar-sounding bands like Lifehouse, Daughtry or even a similar Christian counterpart of the band, Sanctus Real.

‘…My daughter wants a pink jeep for Christmas because her friend has one – those little cars kids drive down the sidewalk. I’m like, ‘That’s so obnoxious,’ Then I’m like, ‘Okay. What the hell.’ If someone had told me [25 years ago] that this is how my life would turn out, I would’ve said, ‘You’re crazy.’ I never thought I’d marry again or have kids, but I got clean six years ago and it was like a metamorphosis…’ Christmas is a time of reflection and looking inward, of reminding ourselves what the true meaning of giving gifts to people really is, and it is in this unknown holiday season of 2020 where an album from the Goo Goo Dolls has come to brighten people up, and to be reminded that such a rock/jazz album as this, can be equally as emotive and profound as an acapella Christmas album from Pentatonix, or an Aussie Christmas album from Delta Goodrem. They all have their place, and each listener can and does gravitate towards particular music genres as opposed to others when they decide to pick their favourite holiday/Christmas carol music. And that’s ok. For it is in these 10 tracks where I’ve found vulnerability and heartfelt poignancy delivered by John Rzeznik and Robbie Takar, as we see newly recorded songs, carols and other fan favourites wrapped up nicely so that people of all holiday-music persuasions can enjoy this album. As I scroll down the track list, my eyes immediately go towards the re-recording of ‘Better Days’, a song originally from their 2006 album Let Love In– this time it’s recorded by band member Jim McGorman’s 7 y.o daughter Sydney, and a song that has a lot of spiritual reference and recognition, of which I delved deeper into in my blog about the band and discussed how such a song as ‘Better Days’ embodies a lot of what people long for in a Saviour. And while for me ‘Better Days’ is the ultimate standout- even on this Christmas album, there are still songs that remind us of the season at hand.

‘Christmas Time All Over Again’ is a cover of a Tom Petty classic; and is a great reminder that such an iconic song from long before, can still be redone and birthed in a way that makes the track unrecognisable to the original, but still nevertheless carrying with it all the emotion and heartfelt memories of the original, at the same time. ‘Shake Hands With Santa Claus’, a 1950s standout Christmas song from vocal legend Louis Prima, is also Goo Goo Dolls-ised; as we see John, Robbie and co.; create a track that ventures them into jazz territory, complete with horns, saxophones, and the like, and for all intents and purposes; the cover comes together without a hitch. ‘Christmas Don’t Be Late’, a song sung, recorded and made famous by the fictitious chipmunk band Alvin and the Chipmunks, is also popularised here by the Goo Goo Dolls, and is a little bit of fun as we see the band present a song otherwise known as a children’s song, here on this Christmas album, a reminder that sometimes, children’s melodies can still permeate and impact the hearts and minds of us adults, as cynical as we often might be. ‘Let It Snow’, ‘Hark The Herald Angels Sing’ and ‘Have Yourself a Merry Little Christmas’ are the three Christmas carols/holiday songs, and are all reminders of what songs that are familiar during this holiday-time can still impact and evoke emotions of togetherness and family, especially during this COVID-19 time of 2020, while the album closer is presented as an instrumental titled ‘The Christmas Party’, featuring the talents of The Union Square 5, and featuring instrumental segments of songs like “It’s the Most Wonderful Time of the Year,” “The Christmas Song”, “Jingle Bells,” “Walking In a Winter Wonderland,” “Frosty the Snowman,”, “Linus and Lucy”, alongside the current controversial track “Baby It’s Cold Outside”- all these tracks blending seamlessly together. The album also features 2 new songs by  the band- ‘This is Christmas’ recalls us to ponder and think about the times before of Christmases we’ve had and to remember the goodness which is Christmas, especially during an uncertain time as this, while ‘You Ain’t Getting Nothing” is a tongue-in-cheek reminder of all the very reasons why someone may deserve ‘coal’ during Christmastime and all the bad things they have done, as we’re reminded ourselves that when everything comes down to it, was as people who are often sinful, are very much deserving of the ‘coal’, but in light of Jesus’s death and resurrection, we are given ‘presents’ unnecessarily and undeservingly.

The band has come a long way since the start in the 1980s and 1990s. And while I’ll never truly know how it’s like to enjoy this band from its inception, what I have known about them is nevertheless impressing me more and more; and reminding me that there are still bands out there that are willing to speak directly to the heart of the person, never compromising message, and never forsaking heartfelt poignancy and truth, for the sake of a ‘good’ popular song. The band have made a name for themselves, both musically and behind the scenes, and for a duo after 34 years, their message still going strong, and a fanbase still active and vibrant- it’s all a miracle, if you ask me. And I know that all good things end, and all things end period. I guess sometimes when you’re in a business of giving oneself to the masses, either in the form of music or otherwise, there is never really a moment where you do ‘retire’ per se- you never have an ‘ending’ to your career- you just move on and your career can look a little different, but your message of connection, emotion, relationship, and themes like hope, asking the questions ‘why’, those things will still be the same. It is a reminder that even as Christians in this life, we must never look at life like as something that we need to finish- we’re always learning and growing, always admitting when we get things wrong, and exploring the things that we believe God has imprinted on our hearts to undertake. Goo Goo Dolls and their career (and especially their 2019 album Miracle Pill and their 2020 Christmas record It’s Christmas All Over), and attitude to life has rubbed off on me in a good way. It has re-evaluated my love and appreciation of 1990s and 2000s music, and for that and that alone, songs like ‘Better Days’ have shaped and influenced my own array and direction of music of late…which is a very, very good thing indeed! Well done to both Johnny and Robbie for creating this great pop-Christmas album, an album that stands tall this year alongside Pentatonix’s We Need a Little Christmas and Delta Goodrem’s Only Santa Knows; and one that’ll challenge us all during this December-time; all the while with pop music that sounds good.

3 songs to listen to: Better Days, The Christmas Party, This is Christmas