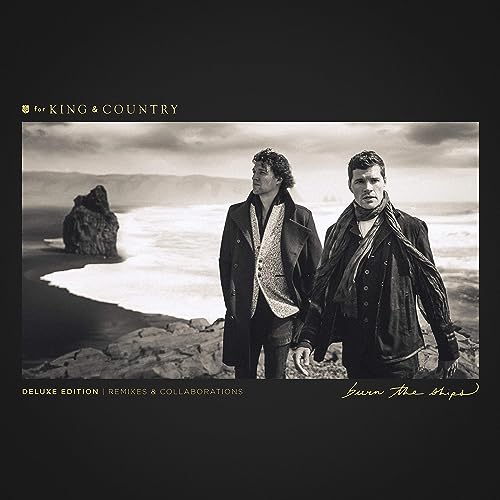 for KING & COUNTRY have always been a band that are a joy to listen to, and no matter the preference of musical genre, I’m sure, that anyone who hears this infectiously hopeful and poignant duo, are sure to be blessed and encouraged. Relatively new compared to a lot of the CCM pioneers that have shaped what Christian music is today (artists like Switchfoot, Skillet, Carman, Steven Curtis Chapman, Amy Grant and Michael W. Smith, to name a few); this duo from Down Under nevertheless have crafted their career in a way that allows the songs they’ve carefully created, to sit with listeners in a reflective way, delving deep within our psyches and challenging the very nature of what we were to believe is true, about ourselves, God, love, life and the rest of it. Joel and Luke have created something special in for KING & COUNTRY, and this is a band that’s certain to make waves, continually in the CCM realm, but maybe, just maybe, in the mainstream market as well- for the band have been a household name for quite some time, ever since their chart-topping song ‘Busted Heart’ hit the radio waves all those years ago, having taken the media, listeners and the whole general CCM industry by storm since their arrival to Word Label Group back in 2011. Relocating to Nashville in the early 1990s as their father pursued a new career opportunity, for KING & COUNTRY has been touted many times as the Aussie version of Coldplay- with a focus more on unique instrumentation and anthemic moments of revelation, realisation and just plain powerful songs full of rousing declaration and proclamation. Fast forward till 2020, and we’ve seen the duo mature and grow in their musical pursuits. Songs like “Fix My Eyes”, “Busted Heart”, “Middle of Your Heart”, “O God, Forgive Us”, “Messengers” [feat. Lecrae], “It’s Not Over Yet”, and more recently “Ceasefire”, and new songs “Joy” and “Amen” are just some examples of the songs that the band has shown us, and the calibre of them. The band has managed to show us what it means to succeed in the CCM industry, while still delivering engaging and thoughtful melodies that encourage us to see and look beyond ourselves, as we challenge the status quo and ask ourselves the continuing question- ‘why’ and ‘why should this be if I don’t agree with the way that it is now’? Topics like self worth, identity, the human condition, and man’s relationship with the creator and the created, are some of the messages scattered through these songs.

2020 saw the band unveil a timely and emotive song to the masses, and a necessary one at that. For I’m sure by now people know about COVID-19, or the more common name for it, coronavirus, and its impact both heath-wise and economically on a global scale, affecting almost every country around the world, for about a year now. We are in April 2021, and personally, I don’t think we’re that close to the virus actually going away. Yes, we have a vaccine, but then there are side effects and trials, and seeing for symptoms of the vaccine and the rest of it. Even still, it is during this time where our physical morale seems to be going under, where I’ve realised that people have been leaning on God more and more- worship songs are being sung like nobody’s business, and we’ve been seeing the Lord move in ways unimaginable in people’s lives around the world. Though we are distancing physically, the connection that we’ve having with people in a general sense seems to be going up, with more Skype calls, more phone calls, even Zoom calls, and just connection through facebook, twitter and every other mobile and technological device there is, especially when there’s lockdown around the world, and more virus strains (most notably the South African variant and the British variant) that are coming to people’s attention within the last few months. ‘Together’ unveiled in May 2020, and featured Joel & Luke with gosel legend Kirk Franklin and mainstream pop icon Tori Kelly; was a song that couldn’t have come at a more opportune time. Premiering this song across a nation needing hope on May 1st 2020, on ABC’s Good Morning America (GMA); ‘Together’ was a reminder to face things head-on united and together, and reminded us all that the only way through this virus is if we all did our bit, we all joined, regardless of belief or value, and just helped our fellow men and women, because it was the right thing to do. Now here we are in April 2021, and on the back of their successful song ‘Together’, and a reimagined version of their powerful radio single ‘Amen’, for KING & COUNTRY have unveiled to us…Burn the Ships: (Deluxe Edition: Remixes & Collaborations).

With for KING & COUNTRY unveiling their latest full-length album in 2018 (Burn The Ships review can be read on this site here), 2021 showcased a deluxe version of the album, three years later, but nevertheless, still worth the wait. Featuring the new song ‘Together’, both the Dolly Parton collaboration and the Echosmith collaboration of their chart-topping single ‘God Only Knows’, a cinematic theatrical version of ‘Fight on Fighter’ (another possible single in the future!), a piano version of ‘joy.’ as well as reimagined ‘Amen’; Joel and Luke have created a space in this deluxe version of the album, for us to respond in whatever way we know how, and for us not to be worried about the person to the left or right (in a metaphorical sense), but to focus on ourselves and our response to such thought-provoking songs that we hear. ‘Together’ is a timely reminder to always find ways to connect to our loved ones and friends, as we understand that the only way out, while ‘Amen’ the song, has been able to hit the nail on the head, as we see the importance of agreeing with one another, and being unified in a way of understanding and realising that things need to be done in this world, help needs to be sought if we want to bring healing to people damaged by this last year of 2020 and all that it brought us. ‘Amen’, as ‘old’ as this song is- it came out in 2018, is nevertheless a great reminder for unity within the body of Christ, and a way for us to set aside our differences and concentrate on what unites Christians, and to move into this year, with that mentality. ‘God Only Knows’, one of my favourite songs from Burn The Ships, delves into the topic of loneliness and suicide, of uncertainty, fake smiles and depression, that is often swept under the rug when it comes to making songs about it within the Christian music industry. To be honest, as of late, it is only I reckon songs like ‘God Only Knows’ and We Are Messengers melody ‘Maybe It’s OK’ that really tackle the issue. And that’s sad, because loneliness and feeling depressed is often a common thing, especially in the music industry where every light is shining on you, and you’re expected to perform 24/7. And thus, ‘God Only Knows’ comes at the right time I’m sure for many who hear this song. It’s a song of hope and redemption, and a song of the knowledge that God knows us in our deepest and darkest, yet still loves us there as well. Joel and Luke have created a gem of a song that’s expected to go far as the years roll by. And with collaborations between the duo and Dolly Parton on a rendition of the song, and between the duo and Echosmith on another, shows just how far the reach of ‘God Only Knows’ really is. ‘joy. (Shadowlands Piano Remix)’ and ‘Fight On, Fighter (Theatrical Remix)’ are the two other additions to the expanded edition of Burn the Ships, and while both these renditions didn’t really stand out compared to the other collaborations and remixes, these two songs nevertheless in their original formats are still great- ‘joy’ encourages us to embody joy within us and be a light shining to the world whenever and whomever we meet, while ‘Fight On, Fighter’ is a keep-on-carrying-on song, a motivational track that can maybe succeed at mainstream radio if the band so choose to send the song there for radio airplay.

So there you are…Burn the Ships (Deluxe Edition: Remixes & Collaborations). One of my favourite albums of the band, Burn the Ships have reminded me of the necessity of the band not just in CCM but in all music too. A band that, with their songs, ignites hope in people that maybe, hope wasn’t there for quite some time; both Joel and Luke have presented an album that is very-much lyrically rich and extremely powerful, as these new remixes and collaborations give to us, a new light and perspective to already great songs. Well done Joel & Luke for this album, maybe, just maybe, more of these songs on the album can impact more of the mainstream community, and perhaps one day, the duo can have a similar impact on music and culture like Lauren Daigle, Lecrae, needtobreathe and NF currently!

3 songs to listen to: God Only Knows, Burn the Ships, Amen