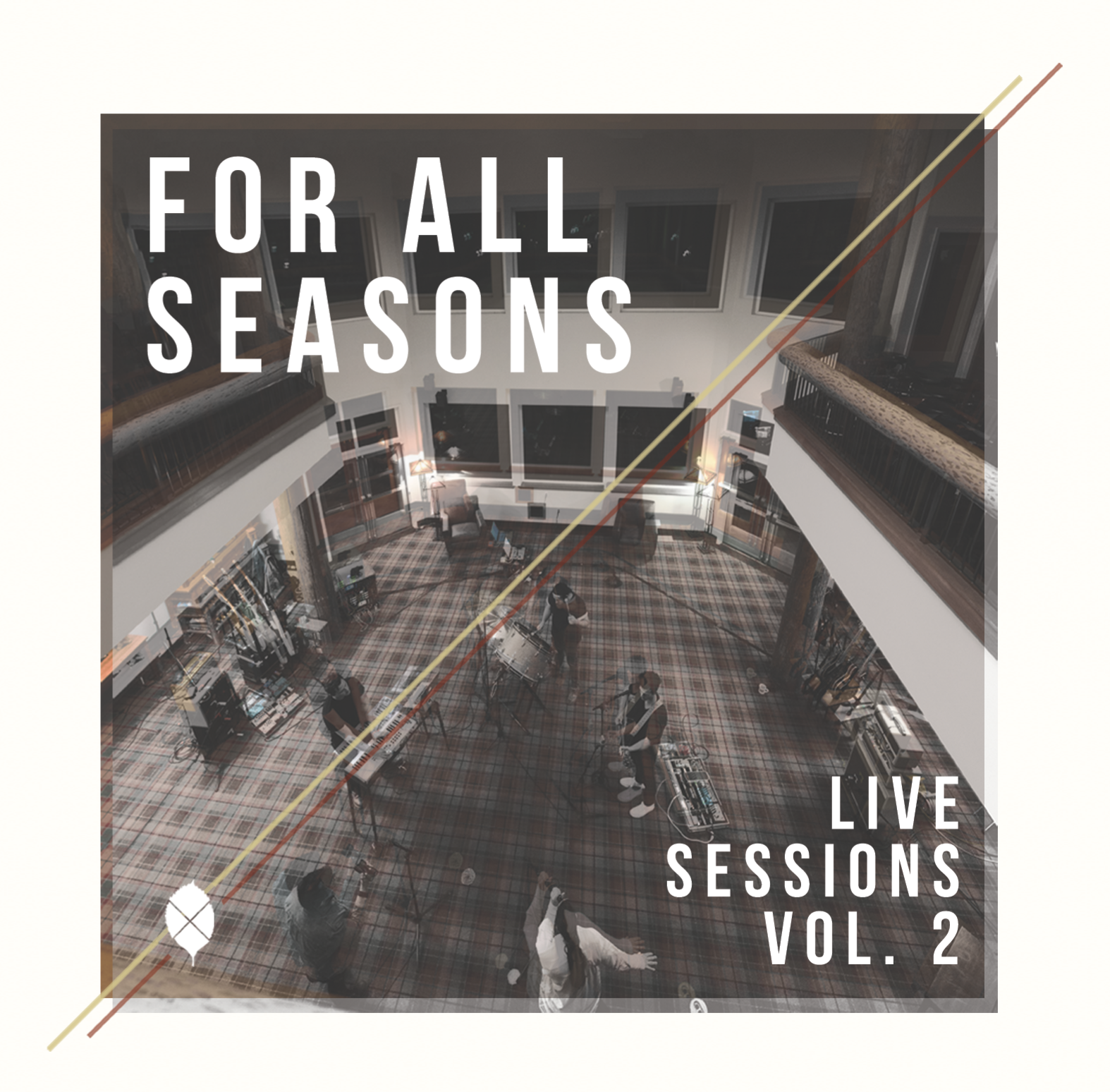 ‘…we have always considered ourselves a “live band.” The live setting is where we thrive and feel most comfortable in our skin. So in early 2015, when we began brainstorming what our next project would be, we knew we wanted it to be live. Normally, a “live” record means there is a crowd involved. But, as we processed and fleshed out what we hoped to create, we realized that what we really wanted to capture was the chemistry of playing TOGETHER. So, the concept for the live sessions was born… it is but a piece of who we are as a band. We will continue releasing volumes of the live sessions, as well as more studio projects that will feature a full spectrum of “worship” songs. But, we hope that this chapter of our creating is able to encourage the local church as well as capture a substantial part of what our heartbeat is as a ministry…’ For All Seasons, a relatively new quintet band from California, rose to prominence with their 2013 live album High Above It All, which spawned the powerful radio hit “High Above It All” (of which Phillips, Craig and Dean covered on their 2014 album Above It All). Fast-forward three years, and one ‘live’ session’s album later, we see the band unveil another set of 6 tracks, aptly titled Live Sessions: Vol. 2. What is unique about this set of songs is that you virtually hear no crowd…which is what the band wanted in the first place. These songs are uniquely crafted and created with just one take- all the vocals and music recorded all at once, with everyone in the same room. No crowd, no distractions, just them, their instruments and voices, all in the same room, and all recorded with one take. Pretty awesome, right? While the band may seem on the surface like any other worship movement that is popular at the moment (think Jesus Culture meets Desperation Band meets Hillsong and you can probably guess what For All Seasons sound like), For All Seasons nevertheless deliver 7 songs full of enthusiasm and passion, and while at times I may have wanted more original tracks and less covers, the arrangements of well-known songs that they do record is nothing short of awe-inspiring and heartfelt, as the band continues to assert their prominence in today’s CCM/worship music scene. This next EP in the series of ‘live’ projects the band has set out to undertake and reveal over the next while; is as encouraging and enjoyable as it was impressive, considering their independent status and how well the production of the project was for these 7 tracks.

Standing at 7 songs, this EP is a mixture of songs we’ve known and heard before (either by them or other prominent and encouraging worship leaders), and songs that have been specifically recorded for this project. Chart-topping song “High Above It All” from their 2013 debut under the name For All Seasons (previously they were releasing albums under the name Reveal), is given the live treatment on this EP, and while I initially heard the song on Phillips Craig and Dean’s Above It All, it has been For All Seasons’ version that has really struck a chord with me. With such raw passion and honesty, lead singer Emily gives us a hopeful and encouraging message, that when everything is said and done, God reigns above everything else we’ve experienced. He is indeed high above it all, and this message ought not to be taken lightly. With a soaring drum beat and a vocal of Emily’s similar to that of Katie Torwalt, Jenn Johnson or Kim Walker-Smith; we are given a song that is destined to be a hit amongst the circle of CCM- it’s not if but when, that this song will be covered by at least one prominent and popular CCM artist…maybe a cover by Chris Tomlin, Passion or Natalie Grant in the future? The song has already seen Phillips, Craig and Dean record a version, and after listening to For All Season’s original, I’m certain that this song will see more cover versions in the future!

In a similar vein, For All Seasons have given us great covers of songs that have reached the corners of the globe in the last few years, ranging from Hillsong Young and Free’s “Alive”, Bethel Music’s “Ever Be” and One Sonic Society’s “Great Are You Lord”. Each one of these tracks have been pivotal within the worship scene lately, and each are executed with such enthusiasm and passion, that even by the covers alone, we can have a glimpse into a band that I reckon will become easily one of the paramount and pivotal worship moments in years to come. One of the most familiar worships songs of late, the All Sons and Daughters written “Great Are You Lord” is given the For All Seasons treatment, and while I personally reckon that no version of any song beats the original recording (well…maybe Hollyn’s version of “All I Need is You”), the quintet make a great stab at the song, as Emily leads a track that presents to us a theme of God’s great strength, that ‘…it’s Your breath in our lungs, so we pour out our praise, to You only…’ “Great Are You Lord” gives us hope and courage, that, amidst the epic and anthemic musical landscape, we find a 5:59 long moment of worship, and one that’ll stand out amongst all the songs on the EP.

With “Ever Be” being a song recently written and recorded by Bethel Music on their 2015 album We Will Not Be Shaken, For A Season’s imagining of this fan favourite has been nothing less than powerful and poignant. With the first cover of the song being on Natalie Grant’s 2015 album Be One, and the second being a recording by Aaron Shust on his EP of the same name; the song embodies all of what it means for us to worship God. It is primarily the chorus that makes me want to break into song and sing alongside Emily, as she fervently reminds us all that ‘…Your praise will ever be on my lips…’, a notion that it is out of our love for our Father because of what He has done, that we will praise Him, not by any other reason. Clocking in at a length of 3:50 (an ‘acceptable’ length if you want your song to succeed on radio), Emily invites us all to declare God on our lips no matter what the circumstance, that in every moment and in every season, His praise should be what we sing about.

“Alive”, the last worship cover on the EP, was recorded in a separate live setting in Camp Pondo, and while I myself enjoyed the original Hillsong Young and Free version slightly better than this recording, the song nevertheless is strong musically and lyrically, and has been a standout song in 2013 when it was originally released. “Alive” is a radio friendly track that invites us into a time of celebration and purposeful declaration to our Father in Heaven; a reminder to us that Christ is alive within us, that ‘…nothing can take Your place, You are all we need, Your love has set us free…’ While the song overall can seem a little cliché at times (in terms of lyrics and repetition of them); the song is good otherwise, boasting a great electronic keyboard and percussion musical backdrop to give us a song that shows us the fun side of For All Seasons, and a track that still has an impact, even 3 years later than originally recorded.

The three remaining songs, “Bigger Than”, “Promises (Your Word Will Stand)” and “Salvation’s Melody” are all originally written and recorded, and present to the listener a side of the band that reminds us all that they can give us great cover songs as well as songs that they had written themselves. In fact, these three songs are the anchor and cornerstone of the EP as a whole, both musically and lyrically…because isn’t it always the case that originally written songs perform better overall than covers in a general sense? “Salvation’s Melody” is the first song on the EP, and complete with a powerful drum beat and an extra-long electric guitar instrumental introduction; Emily presents the sound of a rousing anthem, as the theme of God’s fierce love and His affection for us is shown through this 4:04 track #1. While at times I found myself thinking, ‘Gee, Jesus Culture or Bethel Music covering this song would be great’ (which is actually a good thing, meaning that the quality of For All Seasons’ music is of a similar calibre); “Salvation’s Melody” is a song to sing when we’re declaring God’s sovereignty and salvation over every area of our lives.

“Promises (Your Word Will Stand)” is a subdued acoustically driven melody full of contemplation and reflection, as we meditate on the heartfelt words of how God’s promises in our lives are what we hold onto and what we can rest upon when we feel like we need inspiration; while it is the first radio single “Bigger Than” that has been a powerful standout for me personally. Standing at a duration of 4:23; lead singer Emily Hamilton oozes out vocal similarities to artists like Kim Walker-Smith and Natalie Grant, as “Bigger Than” presents a theme of God’s grand nature to listeners, all the while encouraging us all to rest in Him, because He is ‘…bigger than all my fears, God of love, God my love, You are bigger than all my dreams, God my hope, God my peace, whatever will come my way, through each day I will say, God I trust You…’ An anthem to be declared again and again in its own right, “Bigger Than” has a great melody as the lyrics challenge us to look bigger beyond ourselves as we seek comfort in a God who is big, yet still intimate with each of us. Kudos to Emily and the band for such a great song, easily one of the standouts on the EP, and one of my favourite worship songs of 2016 thus far!

With a variety of EP’s releasing this year, from artists like Austin and Lindsey Adamec, The Rubyz, LoveCollide and Danny Gokey, to Joel Vaughn, Selah, Paul Colman, Chandler Roberts, Rebekah White and Erik Nieder; For All Season’s EP of cover and originally recorded songs somehow leaps to the very top, surpassing all these albums that I just mentioned, to be my favourite EP of 2016 thus far. That is a bold claim, but what I can I say more about the band that I haven’t said already? They’re up and coming, a young band that are talented, and on fire for Jesus, worshippers that give their all in whatever song they sing, be it original or worship covers. A great job well done for a group that I reckon could become the next Jesus Culture or Hillsong in a few years; I am sitting eagerly anticipating Live Sessions Vol. 3 whenever it releases. Well done to Emily and the band for such a soul-stirring collection of tracks. This is a project that anyone who is a fan of worship music can listen to and enjoy. So…here’s to me now posting the review and listening to the EP from the start, again!

3 songs to listen to: Bigger Than, Salvation’s Melody, Promises