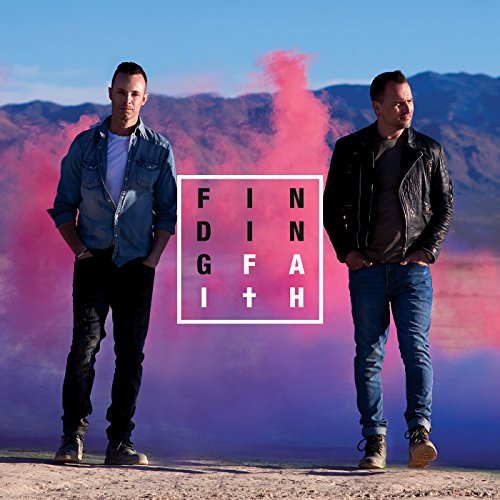 “…God saved me from the lowest point in my life when I was struggling with drinking. It affected my relationships, it affected everything, [and because] I’ve had a very blessed life, even though I did have this faith, I didn’t lean on it. I took it for granted. Through this time, for the first time in my life, I couldn’t just rely on myself. I have 3 children, and two of them were born blind. That to me was devastating. [I thought], ‘How am I going to raise these children with these disabilities, and what that’s going to mean for them?’ I had to come back a realisation that it’s not what God’s doing to me, but the consequences of our broken world. I could hold onto my faith and say, ‘At some point God you’re going to bring something good out of this…” I must confess, as a child of the 90’s, I wasn’t that educated in music all that well. Delirious? and Carman were all I listened to- so this year when I discovered Finding Faith (just through browsing under ‘album pre-orders’ on iTunes one day!), and later found out that founding member Andrew Tierney is also a founder of Human Nature- a prominent Australian band popular in the 90’s- I was intrigued and quietly excited (in the fact that someone respected in mainstream media would have the guts to proclaim themselves to be an active Christian!), but I wasn’t overly over the moon and ecstatic. I knew who Human Nature was, however I wasn’t an avid fan. Yet for this album which released around a couple of months ago- the self-titled debut project of the brainchild duo led by Andrew Tierney and longtime friend Tim Dunfield, knowledge of any Human Nature song isn’t necessary at all. At face value, Finding Faith’s debut project is probably one of my favourite debut albums ever this year thus far. I reckon fans of both Human Nature, and just pop music, or CCM, would thoroughly enjoy Andrew and Tim’s debut album- so let’s dive in and see which songs out of the 12 are hits, and which are misses.

Let me start off by saying that there are no misses here. Despite being an independently produced and independently recorded album, the quality behind the scenes here is top notch. Take “Good Hands” for example. The album opener and the first single is a compelling, stirring pop number, as both vocalists trade lines in the verses effortlessly, eloquently reminding us all that ‘…there’s never been a heart that You can’t change, there’s never been a life that You can’t save, cause the hands that hold it all are good hands…’; and with both Tim and Andrew channelling their inner Plus One and Newsong vocally- I could not think of a better way to start a hard hitting inspirational pop album.

“Love Be The River” is next, and though paling slightly in comparison to the stellar album opener, is nonetheless impacting and inspiring, as we are met with a simple yet effective pop number, detailing that Jesus is the river that washes over us and makes us clean. Musically, this song is  as pop as they come, with plenty of ‘boy-band’-ish influences, and probably tons of Human Nature influences, but I reckon it’s alright, as it reminds us that as long as Andrew and Tim are making faith filled music, these songs can be as pop as they are; what matters most is the duo spreading the love of Jesus to every tribe and nation, and telling the gospel to those who do not know Him yet.

With the acoustic guitar led mid-tempo ballad “Precious Life” being inspired by possible one of Andrew’s children; I’d wager that once you hear this song (complete with a gospel choir adding depth to such a profound track!), you’d be bawling your eyes out. It’s as emotional as maybe Brandon Heath’s “Faith Hope Love Repeat”, and I reckon that even if you don’t have children, this song is necessary for all of us to listen to, as this could be our prayer for future children- for them to be as godly as they can, and walking in the ways of Jesus Christ.

The subject matter turns back to the vertical worship with “God Is Amazing”, a seemingly cliché radio friendly worship song; but a deeper look reveals an earnest, honest, vulnerable and hopeful melody that though is maybe a bit repetitive, is still engaging to listen to, and can still make us excited to hear, as we are met with heartfelt emotion and brutal honesty, that ‘…God is amazing, I can’t believe how deep His love, He’ll be waiting, He’ll forever lift us up…’. The most uninventive and unimaginative track “There Is Love” follows, and while being probably the most cringeworthy musically, is also the only ‘negative’ spot on the whole album- even though the duo’s hearts are in the right place as they cry out ‘…there is love, there is love, crashing over the waves, there is light for the night through the darkest of days…’– it’s hard not to roll our eyes at how horribly simple the track is. Nonetheless, perhaps I’ll connect with the song later on in the future, and here’s hoping that someone will be blessed by the track…maybe.

“Scars And Grace”, a poignant, emotional and hard-hitting piano led ballad, is probably one of the most inspiring melodies on the entire album, and is an album highlight for me. As Andrew and Tim ardently praise God for the scars that He endured for us on the cross, so that we might experience the grace that He meant for us, so that we can be free from sin and with Him in relationship; the duo put on their Michael Tait hat vocally, as we hear one of the most emotional tracks…possibly from any song in 2018. “Bring Down The Heavens” is Finding Faith’s attempt as a fast paced country/bluegrass song, and this works somewhat to a certain degree, as we hear hand clicks, grunging electric guitars and quick acoustic guitar strumming, and a declaratory shout, asking God to let His love surround us, so that we can know of His presence in our lives; while the radio friendly mid tempo synth driven ballad “Overflow” encourages us to always keep seeking after Jesus, the One who allows us to overflow with His love, so that the world might know of His grace and mercy; and the simple yet profound pop 3 minute anthem “Great Day” essentially praises God for every great day as Jesus is for us even if everyone else is against us.

Two beautifully recorded and thoroughly enjoyable covers are also included here, as Finding Faith cover Van Morrison (“If I Ever Needed Someone”) and Hillsong Worship (“Cornerstone”), yet it is the nearly 6 minute “God Of Grace” which sums up with album quite nicely. As Tim and Andrew both relay to us that Jesus is a God of grace, and that He give us grace, peace, faith and the fruits of the spirit, we are met with a powerful and compelling album ender, with the duo ardently giving God all the glory in a chilling, ethereal, heavenly anthemic track deserving of multiple listens. As we are surprised in a good way (well, I am at least!) by the calibre of these songs and the musical prowess of both Andrew and Tim; I am confident that in the near future, Finding Faith will make waves, in both the Christian and the mainstream markets.

“…You know, you can go through difficult times but there is a God and there is a faith that holds you…we just hope that people lean into that even if it’s just to begin a conversation that they’ve never had with themselves or with people around them about this idea of faith and this idea of there being more in the world. We’d be honoured if people went on that journey with us…” While we may not know what happens to Finding Faith after this (it may be a one-time thing, considering Andrew’s gig with Human Nature is still very much alive- or it could be a whole new duo!); one thing is for certain- this debut project rocks! Regardless if you are a believer or not, and regardless if you love Human Nature or not, I encourage you all to check out Finding Faith from Finding Faith. Guaranteed you won’t be disappointed by the stellar harmonies between the two friends, and guaranteed you won’t be disappointed by the strong faith of these two friends also. Sky’s the limit for these two in the future- so take note guys…cause Finding Faith are coming, and are coming with a mission to see lives saved for the Kingdom!

3 songs to listen to: Good Hands, Scars And Grace, God Of Grace