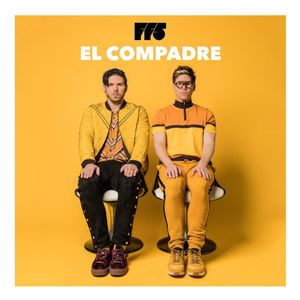 Well, it’s that time again…to review something rebranded, but not really new, and something I’ve definitely reviewed before. After reviewing FF5 EP in January this year, I expected anything new from the band, to be, well, new. But sadly, the latest release from brothers Josh and Jacob Olds, is…interesting and a tad underwhelming, given that there are only 2 completely new tracks. Confused, let me make it a bit clearer. Let me just say that the guys from Family Force 5 are back, having recently rebranded their name as FF5; and they have unveiled their ‘label debut’ as a duo, if you want to call it that- El Compadre (Spanish for ‘friend’). The EP was named after a Mexican restaurant in Los Angeles that has sentimental value for the two brothers, so I guess it was fitting that this EP be named as such as the marker for something new for the duo. As Josh relays, “…As funny as it sounds, a Mexican restaurant has been a milestone in our lives. We had our first meeting when we signed our first deal with Maverick at El Compadre. We had a meeting when we got dropped from Maverick at El Compadre. We had a meeting when we signed to Capitol at El Compadre. We kinda started there, and we keep going back when cool stuff keeps happening…”. If the restaurant makes the band feel nostalgic, then I guess it is taken to a whole new level on this EP, which contains plenty of tracks we have heard before! Does it make me feel excited or cheated? I reckon the naming of the EP was clever, yet for others it may not have worked all that well.

If you want to know a quick history of Family Force 5, then take a read of my review of FF5 EP. So now, are you all caught up? Good. Well I don’t know how many of you knew about FF5 EP, which quietly dropped exclusively on their website late last year, but if you didn’t, then El Compadre would be a breath of fresh air. But as it stands, we are left with songs which are still fantastic, are still engaging, relevant, poppy, enjoyable, meaningful, and every other positive adjective I could think of, but just not completely new, which is a bummer. “Out Of This World”, “Fire On The Highway”, “Sweatband” and “Tiger Eyes” are all present (and not even re-recorded!), as well as the remix version of “This Is My Year” by Matoma (previously on the album Time Still Stands, back when they were known as Family Force 5!), leaving only “Nearsighted” and “Stardust” as songs we’ve never ‘heard’ before. But you may have already heard them, if you went to a Family Force 5 concert last year or the year before, as they played their unreleased album Auditorium in full on the tongue-in-cheek but serious The Label-Won’t-Us-Put-Out-The-Album-Yet, Let’s-Play-The-Whole-Thing-Live-For-You-Before-Its-Out Tour.

So there you have it. 7 ‘brand new’ songs (and it’s funny that some of my album highlights, were tracks already on the FF5 EP, why not release that on iTunes last year, then this year something completely new?)- and maybe they were released as sort of a kudos to the fans, something like the closing of a chapter (because who knows, but I think Audiotorium won’t see the light of day as a full length album!). But regardless, in any shape or form, ‘new-ish’ tracks from Jacob and Josh are always a good thing, so despite the un-timeliness of this release, it’s still good to jam out to and dance to. El Compadre certainly is the start of a new musical and lyrical journey, and I reckon that there will be plenty more brilliance in the years to come from these two twin brothers. So what do we make of the new iteration of Family Force 5 known now as FF5? They may have their critics, but I’m more than excited to be a fan of one of today’s most innovative and fearless bands. I reckon you all should check out FF5 as well! Check out El Compadre on Spotify, and move to some seriously catchy beats. We’ve heard it all before, so let us keep the party going and memorise some dance moves! Let us all hope though, that the next release from FF5 is something that none of us have heard before. And I mean none of us (Except for the band, label executives, producers, songwriters etc!)

3 songs to listen to: Out Of This World, Fire On The Highway, This Is My Year (Matoma Remix)