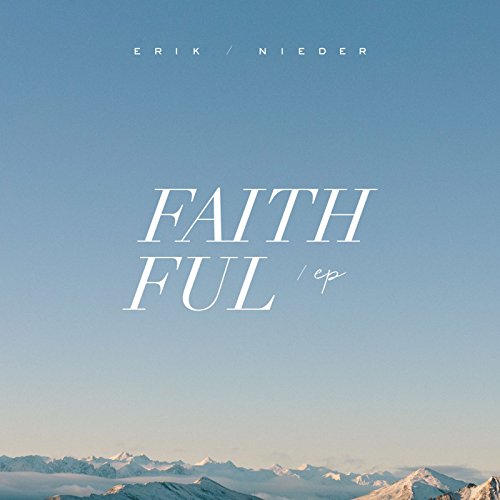 Erik Nieder is fast becoming one of my favourite worship artists who release music independently. Since discovering his acoustic style hymn-like music in 2015 with his release of Valley of the Shadow (that incorporated ‘Dead Man Walking’, a song originally by Erik but recorded by then Fair Trade Services artist John Tibbs for his album release in 2016), I have been blessed to hear such powerful and poetic melodies from an artist that is so much ahead in both maturity and song-writing skills than his late twenties that I’m sure he really is. Usually you come across artists that have a ‘wow’ factor (like Phil Wickham, Jason Gray, Josh Wilson, Andrew Peterson, Tenth Avenue North…you get the picture)- Erik is also one of these artists. With a vocal reminding me of artists like Jars of Clay, Jadon Lavik, Tenth Avenue North and Phil Wickham, fans of these aforementioned artists will thoroughly enjoy Erik’s songwriting and singing style. It was indeed ‘Dead Man Walking’ that propelled not only John Tibbs’ career (though now he is making music independently after a stint on Fair Trade Services), but also is currently propelling Erik’s career to new heights I’m sure. And with every song on The Narrow Sea, Valley of the Shadow, as well as his new songs on Faithful EP having a hymn-like feel (that creates more of a universal appeal that touches listeners who are fans of worship music, hymns and everything else in between), I can safely say that Erik Nieder is a songwriter that has the ability to create modern hymns with anything that he writes, and I know that is a bold assertion but one listen to a variety of songs in his musical catalogue and you’ll understand. What Erik has is a gift and an art, and his new EP is nothing different.

Erik’s music, be it his new song or songs and albums gone by, is unique- many of his songs he has recorded could easily fit in a hymn-book, that’s the quality of his music! And while people may say that this style of writing music may seem a little less contemporary and less energising than other songs by artists like Bethel Music, Chris Tomlin and the like, I say that Erik’s ability to create hymn-like melodies again and again is a skill in and of itself. As Erik continues to release song after song with a hymn-like quality (much of his songs on Faithful EP embody that structure as well), we are indeed reminded that hymn-structured songs aren’t just for the melodies of yesteryear, that there seems to be a power and beauty in hymns, and Erik is creating songs that remind us all that hymn-like songs are just as much needed now as they were a fundamental part of music and society back then. As Erik enlightens us that it was indeed John Newton, the slave trader, that influenced him towards the path of music, we are reminded of the power of a song and what it means to listeners who hear the music. Even if we may not know the story of John Newton and his dramatic change from slave trader to advocate of the gospel of Christ, we are nevertheless still encouraged by his story (google it and see for yourself the story that has impacted millions around the globe in their own quests for comfort and forgiveness).

And so we see the songs on Faithful EP. Much of the 5 song EP we’ve heard before in songs released in the past year or so. In fact, 4 out of the five songs we’ve heard before- ‘Faithful’, ‘My Hope Secure’ and ‘Heaven is Where You Are’ are all present on this EP (from songs released in August 2017, November 2017 and May 2018 respectively), while ‘Faithful’ is also given the acoustic treatment to end the EP, with an acoustic version of a song that I reckon is, for me, one of my favourites of 2017. So therefore…4 out of the 5 tracks on the EP I’ve heard of before. And all of which I’ve reviewed on this site before (check links for ‘Faithful’, ‘My Hope Secure’ and ‘Heaven is Where You Are’)…so why write this review? Why bother at all? Well, firstly, as a whole; these collection of songs, I’d say that this EP is my favourite of the year. With heartfelt songs and hopeful melodies, each song has something unique to say. While I must admit that his newest release ‘Better Than Life’ can seem a little mellow and meandering compared to the remainder three melodies released prior, I still must say that Erik’s gift of creating something unique, beautiful and hymn-like is evident, even in ‘Better Than Life’.

And so for Faithful EP, while the EP could’ve been a little more exciting to hear if the track listing was a little longer, for the songs it does have, Erik’s offering is poignant and heartfelt. Maybe there’s a new musical offering around the corner, maybe not for a while. Nevertheless, one can’t deny the impact and encouragement these songs have had for people around the world over the last year. Here’s hoping that over the next few months, ‘Better Than Life’ can have the same impact that its predecessors have had. A worship leader destined to be part of the next generation of worship songs in months and even years to come, well done Erik for such a prolific and defining EP, even though much of it has been released before in single form. Erik is sure to be on the radar of music executives and record labels in the upcoming months (that’s if he wants to be signed)- but even if he doesn’t and still stays independent, his music will still have the power to reach far and wide!

3 songs to listen to: Faithful, Heaven is Where You Are, My Hope Secure