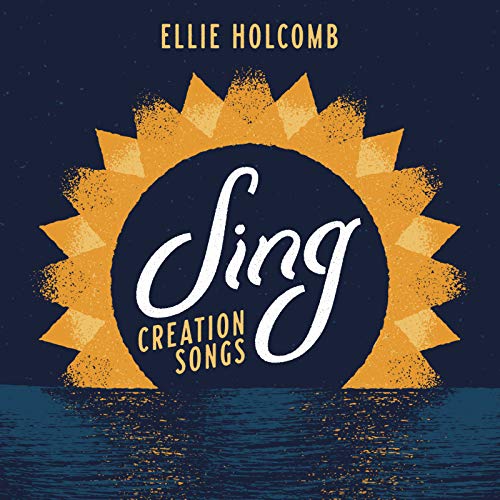 One of the most honest, vulnerable, inspiring and relevant singer/songwriters that I have heard in recent memory, Ellie Holcomb, wife of singer/songwriter Drew Holcomb and daughter of producer Brown Bannister, is no stranger to Christian music. Ellie released her debut album As Sure As The Sun in 2014, and received the Dove Award for New Artist of the Year that same year. If there’s any other female artist I’d liken her to, it’d be to artists like Nichole Nordeman, Sara Groves and Brooke Fraser, as Ellie’s genre of music places her firmly in the folk/acoustic/worship genre- creating melodies that have multi-layered lyrics as well as captivating and resounding music (which is indeed an art to create in an of itself!). While we as a site reviewed Red Sea Road in 2017– I’ll leave you to read that extensive review of how Jon was moved by the uniqueness of the project and how it’s not your average CCM or worship album, but something akin to what Andrew Peterson, Bebo Norman or Jason Gray would release; let me just say that on this new release from Ellie, she breaks the boundaries and runs against the grain yet again. Sing: Creation Songs is an EP that released last week, that is filled with children’s music. Yep, you heard me. it’s the sing-along stuff that I used to listen to when I was a kid when my attention span was shorter. And while I myself have grown up and am not part of that target audience and niche market anymore; it’s nonetheless still evident that Ellie’s music, and this EP, will inspire and provide us with insight about God and the human condition, as she continues to stretch the boundaries of what hopeful, reflective, contemplative and honest music actually sounds like.

Released as a music video and as a lyric video respectively, “Sing” and “Wide, High, Long, Deep” are what you would call the ‘promotional singles’ on the EP. The former is a guitar led mid-tempo ballad and a biblical recount of creation, as Ellie poses the question of who sang the first song, concluding that ‘…now we all know who sang the first song, God who made us knew all along, that every heart and everything was born with a song it was made to sing…’, reminding us all that each one of us has a song deep inside of us- something so unique that makes us…well, us, and we can let it out because it was God who put it there in the first place. While the latter is a stirring piano led worship anthem powerfully declaring that Jesus love is wider, deeper, longer and higher than anything we could ever imagine or comprehend. It’s a bit cheesy, but we have to remember that these songs are written for children, and in that respect, it’s perfect as it’s simple and effective in its message.

The rest of the EP has Ellie singing earnestly about God’s love in easy enough language for little children to understand, yet still containing her signature sound, so that us adults won’t be bored. “Fear Not” is a simple melody, led by emphatic acoustic guitar, highlighting to us that we needn’t be afraid of anything, as Jesus is by our side always, while the theme of worry is expounded upon further in the acoustic guitar prominent reflective ballad “Do Not Worry”, which basically lets us know that Jesus takes care of all of His creation- inclusive of all the animals and the plants, who obviously don’t worry- so how much more will God lavish His love on us, and because of this eternal truth, we shouldn’t worry either- a theme similar to Jason Gray’s “Sparrows”.

“Joyful Noise” has shades of Rend Collective musically, as this incredibly catchy melody is led by banjo (and is that a mandolin I hear?) as Ellie encourages us all to sing for joy and make a loud noise before the Lord because of everything He’s done for us, while “Light’s Always Stronger” is the most CCM song on the project. Co-written with Ben Shive, Ellie delivers the most impacting and encouraging melody on the EP in my opinion, reiterating the ever true notion that the light of Jesus is always stronger than the darkness we are facing in our current situation, that ‘…there’s hope in our hearts, it’ll never stop shining, a hope in our hearts, and it’s brighter than the lighting, a hope in our hearts, that we’re gonna keep finding, the light of the world, He is living inside us…’. The EP ends with the heartfelt and poignant piano lullaby “He Loves Us”, basically imparting to us that Jesus loves us, much more than we can even fathom or imagine, and is a fitting way to end an EP that is much more enjoyable than from first impressions.

With the critical and commercial acclaim of Red Sea Road, one could be forgiven if Ellie Holcomb took a bit of a break- however it’s clear with this release that she’s not slowing down, and that her best is maybe yet to come. With every song on the EP being suitable and accessible to young kids, Ellie also has released a children’s book Who Sang The First Song which serves as a companion piece to this project- and for those of us who are a fan of her previous two albums, like myself; we may wonder whether Ellie is going to be releasing kids music full time or only occasionally. Yet in my hopefulness at Ellie returning to record ‘deep and meaningful music’, I’ve realised that I’ve placed ‘kids music’ as lesser. And that’s not a good thing. I’ve realised that the more and more I’ve listened to this EP the more I’ve enjoyed it. Which is unusual as I am a 28-year-old single male, but I am reminded of the fact that Jesus wants us to be like little children before Him- and maybe it’s as simple as rediscovering the inner child within us, the inner child that I’m sure Ellie helps us all bring out with this inspiring and magical batch of 7 songs. And while I may need some getting used to the fact of Ellie recording only kids music if that does become the case; what I’ve learned through listening to these melodies, is that as long as God is still glorified and listeners lives still have the potential of being changed for the better from listening to these songs- then it doesn’t matter the genre. So well done Ellie for changing my perception of kid’s music- this EP is unexpectedly one of my favourites of 2018, and one that all of us can listen to and be challenged by in terms of our opinions on favourite music types. Whatever Ellie records next, I know I will love. Because she has always exceeded my expectations. Yep even with Sing: Creation Songs!

3 songs to listen to: Sing, Do Not Worry, Light’s Always Stronger