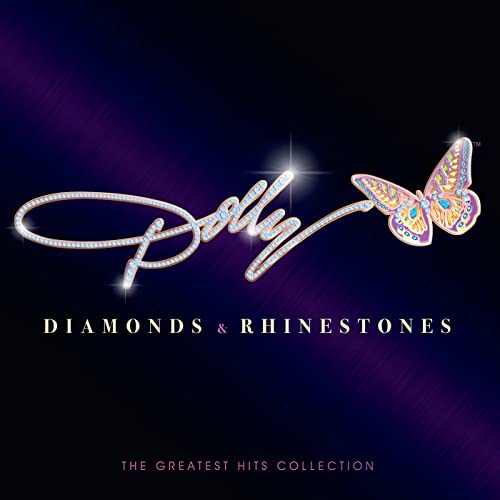 Dolly Parton, one of the most accomplished singers ever, is still making music to this day. She has been a force to be reckoned with within the country music sphere for many decades now, and she has even crossed over the CCM circles, collaborating with Zach Williams and for KING & COUNTRY to name a few. Dolly is synonymous with the smash-hit “Islands In The Stream” (sung with Kenny Rogers, but actually a Bee Gees song!). We ‘reviewed’ her new collaboration with Kelly Clarkson the other month (a re-recording of her hit “9 To 5”); however, we’re not here to write an exegesis about Dolly and her influence. We will write about her in our forthcoming blog about her in our series about iconic and identity building artists– probably within a few months’ time. But… to start the year off in a nostalgic, sentimental, and wistful way, how about we dive deep into Dolly’s latest album- a compilation album titled Diamonds & Rhinestones: The Greatest Hits Collection, chronicling her greatest hits throughout the decades?

You don’t have to be a Dolly fan to appreciate this album. You don’t even have to know all of the songs. Songs like “9 To 5”, “Jolene”, “I Will Always Love You” (made famous by Whitney Houston), and “Islands In The Stream” (sung with Kenny Rogers and originally recorded by the Bee Gees) are all iconic songs and synonymous with music history- and all of these songs are included on the varied 23-song track list. It’s hard to sum up Dolly’s career in 23 songs, but this project celebrates Dolly’s biggest hits (even though it might have been nice to include “God Only Knows” and “There Was Jesus” in this compilation as well). There are collaborations galore here (Kenny Rogers on “Islands in the Stream” and “Real Love”, Loretta Lynn and Tammy Wynette on “Silver Threads and Golden Needles” from Honky Tonk Angels, and “Faith” with Swedish electropop dance duo Galantis and Mr. Probz); while Diamonds & Rhinestones: The Greatest Hits Collection also features songs from Dolly’s films, including “9 To 5,” “Red Shoes” from 2018’s Dumplin’ and “Tennessee Homesick Blues” from 1984’s Rhinestone. There’s something for everyone on this diverse and eclectic track list- and even if you’re not a country music fan, it’s hard not to love Dolly’s music. Diamonds & Rhinestones: The Greatest Hits Collection isn’t the perfect greatest hits compilation. But it is still a hopeful, positive and optimistic musical experience, and Dolly’s passion for life and her overflowing radiance shines through as well!

Every one of these songs has a special memory behind it for me. I hope that you make some special memories of your own while listening to them. Enjoy the Diamonds & Rhinestones album.

While Dolly Parton, a living legend in her own right, answers to no-one, and we all wouldn’t even be fazed if she never makes another album ever again (because she has earnt her right to relax, and she doesn’t really need to explain her decisions to anyone!); Dolly continues to remind us of her class, permanence, and her timeless influence in this album and in every album she has released. The world will mourn when Dolly passes away someday- and so, while Dolly is still alive, shouldn’t we celebrate her legacy with this greatest project?

6 songs to listen to: 9 To 5, Jolene, I Will Always Love You, Islands In The Stream, Coat Of Many Colors, When Life Is Good Again