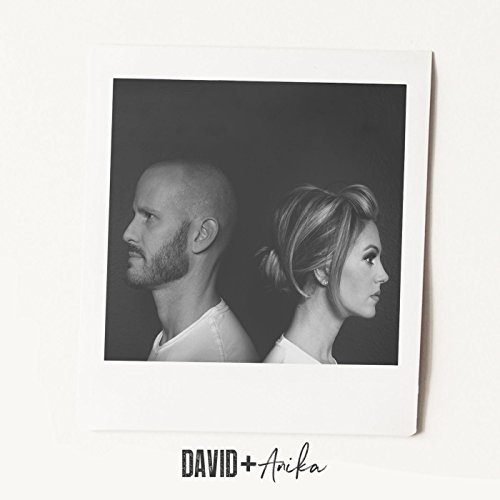 Once in a while there’s an artist that comes out of the woodwork. One that you haven’t heard anything about. Regardless of whether they’re new or have been doing the music scene for years and years (and you’re only just hearing about it all now), we all know that we focus, sometimes a little too much, on our favourite music we’ve been hearing to years upon end, never really straying much from what we’ve been accustomed to for so long. That all changes when we hear something that is unique, way out of the box for us to even consider that we’d listen to it of our own accord. That’s what happened with this new song I’m about to review. If I’m completely honest, I’d probably wouldn’t really seek out the song (let alone know what the song was) if I was just searching randomly on the internet. I was just scrolling through iTunes the other day, and just clicking links upon links, and this song popped up. Upon hearing “Greater” by new worship duo David + Anika; I was pleased- that in fact I was open enough to check out the song, let alone even consider this review in the process, as well as marvelling at how God seems to work, allowing certain moments to occur for us to break free of our comfort zone, for me, comfort in terms of music listening, as I seek more for the unique and different music, yet music that is equally moving and profound- that is exactly what “Greater” is.

I don’t really know much about David + Anika…no, scrap that. I know nothing, about their music, career and ministry. But herein lies my point- often, it is the music by the unknowns that God really wants you to take notice of the most. It is the songs by the independents, the ones who don’t get much publicity because they’re not signed, that seem to encourage us more than the ever-so-popular, the ones that seem to be overplayed on the radio every few hours. “Greater” is one such song where I’ve heard the track, and immediately thought to myself- why didn’t I come across this song before? I guess if you would musically compare this duo to anyone within the CCM industry, you’d pick artists like Love & The Outcome, Austin & Lindsey Adamec, Christy Nockels, Paul Baloche, just worship artists that aren’t necessarily that ‘flash’ or ‘well known’ like Chris Tomlin or Crowder, but rather, worship artists that, to me, have written songs that have impacted my life in a much more profound way compared to the unfortunately over-played worship artists either on K-Love or Air1. Nevertheless, we see a new duo of David + Anika come into the fray with their new song “Greater”. With both husband and wife active members of their local church, Create Church, in Texas; this husband-wife duo have decided, to use their talents and create a song, a song somewhat commonly titled ‘Greater’. Yet when we hear the song, the impact is anything but common. “Greater” is in fact one of my favourite songs of the year- even if I have only heard the song a few times this last day or so. Amazing, right? How an artist I didn’t know prior to a few days ago delivered a song that is now within one of my top 10 songs of 2017 thus far?

“Greater” and its message is quite simple, and is lyrically and thematically akin to One Sonic Society’s track “Great are You Lord”. While the message has probably been sung, and recorded to death, it’s never too much to have another song recorded about the greatness of our God. And who can’t love the track after hearing such poignant lyrics straight away in the first verse- ‘…I see the stars, o the works of Your hands, the same hands that moulded my lungs gave me breath, You caused the world in the galaxy to spin, You’re the beat of my heart, You’re where my life began, and I know I’m never alone, the creator of Heaven is where I call home…’ Sure the lyrics can seem straight from a Chris Tomlin track, yes, but often, it is the combination of lyrics, passion in the singing, the music (which in “Greater” is more of an acoustic atmosphere as Anika sings with earnest passion), and the heart of the song that make up what the track means, to the listener as well as the artists themselves.

“Greater” is a song that’ll hopefully be noticed, not because I reckon this could be the song to make recording companies take notice of this worship duo, but rather, just because the song is a good song- nothing else. David + Anika have showcased a tad-under-5-minute gem, one that’ll continue to be in my iTunes playlist for months. Who knows, maybe they’ll record something later, maybe they won’t. Regardless, this husband-wife duo have such passion for the Lord, and it shows in the song. Sitting in my top 10 songs of the year (so far) with the likes of “The Gospel” (Ryan Stevenson), “A Billion Stars” (One Sonic Society), “Bloom” (Grayson Reed), “Unfinished” (Mandisa) and “Even If” (MercyMe) to name a few; David + Anika ought to be proud of “Greater”, a song that, though under the radar, is quite possibly the song that’ll come out of left field and impact the most, to whomever hears it. Well done guys for such an important and encouraging song. Here’s to the next single/album whenever it releases!