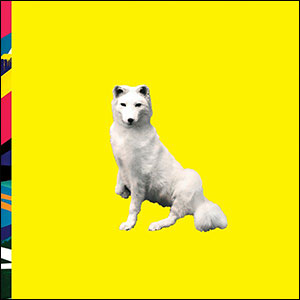 When the David Crowder*Band decided to part ways in 2012, it was a shock to many. Just like many departures from bands around that time as well- Peter Furler from the Newsboys, and Jason Dunn from Hawk Nelson, to name a few, and more recently, Matt Hammitt departing from Sanctus Real. But through the midst of it all, none hurt more than David Crowder leaving the David Crowder*Band. Sure, the Newsboys, Sanctus Real and Hawk Nelson all soldiered on with new lead singers (Sanctus Real are yet to since Matt left within the last few months), yet the DC*B split after David’s announcement- and who would blame them? Would a band want to be called the DC*B without David? Nevertheless, The Digital Age spawned from the amicable split, where four of the original David Crowder*Band members decided to form an alternative/worship project. Songs like “Captured”, “All the Poor and Powerless”, “Glow” and “Break Every Chain” were major hits on their debut album Evening Morning. Yet with Crowder, to silence him from music would be to stop Peter Furler from being bald- Never. Going. To. Happen.

So what happened to David Crowder? A new band of course, complete with new members, all infusing together an Americana/folk/country/worship vibe, and under the moniker Crowder, we see David deliver some of his finest work in the 2014 album Neon Steeple. With powerful and poignant singles like “My Beloved”, “Here’s My Heart”, “This I Know”, “Come As You Are”, and “I Am”, alongside the more recent “Chains”; David looks like he’s not slowing down, and quite right so. With a newly recorded live version of “Chains” featuring a rapping bridge by Tedashii, this is a perfect album for any Crowder or David Crowder*Band enthusiasts, or any fan of worship music with an electronic meets country edge. While it is still sad that the David Crowder*Band didn’t continue, Crowder and the music that is birthed out of the new project is the next best thing. David is going to be within the music industry for a while yet, and this new live EP Neon Porch Extravaganza shows us what it is like to be at a David Crowder concert without being there, capturing all the great musical moments as Crowder and the team continue to be some of the most relevant musicians to the younger generation within the last few years, and into the next few months ahead as well.

Immediately when gazing through the track list, I can see a pattern- that aside from “Hold On, We’re Going Home” on this track listing, and “Come Alive” on the original Neon Steeple track listing, the first half of Crowder’s studio album is as it is on Neon Porch Extravaganza. Why he did not decide to record a live version of songs like “This I Know”, “Here’s My Heart” or “Ain’t No Grave”, we’d never know. Yet the songs that are still present are still great. “I AM”, the first radio single from Neon Steeple, utilises a whole other range of instruments (banjos, mandolins, electronic synths) to create a melody that gives us a unique way of infusing worship with instruments that are relevant and hopefully impacting to a generation who appreciates electronic music much more than their parents. With “I AM”, Crowder relays to us a song etched out of poetic genius. Proclaiming the impacting words of how ‘…there’s no space where his love can’t reach, there’s no place where we can’t find peace, there’s no end to amazing grace…’; “I AM”, and especially the live version where Crowder delivers much more crowd participation than any other of DC*B’s live recordings previously; gives us comfort that God, who is I AM, holds onto us regardless of our circumstances.

“My Beloved”, “Hands of Love” and “Come as You Are” are all standouts on Neon Steeple and are all welcome on Crowder’s new live album recording. “Come As You Are” is a sombre melody in which the theme is directly shown through its very title. As Crowder calls us to lay our burdens down at the feet of Jesus as we come to the foot of the cross and unveil every part of who we are, we can listen to the heartfelt strings and light keys as “Come As You Are”, whilst one of the slowest songs on the EP, is nevertheless one of the most enjoyable and poignant. It’s no wonder why this song is fast becoming one of my favourites from Crowder, ever! “My Beloved”, heavy on banjos, electronic keyboards, guitars and a southern gospel atmosphere, is a love song to our Father, as Crowder calls on his beloved to bring him awake, all the while paying homage to another melody the DC*B has been famous for, as he poignantly declares in the chorus- ‘…I see the light, I see the light, oh thank you God I see the light…’ A musically busy song to impact listeners with a fusion of acoustics and electronics, this is perfect as track 1 of Neon Porch Extravaganza. “Hands of Love”, though a song that I may have glossed over last year, stands out to me more this time around. Fusing together stylistic sounds from both Capital Kings and All Sons and Daughters (to give you a picture of how a typical Crowder concert, in particular this song, sounds like), “Hands of Love” delivers a heartfelt theme for us to ponder and believe- that we are held by the hands of God- the same hands that made the world and gave the life of Christ as a ransom for the freedom and life of each person in all of humanity.

“Hold On, We’re Going Home” is a mainstream cover, originally recorded by R&B artist Drake, and while the song doesn’t have any explicit reference to Jesus, Christ or Christianity, neither does it have any explicit language, and is a song that is reminder, through the repetition of the title of the track, that we are still in a transient place, that our one true home is with Jesus. And then there’s “Chains (Lift Your Head Weary Sinners)”. A song that encapsulates country at its core, with banjos, feet stomping and electric guitar effects that make you really know that this song was recorded in the South; Crowder and his band have shown us what it means to really pull off a mesh of music genres- colliding worship, country and rap all together. While in theory this meshing may seem like a disaster, the introduction of Tedashii in the bridge reminding us all that ‘…I count that, I don’t doubt that, going in I shout that, you don’t see it I’m bout that, this world man, I’m out that, He paid it all, no green backs, with the bruised heel and stained back, the King is back, you’ve seen that, I’ve mean that, redeem that…’ is pure genius. This is a perfect example of how a marrying of genres can work in favour of both artists. I’m sure many fans of Tedashii, who haven’t heard of Crowder, will now check out Crowder’s songs, and vice versa. Kudos to the band for creating a song that’s certain to be a fan favourite amongst fans of Crowder’s music in months to come. Who knows, maybe a re-recording and a shoe-in on WOW Hits 2017?

Neon Porch Extravaganza, just like its predecessor Neon Steeple, is just one great worship song after the other. With the EP standing at 6 tracks long, one could say the track listing is far too short, but Crowder’s enthusiasm makes up for the short song setlist. Crowder’s first live EP is a must if you are fans of DC*B, The Digital Age, or any artist from the Passion Conferences. One of the most progressive, experimental and encouraging worship music EPs of the year so far, Crowder still continues to play his music in an era without the DC*B. Even if bands break up, their music can still impact, and Crowder has reminded us through the EP, and his 2014 album, that a band break up isn’t gonna hold him down- with this EP highlighting some of the most poignant and heartfelt songs of his whole entire career so far!

3 songs to listen to: Chains, My Beloved, I Am