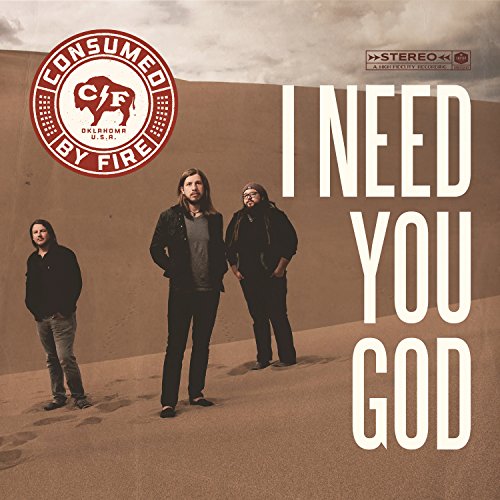 Consumed By Fire– I Need You God (iTunes/Amazon mp3)

Over the years, there’s been a few bands that have been comprised of siblings. For King and Country the most notable, with Joel and Luke comprising of the duo, who are actually in fact siblings of pop-worship artist Rebecca St. James. For KING AND COUNTRY became a household name almost overnight with their song “Busted Heart”, and from there, the rest is history. Then you have other artists like About a Mile (consisting of three brothers) and Red Roots (three triplet sisters), both who have scaled the landscape of worship-rock and country-Christian respectively. While both these 2 artists aforementioned haven’t had as much success as for KING AND COUNTRY, these two bands have nevertheless presented to us albums full of heart and empathy. Now enter in another band comprised of siblings- Consumed By Fire. Signed to Inpop Records, this trio-of-brother band have released a successful album Giving Over in 2016, one that boasted the singles “Lean on Me” and “He Waits For Me”. Musically similar to needtobreathe and Rhett Walker Band (and vocally sounding like Bear from needtobreathe as well), the band’s continuance in bringing together genres of rock, folk, gospel and praise are enough for anyone, whatever your musical genre persuasion, to listen to this band, at least once. Releasing their new song from their yet-to-be-titled new album earlier this month, “I Need You God” and its raw honesty is further proof that Consumed By Fire is quite possibly one of the most underrated bands I’ve heard within the last few years.

‘…this song for us is a heart cry of desperation for God’s hand in every area of our lives. Not just the big stuff, but in every detail. Acts 17:28 reads, “In Him we LIVE, and MOVE, and HAVE OUR BEING”. True humility and faith in God is understanding that we can’t even BREATHE without His grace…’ If ever you have any doubt that Consumed by Fire will hit the sophomore slump, like a fair few other artists in the past (I’m looking at you, About a Mile…sad to say, Trust You All the Way wasn’t as direct and compelling as their debut project), then this song should shatter your beliefs from the get-go. Let me tell you this plainly- Consumed By Fire’s new song is perhaps one of their most real, honest, hopeful and encouraging songs I’ve heard in their whole career, maybe even next to ‘He Waits For Me’, my favourite song from these brothers, ever. As mentioned in the quote to start off this paragraph, we are reminded by the band that this song is indeed a cry for God’s presence and hand to move in all areas of our lives, even during the times where we may not necessarily want God to show up.

A song that speaks about how we ought not to lose sight on the Lord, during the moments when things are going good, and especially during the ones when everything’s going pear-shaped; we are called to cry out in every moment of our lives, to the Lord, declaring that we need Him always, even if we believe at that moment we don’t. Because faith and trust ought not to be based upon feelings, that change from day to day. If we know we need the Lord in every moment, we do, even when we’re in the thick of it and our feelings tell us otherwise. Consumed by Fire have imparted to us a prayer in “I Need You God”, one that’ll hopefully call us out from whatever moment or circumstance we find ourselves in and impress upon our hearts, that ‘…I am gonna lift my hands up high, and I won’t, no I won’t lose sight on You…Your grace never fails on me, so with every breath I breathe, I need You God…’ Lyrics that I’m sure are going to stick with whomever listens for a while yet, these three men of God have presented a song that’s worthy of me calling it quite possibly one of the most heartfelt and meaningful songs in all of 2017 so far!

“I Need You God” isn’t a cry of desperation as much as it is more of a prayer, that we will never lose sight of the fact that we will always need God in every aspect of our lives, even when we think at a certain moment that we don’t. Prayerful and realistic, hopeful and honest; these three brothers which make up Consumed by Fire really have a winner in the making. And while it’s only a year and a couple of months since their debut Inpop Records release last year, this single proves that it’s never too early to write new songs, and if this new album from the band is anything like “I Need You God”, then this upcoming album is one to savour! And while vocally the lead singer may sound like needtobreathe, the vocal similarity is a good thing- people hearing this new music from Consumed by Fire will try needtobreathe, or vice versa. Whatever the case, “I Need You God” is as personal as they come, with the band inviting us to partake alongside them, proclaiming that we need the Lord in all situations, not just the times when everything is going good, or even bad. Well done to the guys for such an enjoyable track, can’t wait to the next album whenever it releases!

3 songs to listen to: I Need You God…until we believe the words that we really, truly, need God- always!