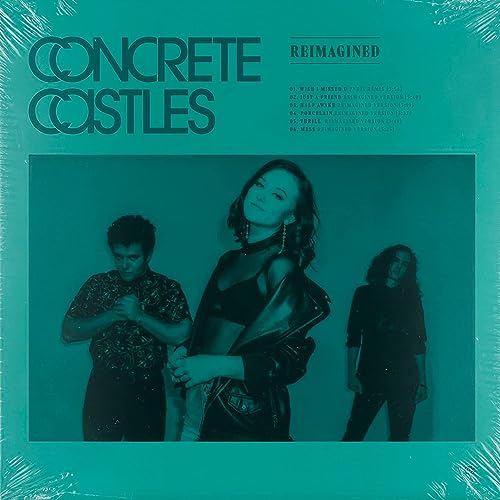 ‘…Concrete Castles, better known prior to this year as First To Eleven, started out as a cover band, and that is how I knew them. I think the first cover I heard them create was a powerful rendition of Avril Lavigne’s ‘Head Above Water’, and I guess everything flowed out from there- in 2021, they’ve amassed plenty of cover songs and videos over the years- enough to fill 10 albums of about 20 songs each (about 200 covers), in the span of 5 years or so. It was through this journey of First to Eleven covers that I discovered my appreciation and respect for mainstream rock music in general. Prior to this year, I was listening to a lot of Christian rock (and still do)- Skillet, Switchfoot, Newsboys, Third Day, Kutless, Audio Adrenaline, DC Talk…not that there’s anything wrong with the music that I listened to before, but I find it unique, intriguing and exciting, that I was exploring new avenues of music, and recognising and understanding that God the Almighty can and may use mainstream music (even mainstream rock music) to encourage us towards something, or even use the songs to illuminate something about ourselves and highlight things about other people as well. I’ve been listened on and off to First to Eleven for a few years, and their specialty is this- create rock covers of popular pop songs. Or just create rock covers of rock songs. Just whatever the cover, it is rock-influenced, and the original…well, let’s just say that most of the band’s covers are so professionally done, that I prefer them to the original. Lead singer Audra Miller’s vocals are always on point, and the band’s professionalism and ability to take a well-known track and cover it with such precision, poignancy, and uniqueness, is something that has always made this band to be one of the most talented cover bands (who specialise in rock music) on Youtube…’

I wrote this quote above as part of my introduction to my review of Concrete Castles’s first debut album. That was around 6 months ago, and since then, my appreciation of them have just become more and more. Primarily through listening to First to Eleven rock covers on youtube, I’ve become much more excited and anticipating of both Concrete Castles and First to Eleven material, namely because they are one of Youtube’s most captivating and heartfelt bands that occupy that digital space. I reviewed Wish I Missed U around 6 months ago, and in it, highlighted songs like ‘Porcelain’, ‘Just a Friend’, ‘Thrill’ and ‘Mess’ as some standouts and highlights from this indie-rock trio. While not just a rocking powerhouse outfit (though it very much helps), this aesthetically pleasing band also have had something to say with their music- ‘Just a Friend’ is from the perspective of someone in a relationship that is questioning and skeptical of the other person in it, and how this persona wants to ask the other if the person they’re talking to, are more than friends or not; while speaks of this issue of standing up for what you believe in, and not being afraid to be cast against stereotypes, to break through the assumptions people make about you and to hopefully prove people wrong if they assume that you are like porcelain, both in a physical and mental sense.

‘Thrill’, a song recorded back in 2018, alludes to the title of the band ‘Concrete Castles’, and speaks of the urgency we ought to have, in terms of doing what we love and knowing full well that we don’t want to wait until we are incapable, to start doing something we know we are passionate about and want to contribute our time, talent and treasure towards; while ‘Mess’, the album ender to Wish I Missed U, is a look at the reality of a broken relationship, and the cause of it- which is something that people generally in society have to address, sooner or later. Because people generally have baggage, even a series of partners and failed relationships; when two people come together to form a relationship bond, they’re bringing with them all the unsaid expectations and assumptions along with them. So, if someone has a ‘one that got away’ person in their past, the current relationship and that person won’t ever live up to a certain idealistic (and maybe even unattainable) standard, and when you place something on someone that you know deep down that they can’t even reach, that is when they walk away. And we become shocked when our relationships fail. ‘Mess’ chronicles a relationship at its worst; and highlights the things we need to do to change it all- don’t have expectations of a partner to reach the standards of a previous one. Easier said than done, this song ought to be one to reflect upon, multiple times, as maybe in our own lives, we’re placing expectations on people that we don’t even place on ourselves- for to always live in someone else’s shadow can really create a sense of mistrust and distrust in any relationship someone has, going forward.

Fast-forward to 2022, and Concrete Castles released their 6-song Reimagined EP, featuring re-recorded laid-back versions of ‘Thrill’, ‘Mess’, ‘Porcelain’, ‘Half Awake’ and ‘Just a Friend’, and a remix version of ‘Wish I Missed U’. The EP, titled Wish I Missed U (Reimagined); features some of the band’s best songs from their debut, redone in a very unique way as we see this rock outfit in a new alternative light. While there’s not really much to say about these songs themselves (they can be read in my review of their studio album, linked here), what I will say about this trio is this- that Concrete Castles (and by extent, First to Eleven) is one of Youtube’s most talented acts to have come out of this digital space over the last 5 or so years (also inclusive of artists like Pentatonix, Peter Hollens, Cimorelli, Jackie Evancho and up-and-coming Lucy Thomas as well in such a powerful and prolific list of underrated artists and bands). Both the albums Wish I Missed U and their acoustic EP are great evidence of this. Gone are the fast-paced rock undertones of these re-done tracks, but that doesn’t mean that these new versions are any less emotive and heartfelt. These songs still have the same character and charisma as they did before. I may enjoy these redone versions even more than the originals.

Concrete Castles are a band that are just starting out, but at the same time, feel as though they own the Youtube space. Audra, Matt, Ryan & Sam are veterans at this Youtube thing, and it shows in both Wish I Missed U and their acoustic 6-song EP, even though this is their first foray into original music. a must have for anyone who’s fans of their cover band First to Eleven, or other rock bands like Hoobastank, Daughtry, Skillet, Switchfoot, Imagine Dragons, Ava Max or even OneRepublic; Audra and co. have created something that can hopefully last for a very long time, and maybe, just maybe, God can use their music to impact us all along the way. Well done Concrete Castles for this powerful acoustic EP. Maybe even better than the original album. Looking forward to people being impacted by this music in the upcoming weeks and months ahead.

3 songs to listen to: Thrill, Just a Friend, Porcelain