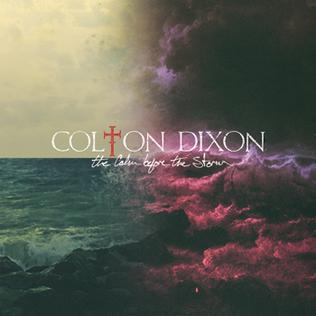 Eliminated from American Idol Season 11 in 7th place, pop/CCM artist Colton Dixon has been making waves within the CCM industry ever since his highly publicised crossover hit of a first album A Messenger that debuted in 2013 to critical acclaim. Using the same platform as many artists, like Carrie Underwood, Danny Gokey, Mandisa, Jason Castro, Daughtry, Kelly Clarkson and Kris Allen; to start a career in music; Colton’s unexpected exit from the show was more of a blessing in disguise. Signing a record deal with Sparrow Records, and 2 albums later; Colton now delivers a remix and acoustic album, titled The Calm Before the Storm. Essentially 2 EPs, (Calm EP features 4 songs acoustically rearranged and one new track, while Storm EP delivers 5 songs from Anchor remixed by today’s most respected and revered DJs); this is a must for any fans of Colton’s previous two albums. About a year since Anchor released, this new release from Colton is welcomed by myself as I eagerly anticipate what he has in store next- with not even 2 years between A Messenger and Anchor, I expect nothing less when releasing album 3…maybe early 2016 sometime?

With the piano playing the most prominence in Calm EP, Colton takes us on a journey that emphasises more so on lyrics as they are emphasised with minimal instruments. A standout is “You Are”, the first radio single from Colton. Lengthened by a minute, Colton invites his younger sister Schyler Dixon to sing on this radio hit, and when I hear her sing, I can definitely tell that it’s not a matter of if, but when, she will be signed by a major Christian record label. A song that encourages us to focus our eyes on Jesus as we declare alongside Colton that ‘…You are the song, You are the song I’m singing, You are the air, You are the air I’m breathing…’, this rendition is arguably my favourite acoustic rendition by Colton in Calm EP. And while I actually enjoy the piano-only original recording of “Through All Of It” better than this acoustic guitar sped-up version of the song, Colton nevertheless places a different and unique spin on this already awesome melody that reminds us all that God is with us through everything we experience, the good and the bad. Heartfelt and sincere, we are to contemplate the powerful lyrics, that ‘…life’s been a journey, I’ve seen joy, I’ve seen regret, and You have been my God through all of it…’

“Never Gone”, a poetic metaphor about the lost son and the fact that God never wants to lose any one of us to the darkness of self and this world, is delivered with passion, a glockenspiel and an absence of drums in this version; reminding that the lyrics can have just the same impact in tranquillity as it can in the clutter of guitars and percussion; while “Limitless”, an encouragement to many that we are limitless when we side with the God who can accomplish the impossible, follows a similar melodic structure compared to the original, except with electronic keyboards that sound like something Owl City would compose. Rounding out the EP is “Where I End”, a newly recorded song about us taking leaps of faith because where we end because of our fear, God starts and imparts faith in us to take the journey into the unknown. A pop/radio friendly melody that is a nice segue between acoustic and remix, expect “Where I End” to receive plenty of radio airplay in months to come.

The remaining 5 tracks head into remix territory, as Colton invites us to place on our party and dancing shoes and embrace songs like “Dare To Believe”, “Anchor” and “Echo” in a whole new different light as each of these songs feature some of the most unique and powerful effects to place Storm EP as one of my favourite remix EPs/albums I’ve heard since Newsboys Remixed way back in 2002. Four remixers in the code names of PRO_FITT, BLRZ, JSapp and Neon Feather contribute to the songs, and while some melodies are more enjoyable than others; each one of these four DJ’s have uniquely altered the tracks to present a side of the songs we as listeners of Colton’s music have never imagined prior. “Echo” is transformed into a nice radio friendly Owl City-vibe melody, and I wouldn’t put it past Capitol Christian Distribution to make the remix version of “Echo” an actual single in the future, while “Anchor” remixed by BLRZ is much more engaging than the original. PRO_FITT’s contribution to “More of You” sadly doesn’t seem to enhance the song in any way, shaving off a minute or so as the song is seemingly rushed- to the point where I even had to stop the song for me to catch a breath. “Back to Life” and “Dare to Believe” are the remaining two remixes, and while each of them feel a little unnecessary, considering that both these remixes change very little when comparing them to the original tracks, these two songs nevertheless are interesting and enjoyable renditions of songs that are standouts on Anchor, and standouts even throughout the whole Colton Dixon song catalogue as well.

Colton’s songwriting skills way beyond his years, and the ability to transform songs into stripped down acoustic renditions are reasons alone to check out both Calm EP and Storm EP. A maturity in his writing and musical arrangements over the years; Colton’s first compilation EP on Sparrow Records is sure to receive much praise from both the Christian and mainstream music industries in the months to come. Finding his niche market in CCM/rock, the great variety of genres and styles on this EP/album, from piano only, to acoustically driven, anthems and electronic music; The Calm Before the Storm is a standout in September 2015, and one to take notice of if you are a fan of Colton’s previous work, or enjoy similar artists like Kutless, Switchfoot or Lifehouse.

3 song to listen to: Echo (Neon Feather Remix), You Are (feat. Schyler Dixon), Through All Of It