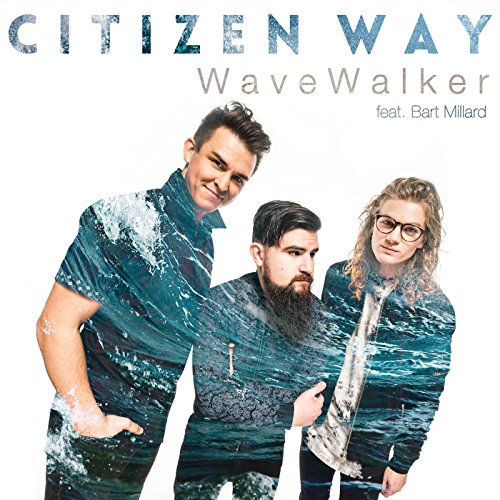 If there’s ever a band that no matter what they release, no matter how cliché it is, you’ll just love the song because of their infectious, contagious joy of their music craft in general; then I’d have to say that that band is Citizen Way. Comprised of Ben Calhoun, David Blascoe and Daniel Olsson, Citizen Way have been around since 2004, yet have only released music on a label (Fair Trade Services) since 2013. While you can read our review of 2.0 here, let me tell you some hits they’ve recorded- “Should’ve Been Me”, “How Sweet The Sound”, “Nothing Ever Could Separate Us”, “Evidence”, “When I’m Wait You”, “I Will”, and more recently “Bulletproof”. Now let’s add the latest future-smash hit “WaveWalker”, featuring the guest vocals of Bart Millard.

One listen to “WaveWalker”, and you’ll probably think you’re listening to “Bulletproof”. That’s probably because it’s nearly the same tempo, and is led by the same instrument- the electric guitar. As lead singer Ben ardently and passionately belts our inspiring lyrics, in quite possibly the same mannerisms as in “Bulletproof”, you could be forgiven for thinking that it is that same song. But if you think the band lack creativity, think again. For in the chorus there is water imagery, as Citizen Way subtly reference that we can now ‘walk on waves’ aka conquer our adversaries like how Peter walked on the water. As we powerfully sing out along with Ben that ‘…I’m a wavewalker, I’m dancing on water, when the devil tried to shake me, I just pray harder, even in my darkest hour, got Holy Ghost power, when I keep my eyes upon You, Jesus, I’m a wavewalker…’, this anthem is such that we can declare and should be able to, in our darkest times and in the brightest of times, as with Jesus all miracles are possible. Even walking on the water.

With a brand new album releasing later on this year, Citizen Way wear their heart on their sleeve, as we are surely immersed in what is a surefire hit song for 2018. And as we wait for a brand new album from these men of God, why don’t we dust off those dancing shoes? It’s time we need it as we prove to our loved ones that we are a wave walker, by at least trying to mime on the dance floor the act of ‘wave walking’! Well done guys, and well done Bart for enhancing this song through your brilliant vocals! Bring on the as of now unnamed studio album #3!