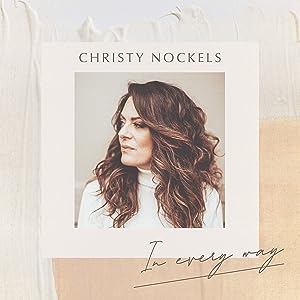 Christy Nockels has always been an underrated worship leader over the years. Since making her career with duo Watermark (basically her and her husband Nathan Nockels formed the duo), Christy rose to prominence as a rising star amongst Passion Conferences and their music ministry. Over the years, Watermark (and later on Christy when the duo disbanded and Christy ventured out to release new music solo) would offer up heartfelt melodies and emotive songs that were always highlights on every annual Passion album. Nowadays, Passion and their music releases aren’t the same that it used to be…and maybe that’s ok, maybe that’s too much change in one go, but in every Passion music album release over the last little while; artists like Christy Nockels, Charlie Hall, Matt Redman and Chris Tomlin have seemingly been passed over (intentionally or not, we don’t know) in favour of other Passion artists like Kristian Stanfill, Brett Younker, Melodie Malone and Sean Curran (formally of Bellarive fame). Regardless of whether Christy will ever be on a Passion album again, her music is still relevant and emotive now as it was when she first started.

Since starting her solo career, Christy has released album after album full of powerful songs for the church- 2009 showed us Life Light Up, one of my personal favourite worship albums of that year, with songs like ‘No Not One’ co-written with Brandon Heath, “Life Light Up”, “A Mighty Fortress” and the Brooke Fraser written “Hosanna” showcasing some of the highlights on such an album like this. In 2012 she unveiled to us another project in Into the Glorious with smash hits and favourites inclusive of “Everlifting”, “Sing Along”, “Waiting Here For You” and “Healing Is In Your Hands”. And while I myself haven’t really listened to fully her live album Let it Be Jesus, I know well that that 2015 album was also a standout of that year too. Christy also unveiled a cover of the Housefires (and subsequently Pat Barrett) hit, ‘Build My Life’, and now in 2019, she is at it again, this time a song called ‘In Every Way’!

‘…these days I don’t just step up to the mic and belt out a song, but I do so with fear and trembling. Partly because it’s super vulnerable and partly because in a post-truth culture, it’s no small thing for any of us to belt out what we believe to be TRUTH. So it’s with a little trembling, but a lot of excitement, that I announce my NEW SINGLE, “In Every Way” comes out 2/08!…’ I’ve always admired the passion of Christy in her music, and that is nothing different with ‘In Every Way’. Honest and hopeful, emotive and encouraging, Christy’s enthusiasm and passion amongst many female worship leaders is often unbridled and unprecedented. We are met with almost every emotion when it comes to hearing her vocals in ‘In Every Way’, the expectant hope and longing, the angst that comes when anxiety and hope are married together, and the ever present assurance and comfort that comes with knowing that God is who He says He is, regardless of who we are in the process. It is something we all can hold onto, knowing that we will need to hold onto truth and constant values in times of potential wavering, for whatever reason.

Co-written with Jason Ingram (like every other great worship song!), Christy imparts a theme that is very much needed in today’s society, no matter how many times this theme has been sung about in the past- it is a song that allows us to sing in new fresh invigorating language what we want to express so long to the Lord, but often don’t know how. It is a song about acknowledging that there are broken things in our lives, but all the while giving hope that God is the same yesterday, today and forever, and that is something worth praising Him about. It is when we realise that being steadfast and constant is who He is (that’s His nature), there’s less pressure off of us, as we move from anxiety to angst and hope. Many people have often found that angst is a bad word, but I’ve read somewhere in a Christy Nockels Instagram post not too long ago about something that has literally changed what I used to think about angst and its place in the Christian walk of life:

It’s one of those weird words, like when you type it out you’re like, did I spell that right? Also, I’m not making it a habit of living life according to the urban dictionary, but I gotta say, I think they got this one right. I’ve talked about the word “angst” many times on my podcast and even encourage worship leaders to lead with a bit of angst…at least angst as it’s described here: “Angst, often confused with anxiety, is a transcendent emotion in that it combines the unbearable anguish of life with the hopes of overcoming this seemingly impossible situation. Without the important element of hope, then the emotion is anxiety, not angst. Angst denotes the constant struggle one has with the burdens of life that weighs on the dispossessed and not knowing when the salvation will appear.” Note that this above definition, as provided by urban dictionary, says ‘when the salvation will appear’, not ‘if’!

Because of Christ and the hope we have in what He has undertaken on our behalf for us and everyone in human history; we can comfortably and confidently move from anxiety to angst, to utter and complete peace, knowing full well that God is who He says He is, and that is enough in certain circumstances. ‘In Every Way’ reminds us of this very fact, that God is our source of life and drive, of energy and determination. A song that stands out amongst many, many releases in 2019 thus far (both singles, EPs and albums alike!); Christy ought to be commended for such a vulnerable song that is certain to convict and challenge whomever hears the track, myself included. The first single out of an extended EP/album project in the future? Who knows. As I sign off on this review, let me leave an inspirational Instagram post from Christy about her song, because, who can really and fully summarise the song and its message, than the artist who wrote it, herself?

If I had to narrow down my deepest passion in life, it’s to communicate with the living God and to help others know that they can too. Writing songs is a big part of that passion so I’m truly so excited to release, “In Every Way”! My hope is that this song offers fresh language that enables us to draw near to God and tell him what our hearts long to say. I welled up with tears a few times while recording this vocal. I don’t know about you, but everywhere I turn there seems to be pain, suffering and confusion, and these days my heart is heavy for friends who have been walking through unimaginable circumstances. As we worship, we hold the tension of acknowledging what’s broken, while in the same breath, proclaiming PRAISE to our God who was, and is, and always will be God – from everlasting to everlasting. The verses of this song sets up the truth that He IS God and the chorus gives us the chance to acknowledge it again “It’s who You are, You never change…it’s who You are, in every way”. The bridge is the one I cried through the most, it says “I know, You do all things well!” That’s a proclamation, right in the middle of all our most complicated plot lines. It’s also TRUST, right in the midst of our biggest questions. We believe it God, we acknowledge You. You are God and You do all things well.