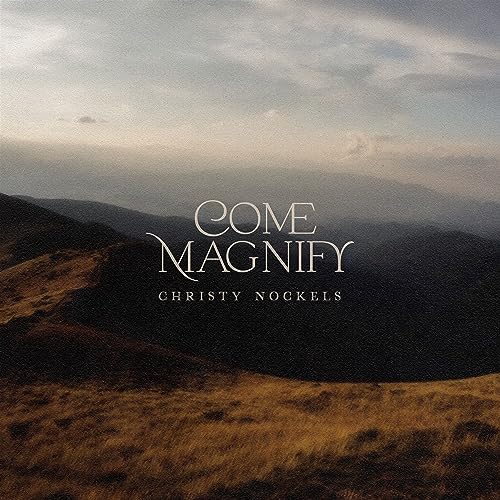 Christy Nockels has always been an underrated worship leader over the years. Since making her career with duo Watermark (basically her and her husband Nathan Nockels formed the duo), Christy rose to prominence as a rising star amongst Passion Conferences and their music ministry. Over the years, Watermark (and later on Christy when the duo disbanded, and Christy ventured out to release new solo music) would offer up heartfelt melodies and emotive songs that were always highlights on every annual Passion album. Nowadays, Passion and their music releases aren’t the same as they used to be…and maybe that’s ok, maybe that’s too much change in one go, but from an objective standpoint; throughout every Passion album that has released over the past little while (for me, I feel from 2017’s Worthy of Your Name onward), artists like Christy Nockels, Charlie Hall, Matt Redman and Chris Tomlin have seemingly been passed over (intentionally or not, we don’t know) in favour of other Passion artists like Kristian Stanfill, Brett Younker, Melodie Malone and Sean Curran (formally of Bellarive fame). Regardless of whether Christy will ever be on a Passion album again, her music is still relevant and emotive now as it was when she first started.

Since starting her solo career, Christy has released album after album full of powerful songs for the church- 2009 showed us Life Light Up, one of my personal favourite worship albums of that year, with songs like ‘No Not One’ co-written with Brandon Heath, “Life Light Up”, “A Mighty Fortress” and the Brooke Fraser written “Hosanna” showcasing some of the highlights on such an album like this. In 2012 she unveiled to us another project in Into the Glorious with smash hits and favourites inclusive of “Everlifting”, “Sing Along”, “Waiting Here For You” and “Healing Is In Your Hands”. And while I myself haven’t really listened to fully her live album Let it Be Jesus, I know well that that 2015 album was also a standout of that year too. Christy also unveiled a cover of the Housefires (and subsequently Pat Barrett) hit, ‘Build My Life’ in 2017, while she has also unveiled 2 Christmas albums in The Thrill of Hope and The Thrill of Hope Renewed (2016 and 2019 respectively), a lullaby album in Be Held: Lullabies for the Beloved (2017), and most recently, her 2019 standout standalone single ‘In Every Way’. Now fast-forward to 2022, and she’s back at it again, with a double single Come Magnify (comprising of the songs ‘Home’ and the title track ‘Come Magnify’)- with both songs unveiled, from a yet-to-be-unveiled forthcoming worship project, tentatively slated for early 2023.

‘…This Friday we start the journey towards A NEW ALBUM that I can’t wait to tell you more about in the days and weeks to come! This week we’re releasing two songs, one of those is a song called “Come Magnify” which I started writing at the piano a few years ago as a way to repeat David’s invitation in Psalm 34:3 in my own heart, “Oh, magnify the Lord with me, and let us exalt his name together!” One of the most challenging aspects about the world as we know it is that our culture is set up where it’s far too easy for you and I to get in the habit of looking at and to each other in these days for inspiration and validation, maybe even for a quick, spiritual fix! It makes me wonder if you and I have forgotten how to daily aspire to the unseen, which the Scriptures clearly tell us is where we find what lasts! My hope is that you are deeply encouraged by the extended invitation of the Psalms in this song that essentially says, “Come, look up with me!” The truth is, looking at and to God first—everyday—is the only way to truly love each other, to address our differences and find, in His life, everything we need and even what unites you and me: The beauty of the cross, the fullness of His love and the His truth that sets us free! “Come Magnify” releases THIS Friday along with a song called “Home” that I cannot WAIT to tell you more about! Both songs will be available wherever you listen to music!…’

I’ve always admired the passion of Christy in her music, and that is nothing different with the new songs ‘Home’ and ‘Come Magnify’.  Honest and hopeful, emotive, and encouraging, Christy’s enthusiasm and passion amongst many female worship leaders is often unbridled and unprecedented. We are met with almost every emotion when it comes to hearing her vocals in these two songs as we see Christy deliver these two themes present in these songs with much intentionality and passion- ‘Come Magnify’ reminds us to always look towards Christ as the master and perfector of our faith, to magnify Him with our whole being because of what He has undertaken for us to be reconciled and united back to Himself. It’s a song that hopefully allows us to pursue Him first and foremost, fixing our gaze, focus and attention on Him instead of petty arguments and philosophical musings with each other that may not necessarily mean anything fruitful in the end. For when we focus our eyes on Jesus, everything else seemingly fades away, and nothing else should matter. ‘Home’ on the other hand, is a song that allows us listeners to become exciting about spending forever and eternity at home- in communion and fellowship with God Almighty. A poignant and heartfelt song that is slowly becoming one of my favourite worship songs of 2022 thus far, ‘Home’ invites us on a journey, so that we can thus realise that being in the presence of God Himself, is the home that we need, especially during such a time in the history of the world, where it looks as though things aren’t going to get better, period. We need a safe and secure place to call home, and this song invites us to call such a home, in Christ Jesus.

Co-written with Jason Ingram (like every other great worship song!), ‘Come Magnify’ the song, is a breath of fresh air (likewise with ‘Home’), compared to a lot of other worship melodies and songs to have been borne out of the last year and a half, and Christy the artist, was by far one of my favourite parts of Passion in albums gone by. With both these songs a must-listen, especially if you’ve appreciated Christy’s songs of the past (in particular, tracks like ‘Waiting Here For You’, ‘Healing is In Your Hands’, ‘No Not One’, ‘A Mighty Fortress’, ‘Let It Be Jesus’, ‘In Every Way’ and ‘Sing Along’, to name a few), or if you’ve enjoyed Passion albums of years gone by; Christy ought to be commended for such vulnerable songs as these, that are certain to convict and challenge whomever hears the track, myself included. The first couple of singles from a project to be unveiled in February 2023, well done Christy for such a poignant, emotive, heartfelt, and moving single. Looking forward to the release of the full-length album, in a few months.

‘…‘Come Magnify’ started out as a chorus that I would sing at the piano as a way to repeat David’s invitation in Psalm 34:3 in my own heart, ‘Oh, magnify the Lord with me, and let us exalt his name together’! My hope is that you are deeply encouraged by the extended invitation of the Psalms in this song that says, ‘Come, look up with me!’ The truth is, looking at and to God first—everyday—is the only way to truly love each other, to address our differences and find, in His life, everything we need and even what unites you and me: The beauty of the cross, the fullness of His love and the Truth that sets us free! …[‘Home’] was a song that opened the floodgates after what felt like a long, hard drought as a songwriter. It was written after a long season of enduring some pretty daunting physical ailments, as well as carrying the weight of how our world has drastically changed these past few years…If anyone loves me, he will keep my Word, and my Father will love him, and we will come to him and make our home with him [John 14:23]. How beautiful is that? That you and I not only get to be home with God in eternity, but we’re invited to come home to His heart in the here and now. I pray that this song has you going further up and farther in, home to your Father’s heart again!…’