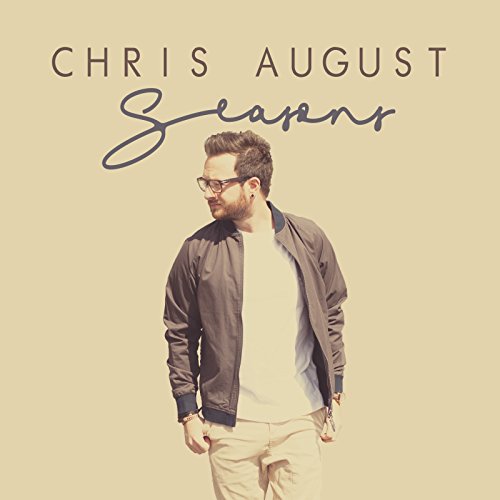 ‘…I love the journey and the seasons we go through in life. I felt like this release needed to be called Seasons because of where I am in my career, newly stepping out as an independent artist and excited to get this music out into the world. I’m in a different season now since my last release. I’ve gotten married, I’ve grown in my faith, and now I’m releasing music on my own for the first time in 10 years. I’ve worked hard to pour myself into all elements of it from the writing to producing, and it’s finally time to share with everyone. It’s my hope that these songs will encourage, inspire, and challenge people in the season of life they’re walking through now…’ Chris August has had a whirlwind career of late. Since being signed by Word Label Group in 2010 and releasing his debut album No Far Away that spawned hits like ‘7×70’ and ‘Starry Night’, Chris received the Best New Artist at the 2010/11 Dove Awards, as the world took to his soul pop singing style (as he had a similar musical undertone to that of either Shawn McDonald or Jimmy Needham, both of whom I reckon are terribly underrated, even now!). Over the years, Chris’s fans have amassed, as Chris himself unveiled to the world more music- from hits like “The Maker” and “Center of It”, to the popular radio version of “Unashamed of You” and the power ballad “Restore”.

Chris’s switch from initially being a mainstream artist to devoting his time within the CCM circle- and then again to be an independent artist after all this time, has paid off. With his new album Seasons being his first album/loooong EP to be released independently after departing from Word Label Group not too long ago; Chris takes us all back to the theme of there being seasons in our lives, and that God is there for each and every one of them! Releasing in early June, and being, for me, the surprise EP/album release of 2018 thus far; Chris’s new album is not one to shy away from if you are a fan of the genre that encompasses artists like Jimmy or Shawn, or newworldson. As this new album becomes one of Chris’s most musically diverse and unique, we see Chris’s enthusiasm about the production process behind the album, and how ‘…Seasons is unlike any other record I’ve done. I didn’t have a certain theme or sound in mind other than to make the music I love making. I poured my soul into every lyric and every piece of the music…’

As The Maker was a more worshipful sound, Seasons presents more of a soul-pop/acoustic flair similar to that of Unspoken, Shawn McDonald or Salvador, which I reckon is probably more akin to what Chris really wanted his music to be about in the first place. That’s not to say that The Maker was a bad album, far from it. It’s just that sometimes some music genres come a little easier to artists than other genres- and acoustic soul-pop is something I reckon Chris is well suited to. We can tell that Seasons was very fun for Chris to make, and it comes through a lot through his music and arrangements in this 8 track musical collection. And while I reckon the song-number is a tad too little (this ‘EP’ could’ve done with a few more songs, and it would’ve been a fairly solid album, and one of my favourites of 2018…instead it falls under the category of EP, albeit a ‘very’ long one!), the songs and flow of it nevertheless is something of a breath of fresh air- there hasn’t really been that much acoustic soul-pop this year alone, and Chris’s passion and enthusiasm show us the talent and passion that comes from hearing much of Chris’s music, Seasons inclusive. Fresh and unique, upbeat and celebratory, Seasons comes to no surprise that Chris has not lost any of his flair and zeal for creativity in music, something that can be seemingly lost today in the sea of radio friendly songs that follow a generic formula!

A forthcoming radio single in the next few months, first track on the EP ‘Nothing’s Beyond Broken’ is perhaps one of the musically and lyrically stronger songs on it, as Chris offers the theme of how nothing is beyond the repair of God, and that even the most broken things can be put back together- even better than before, by our Father in heaven. As Chris shares with us himself, ‘…In 2010 I wrote and released a song called “7×70” about coming from a broken home. It was a song about forgiveness and healing. After my dad heard it he told me that God can take something that’s broken and make it better than it was. I loved what he said so much that I would say it every night before I sang that song. I knew at some point I would take that idea and turn it into a new song. Nothing’s beyond broken…’ Let’s just say that this new song of Chris’s sort of feels like a 7×70 part 2, just more of an upbeat alternative. The title track ‘Seasons’ has a few cliché and confusing lyrics in how ‘…to know what’s hot, you gotta know what’s cold, and when it froze, had to let it go, now what I’ve got is not a season thing, cause time can pass and it won’t change…’, still, the heartfelt intentions are nevertheless there with Chris unveiling to us that this title track was actually written for…wait for it, his wife, even though upon first listen, I thought it was another ‘Jesus’ track. ‘Seasons’ though is a personal song for Chris, and despite a few lyrical cliché’s, the song itself can be a testament to those whose relationships, be it spouses, or another familial ones; are sturdy, strong and firm!

Throughout the rest of the EP, we have been blessed to hear a smorgasbord of musical styles and lyrical content, as Chris delves into issues deep to his heart. ‘Worry’, which starts off with an acoustic guitar and continues to beyond a blues-y track, shows to us a song about not worrying, and dives into Matthew 6, where Jesus was encouraging his disciples to cast their cares on Him, because as even He cares about the sparrows, He will surely care for us all the more. As Chris depicts, ‘…at the time, I was going through some big transitions in my life so stress and worry were at the forefront of my mind. I needed some time to remind me that God is in control and I wasn’t in this alone. It gave me the simple reminder that we know the ending to this story and no matter what season we are in, there is joy and peace in Him…’ ‘Lips’, a tad under 3 minutes, takes its musical influences from R&B legends like Stevie Wonder, Brian McKnight and Boyz II Men to name a few, and brings to the table some New Orleans R&B/blues flavour, something that isn’t done that much in CCM. Thematically, we are met with a declaration and proclamatory statement, that God’s name is on our lips, and that we will always declare of His goodness in our lives regardless of our circumstances.

‘Delivery’ brings the theme home with Chris making a stand, that there’s only one Word, one hope, one way to God (through Jesus), that there’s only one delivery that we can take to eternal life. While the rap seems a little odd for Chris himself to undertake (maybe someone like Manwell from Group 1 Crew would’ve been a good option to deliver the rap in the song!), the message of the track still remains, that Jesus is the one way for salvation. ‘Moonlight’, the most musically unique and diverse song on the EP, tries its hand at rock/metal, as Chris uses the influence of Beethoven’s ‘Moonlight Sonata’ to paint around this song and make it about how God is always there like the moonlight is around to shine in the darkest of nights; while ‘You and Me’ breaks it down musically to just the acoustic guitar and some Paul McCartney/Stevie Wonder vibes as the message of how God finds time for you and me, though He is the God of the universe, shines through. The EP then ends with ‘Everything’, a musically mellow track where we find Chris unveil his all to Christ, asking Him to take everything that is not of Himself, to part with things that aren’t going to point to Jesus, as Chris himself prays a prayer that we ourselves need to examine as well!

Releasing in June, and being the most surprising EP/album release of the year thus far, Chris’s latest effort is one to cherish, remember, savour and highlight as the songs on Seasons take on a whole different meaning when they’re placed against the backdrop of winter for the Southern Hemisphere and summer for the Northern Hemisphere. With Chris’s unique musical style that sets him apart from other CCM artists like Josh Wilson, Brandon Heath or Matthew West; Chris continues to wow fans and critics alike with his whimsical fun atmosphere, his serious moments of heart and hope, as well as songs that are just plain enjoyable and fun, with this album being no different. From the title track to songs like “Delivery”, “Worry”, “Nothing’s Beyond Broken” and “Moonlight”; this is a perfect gift for anyone who loves soul-pop, and enjoys music by similar style artists like Unspoken, Dara Maclean, Shawn McDonald or Jimmy Needham. Well done Chris for these 8 tracks that mould together genres of worship, pop, soul and a whole lot of fun in between. Can’t wait for the next album whenever it releases!

3 songs to listen to: Delivery, Nothing’s Beyond Broken, Worry