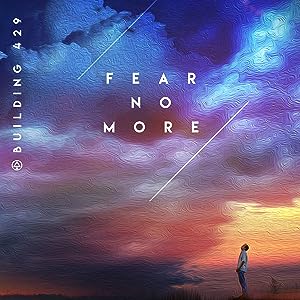 Building 429 has been one of my favourite bands within the last few years. Since the years in the early 2000s where they were an independent band, to when they were signed by major labels and released albums through INO Records, Word Label Group and Provident Label Group- that spawned radio hits like ‘Glory Defined’, ‘Always’, ‘End of Me’, ‘Fearless’, ‘You Carried Me’, ‘We Won’t Be Shaken’, ‘Where I Belong’, ‘Press On’, ‘Unashamed’ and ‘Ocean Deep’, to name a few; Building 429 have won the hearts of many of their fans since the beginning, providing inspirational and uplifiting songs throughout their entire career. Upon the heels of their most recent album Live the Journey that they unveiled to us all late last year, we see the band delivering another stellar song in ‘Fear No More’, this time released not under Provident Label Group (Live the Journey was released under that label!), but rather released under Building 429’s own label, Third Wave Music.

‘…we have been on quite a few labels through the years and there have been seasons where I thought there may be something I have to add from the opposite side of the equation, not just the creative artistic side… As I’ve gotten older, I’ve weathered a bunch of storms and been through some ups and downs. I’ve seen sickness. I’ve seen death. I’ve seen marriages dissolve. I’ve seen all those things so it allows me to look at songs from a completely different perspective and I think that’s probably the biggest thing, knowing the song better than I’ve known it before…’ It is within these quotes that I can see a great level of maturity from Jason, where he longs to be at the other side, helping other artists through and delivering a label that fosters relationships and nurtures talent in individuals, rather than churning through artists like bubble-gum (like a majority of labels do!). Humble, honest and hopeful, lead singer Jason Roy’s new venture into the business side of music, but also still going on leading the band from the front also, is something I reckon will allow him to gain a better perspective on a business that is often misunderstood and misrepresented. As Jason continues to outline, ‘…We’re in the third wave of our career. The first wave was me as an independent artist, trying to figure out what would work and what wouldn’t. Then the second wave was signing a big ol’ record deal with a big ol’ company where all your dreams seem to come true. That’s all I ever wanted in life and then coming to the end of it, and beginning to realize that there’s a real possibility that I could do this better and that I could do this in a way that is unique directly to me and unique to the artists that we sign — I believe that the third wave of my career is where I’m going to yield the greatest results…’

The song itself? Discussing about fear; and tapping into the feeling we as humans want to push aside so bad. Featuring the backing vocals of Brooke DeLearey of LOVECOLLIDE, this now independent Building 429 continues to wow and impact, inspire and maybe at times challenge with this new song that allows us to contemplate whether we ourselves fear in our lives more often than we should. ‘Fear No More’ is an anthem, and though released independently, Building 429’s track record is enough for maybe, just maybe, the powers at be that choose song selections for WOW Hits to place ‘Fear No More’ on WOW Hits 2020? With a few more months until WOW Hits 2020 track listing is announced, we shall wait and see. And so, what shall we do now between this new song and whatever new EP/album release is coming next? Well, listen to this song on repeat, of course. Or just shuffle on all of B429’s songs when we play them on Spotify. And thus now, we end this review with a quote from the band themselves in a recent devotional interview they undertook with NewReleaseToday.com about the song and what their hopes for it are! Well done Jason and the rest of Building 429 for such an empowering song, hoping and praying that ‘Fear No More’ continues to impact us all in the upcoming months ahead!

Every step of “Fear No More” has been an exercise of saying, “I don’t know where this is going to end, but I’m not going to fear in it.” I wanted to write a song that spoke to the reality that many times, the things we wouldn’t ever choose actually lead us directly into the most beautiful, life-altering moments where the reality of God’s presence is beyond a doubt. Whatever challenge you may be facing in this time, I hope “Fear No More” reminds you that God is with you in the trial; that while every great book has moments of doubt, the hero is always with us, and the final chapter is yet to be written. The biggest reason we fall prey to fear is that we believe the biggest lie that Satan tells us: that we’re alone. When you realize how precious you are to the Lord, that he stands beside you and takes your suffering on Himself through Jesus Christ; it’ll give you a different perspective on the struggles that you face.