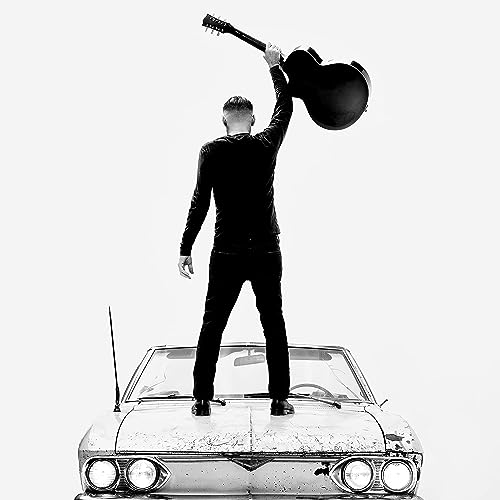 That’s pretty much exactly how I’m feeling [very positive]… But again, it wasn’t by design, it’s just how I was feeling. And it was pretty difficult in the beginning for all of us musicians because we couldn’t do what we do best, which is go on tour. We couldn’t go on the road. All of the spontaneity was taken away.

So Happy It Hurts is really about the sentiment of spontaneity and freedom. It’s great. I’m actually here in Portugal right now. We’re starting on Saturday night, playing to a big crowd here and then another one on Sunday and believe me, I’m going to be filming it to show the rest of the world that people can get back together again.

The only thing that’s different on this record compared to previous albums is I couldn’t perform it with my band. I had to find another way. And so what I was doing was recording all the instruments myself, one by one, and trying to create the feeling of a band — and in the meantime, perhaps this is one of the reasons the record is quite joyous. I had such a good time doing it. It was really fun to try and live my lifelong dream of being a drummer and then structuring each piece of the record one-by-one until it sounded like a song or it sounded like an album.

It’s 2022… and COVID and its effects are still hanging around, after being present in the global community for about 2 years. The Russia-Ukraine war is the most devastating and the most harrowing since the Iraq war in 2003; while last week’s ruling on Roe V Wade will have major implications and ripple effects for all of us in the coming weeks, months, and years to come. We are living in unprecedented times when the definition of a woman is rubbery and also when trans women in sports is a hot topic. Depending on your views, the world is in a good place, or it isn’t. you can be in one of two ideological and political camps; and sometimes you may lose friendships or familial relationships because of differing views. And thus, it is now in these turbulent times, where we need music more than ever. Music, or I guess in essence God through any type of music He chooses, can lift the spirits, can calm our soul and can sooth and ease our pain and suffering. Music can make us think about our life and can make us ponder the deep questions; while music can also provide us a means to escape.

CCM, worship, pop, rock, country, and every other genre in between can all, at one point or another, strive to accomplish these tasks of making each of our days all the brighter. We’ve reviewed plenty of uplifting albums throughout this year and previous… but one such album that I’ve stumbled across lately that has warmed my soul- and that I would like to briefly dive into right now, is Bryan Adams’ new rock album So Happy It Hurts. I’m not that well-versed in anything from Bryan Adams all that much. Jon blogged about Bryan way back in 2019. And so, if you want to read about Bryan and his music, and his biggest hits like “Summer of 69”, “Everything I Do (I Do It For You)”, “Please Forgive Me”, “Heaven”, “Here I Am” and “All For One” to name a few; you can read that blog at your own pace. Thus, the question demands to be asked: for someone who isn’t much of an expert of this artist or genre (pure rock album!); how does So Happy It Hurts (Bryan’s 15th studio album!) rank amongst albums released in 2022? And my short answer is… it ranks pretty, pretty, high. The long answer? Read on and find out!

The one thing I really miss in the last couple of years is singing onstage every night. It’s extremely cathartic to be a singer; it’s not only cathartic, but there’s the physical release, having to sing for two hours a night, no matter how crap I was feeling before a show. After a show, I’m always feeling quite good because the adrenaline starts to move everything around and you’re filling up your lungs and you’re going for it.

What was that thing they used to have years ago where they had sort of shouting therapy? Screaming therapy or something? It’s not quite like that, but I think there is something to it.

Opening the track-list is the vibrant and energetic title track. It is the heart and soul of the record, in my opinion. And as Bryan emphatically relays to us that he feels happy and optimistic and positive in the face of adversity; we are challenged and encouraged to look on the bright side of life and to look for the positives in every dark circumstance. The saying ‘every cloud has a silver lining’ is apparent and evident in this song, and as Bryan beams with happiness and cheer in this rock melody; we can’t help but sing along with equal passion, zeal, and fervour for life as well! Following on from the sunny opener, is the equally powerful and exquisite “Never Gonna Rain”. Another positive track; this melody reminds us that how we feel can often be a choice. Can we choose to be happy or sad? Probably not. But Bryan reminds us that despite how we feel, it’s our choice how we act on those feelings- and sometimes we ought to ‘…smile like I never had a heartache, laugh like I never had a care, gonna take my cup and fill it up, like it’s never gonna rain, never gonna rain again…’.

The rest of the album is just one song after another of overwhelming cheerfulness, joyfulness, and a reminder that we can be happy with our friends and family despite the issues surrounding us. “You Lift Me Up” is a romantic and inspiring ode to Bryan’s partner Alicia Grimaldi, and a song that we all can proclaim to all of our partners as well, as he relays that ‘…you are my strength, reason for being, heart and soul, our kind of love is special, it’s worth more than gold…’; while the 2 minute country-esque melody “I’ve Been Looking For You” speaks about wanting to be in the presence of your significant other as well as the people you hold dear and close. “Always Have, Always Will” is a guitar prominent mid-tempo ballad, whereby Bryan eloquently and earnestly recounts his devotion and love and dedication for his partner Alicia, singing out that ‘…I can always depend on you, you give me trust, that is true, I loved you yesterday, I love you still…’; while the powerful rocker “On The Road” is an album highlight- as Bryan fervently relays that he can’t wait to tour again and be on the road touring and performing for fans.

“Kick Ass”, a satirical and tongue-in-cheek song about God creating rock music, brings a smile to my face, and isn’t meant to be theologically correct, but is just meant to be a track that is for laughs and for fun. The song is a highlight on a cheerful and heart-warming album; and complete with a ‘sermon’ from John Cleese… what’s not to love about this quirky, eccentric 5-minute melody? “I Ain’t Worth S*** Without You”, one of the rare expletive-filled tracks from Bryan, is a raw, no-holds-barred, and unfiltered rock tune about not being complete or whole without your partner in your life; while the romantic and dreamy poppy “Let’s Do This” speaks about two people entering into a relationship and being spontaneous in everything they do- it’s a song about taking a risk and a leap of faith.

“Just Like Me, Just Like You”, a confessional, vulnerable and honest admission of fault, has Bryan prayerfully acknowledging his vices and his shortcomings to his partner, declaring that he made a mess of things. This melody is a track that asks the partner’s forgiveness, and is a track in which Bryan mans up and takes responsibility for his own actions. “Just About Gone”, a resentful and hurtful melody, speaks about Bryan through the persona speaking about leaving an almost-ex for unknown reasons. It’s a song full of emotion and heartache- as Bryan tries to figure out whether he wants to fight for the relationship or not; while So Happy It Hurts ends with the emotional, compelling and moving ballad “These Are The Moments That Make Up My Life”- a melody whereby Bryan sings about his family and that they are what makes his life worthwhile.

Jim is super talented. We put together simple ideas and the next thing you know it’s a song. The very first time we sat together, we made music and we made original music and that’s what we do. And it’s called chemistry.

I want to mention two other things: one is that Jim and I wrote this musical called Pretty Woman in 2018 and I just recorded my own versions of the 16 songs. They’re all going to come out in the first week of March. I’ve also done eight new masters of my original big hits.

So I’ve done a Taylor Swift, so to speak, and they’re going to come out on the first week of March as well.

With a number of the romantic songs on this album quite possibly being able to be interpreted as worship songs to Jesus- even if that wasn’t Bryan’s intention; Bryan Adams’ latest album is a reinvigorating breath of fresh air. An album full of positive and happy moments and a collection of songs that are musically and lyrically extremely cohesive; So Happy It Hurts is an album that demands to be listened to; no matter if you love rock music or not. With Bryan already releasing an album full of re-recorded classic songs (which will be reviewed later on this year); this album is a must for fans of artists like Sting, Bon Jovi, Rod Stewart, and Bruce Springsteen. Well done Bryan; I can’t wait to hear what is next from you in the future!

You know, this is a strange time to put out an upbeat record, but I always believe that music and musicians are there lift your spirit. That’s the responsibility of a musician. If I think back to the other albums — I released ‘Waking Up The Neighbours’ in the middle of the Iraq War. And then whether it’s the umpteen other wars that have happened and all the albums since then, it’s all about music. It’s about having that getaway from the things in life that are more difficult.

3 songs to listen to: Never Gonna Rain, On The Road, Kick Ass