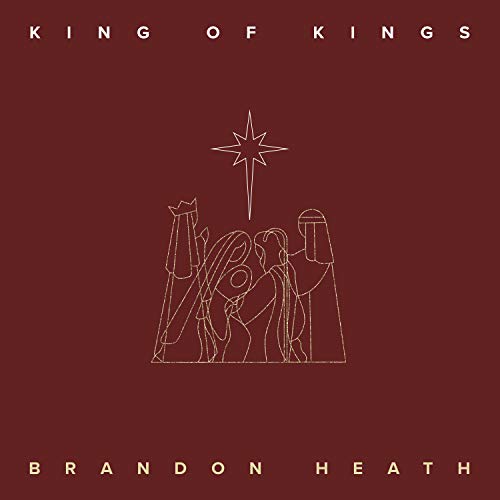 Out of the success of his most recent album Faith, Hope, Love Repeat, which spawned hit songs like ‘Whole Heart’ and the title track, Brandon Heath has continued to assert his prominence within the CCM with the unveiling of his brand new Christmas song ‘King of Kings’, his first offering of anything Christmas-like since anything from his 2013 album Christmas is Here. Bursting onto the scene with his chart-topping radio hit ‘I’m Not Who I Was’, released in 2006, that catalogued his own journey to faith, as we’re reminded that who we were before isn’t who we are right now; we as listeners have continued to be blessed and hear Brandon deliver song after song full of vibrancy, poignancy and enthusiasm, from songs like ‘Give Me Your Eyes’, ‘Your Love’, ‘The Light in Me’ and ‘Love Never Fails’, to ‘Wait and See’, ‘No Turning Back’, ‘Behold Our God’, and ‘Love Does’, to name a few. His new song ‘King of Kings’ (which is not on a label but rather released through an independent label ‘forbidden island’) is also no exception, inviting us all to partake in such a season like Christmas, arguably one of the biggest (aside from Easter) celebrations in the calendar year that emphasises Jesus and the central part of the Christian faith.

Since parting with his label, sometime between the release of his most recent album till now, Brandon has been busy, touring and being open to the impact songs like ‘Whole Heart’ and ‘Faith, Hope, Love Repeat’ have on fans of his concerts. So for Brandon to unexpectedly release ‘King of Kings’, first exclusively to Spotify and then made wide-available on other streaming and downloadable platforms, is, in fact, from left field. Nevertheless, the song itself, though released and maybe even recorded independently, sounds anything but, as we are invited to, what is in a nutshell, a worship song. Lyrically, we can’t get anything better than a very theologically sound song during this Christmastime- ‘…come find the peace that passes understanding, come see the reason all the angels sing, come all ye hopeless and all ye faithful, lyin’ in a manger is the King of Kings…’ Brandon has delivered a song that gives us hope and comfort, as we whom are singing are given hope that Christianity, at its essence, is a faith that is reliant on grace rather than works, of coming as we are rather than cleaning up our act before we approach our Father. ‘King of Kings’, full of piano pop presence that has been the staple amongst many other Christmas melodies, is a song that is as memorable and anthemic, as it is needed in society. Brandon does a great job in allowing such a song to deliver the right words to minister to people’s hearts, and for me personally, gives us a song that has been one of my favourite originally written Christmas songs I’ve heard since for KING AND COUNTRY’s ‘Baby Boy’, Matthew West’s ‘A Christmas to Believe In’ and Casting Crowns’ ‘Somewhere In Your Silent Night’.

So there you have it, ‘King of Kings’, a song that literally came to the world unexpected but nevertheless had a lot of poignancy and heart that this song has become my favourite Christmas song of 2018 thus far. So what is next for Brandon in terms of new music in the future? We don’t know. Whether this Christmas song is the first of many to be released independently, or whether this is a one-off, Brandon regardless has and always will release music for the soul, songs that challenge but also be fun-filled along the way. And so what are we waiting for? Listen to ‘King of Kings’, again and again and again, and understand that on a day like Christmas Day, we are called to be still and admire the fact that God incarnate came down to earth to dwell and experience human life, so as to relate to us when we ourselves are in our plight. He suffered and died so we don’t have to. And that is a reason to celebrate Christmas (and Easter) with reckless abandon and hope unbridled. Well done Brandon for ‘King of Kings’, can’t wait for the new album to unveil to us, whenever that may be!