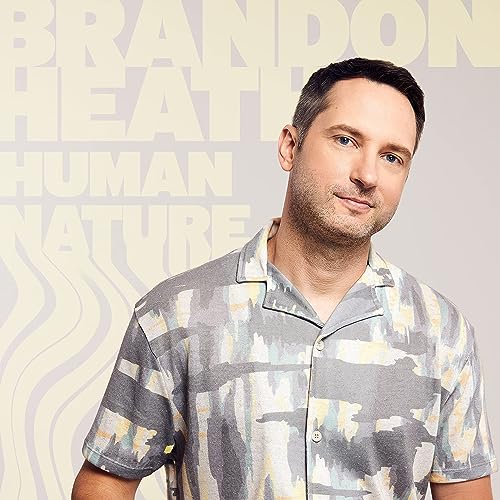 Out of the success of his recent full-length album Faith, Hope, Love Repeat, which spawned hit songs like ‘Whole Heart’ and the title track, Brandon Heath has continued to assert his prominence within the CCM with the unveiling of a song ‘Faces on a Train’ in 2020, the first song he unveiled that was undertaken independently since the parting of ways between Brandon and Provident Label Group not that long after 2017’s Faith, Hope, Love, Repeat. Bursting onto the scene with his chart-topping radio hit ‘I’m Not Who I Was’, released in 2006, that catalogued his own journey to faith, as we’re reminded that who we were before isn’t who we are right now; we as listeners have continued to be blessed and hear Brandon deliver song after song full of vibrancy, poignancy and enthusiasm, from songs like ‘Give Me Your Eyes’, ‘Your Love’, ‘The Light in Me’ and ‘Love Never Fails’, to ‘Wait and See’, ‘No Turning Back’, ‘Behold Our God’, and ‘Love Does’, to name a few. ‘Faces on a Train’ in 2020 was reviewed here on the site, and as we fast-forward to July 2021, we see Brandon once again moving from independent to signed- after a stint releasing songs without a label, Brandon has once again affiliated himself with a CCM label- this time, Centricity Music. Releasing his first song on Centricity just this last week, ‘Human Nature’ invites us to partake in this notion and understanding that we are more alike as people as we think we are, and that the things that seemingly divide, shouldn’t be our focus- because ultimately at the end of the day, when Jesus the Saviour of the World, collides with our human nature and our tendencies to live our own way, then healing, restoration and unity can take place- our differences just means that we’re all on this journey of life, and that we’re all work-in-progresses. Brandon’s been busy since Faith, Hope, Love, Repeat, so for Brandon to unexpectedly release ‘Human Nature’ is, in fact, from left field. Nevertheless, the song itself is something we all need to hear, especially in a time where the happenings of this world, may lead us down this pattern of human nature that maybe we’re as fond to be a part of as we think we are.

‘…I feel like I am doing what I was made to do when I am writing a song. There’s nothing that makes me feel more alive and connected with myself and with God than when I’m writing a song…’ Inspired by the 2018 documentary Three Identical Strangers, Brandon wrote and recorded the song ‘Human Nature’ with its central idea being underpinned by this notion and belief that we as humans were created for each other- ‘…[In the documentary] these triplets were separated at birth—and I don’t want to give away the documentary—but the three of them always felt this burden and they couldn’t describe it. They just didn’t realize they were looking for each other. They didn’t realize that they belong[ed] to each other and they were missing each other. It sheds light on the human condition, and how we’re supposed to be connected. We’re not supposed to be separated…’ It is in this understanding of being connected in life that Brandon himself relayed that to his own understanding for Christianity as a whole. Humans ought to be connected to each other, but also connected to God, and in spite of all of what we undertake in life, and the ‘human condition’ we are in, God still wants that connection anyway, regardless of whether we feel ‘worthy’ of it, or as Brandon himself says it, ‘…God sees our human nature, I believe, and it doesn’t scare Him. I believe that we were made by Him, [and] He sees our wars, He sees our addictions, He sees our brokenness, our loneliness, our fear, and I don’t feel it bewilders Him…’ A song that employs a fair amount of trumpets and a strong piano undertone, Brandon’s musical exploration in ‘Human Condition’ is exciting enough to expect unique and different things for whatever Brandon has coming up, be it at the end of the year, or even early 2022.

So, there you have it, ‘Human Nature’, a song that literally came to the world unexpected but nevertheless had a lot of poignancy and heart that this song is certain to become one of the most unique Brandon Heath songs he’s done in his career thus far. So, what is next for Brandon in terms of new music in the future? We don’t know. Whether this new song is a precursor to a new album in the future, or whether this song is just as single (and a new album is coming, without ‘Human Nature’ included), Brandon regardless has and always will release music for the soul, songs that challenge but also be fun filled along the way. ‘Human Nature’ reminds us that irrespective of what ‘human nature’ things we’re dealing with, the Lord still wants to commune with us any which way, and even if we’re always going to struggle with whatever ‘human nature’ things that we’ve labelled in our lives (or others have labelled in our lives, on our behalf), Christ and the message of Christianity is for people like you and me, and people who have lots of ‘human nature’ issues, and people who may not have as much. Whatever the case, Brandon’s new song ought to be listened to at least once, and maybe, just maybe, we can be intrigued to listen to what I believe, is one of CCM’s most underrated (alongside others like Josh Wilson, Jason Gray and Andrew Peterson).  Well done Brandon for ‘Human Condition’, can’t wait for the new album to unveil to us, whenever that may be!