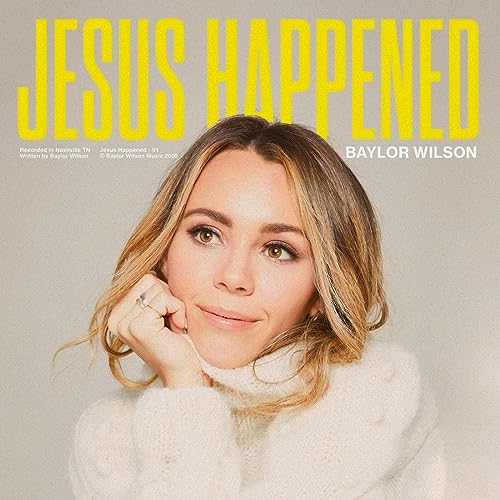 I walked into that car shop and they were worshipping and singing. It was the first time I felt free to really worship. I felt God’s tangible presence fall over me for the first time. I was weeping and weeping, realizing I didn’t want to live the way I was living anymore. I didn’t want to fill my life with things like partying and drinking and dating the wrong people. I felt a profound peace that night. Later, I found out it was because I met the Prince of Peace.

I’d have co-writes with country writers and I’d be testifying to these people who used to be worship leaders. They didn’t know what to think! But my mind had been renewed. I’d had supernatural brain surgery and it was all I wanted to talk about.

After my encounter with Jesus, people would see me and say, ‘What happened to you?’ I figured out the easiest way to explain it was that Jesus happened!

Have you ever had an encounter so intense, so pivotal, that somehow you knew that it was from God, and that He was trying to grab your attention in any way possible? For new and up and coming artist Baylor Wilson, recently signed to Fair Trade Services; her life has been a testament to Jesus. From her starring in the reality show Survivor in 2014, and then pursuing a country music career later on, it wasn’t until 2017 where a ‘chance’ encounter with the Holy Spirit, with Jesus, led Baylor to a radical change, a heart transformation, and a life overflowing with God’s love. And after coming to Fair Trade Services and partnering with them for all future releases; the result is a debut single that is poppy, infectious and energetic, but also speak the truth of God and His faithfulness. Essentially a testimony in song type of track; Baylor’s single is cheesy and cliché in every sense of the word… but it is still such a joy to listen to and encouraging to hear the name of Jesus being proclaimed so openly and proudly.

Though “Jesus Happened” is lyrically and musically simple (the lyrics in the chorus ‘…Jesus happened, in a blink of an eye every part of my life was changed, Jesus happened, like a thief in the night, He started taking the lies away, and all my sin was forgiven the moment I met His grace, that’s when I started living, and all that my heart can say is Jesus happened…’ aren’t that inventive!), there’s a sense of vulnerability, sincerity, joy, happiness and openness that I have not heard in a debut single since Lauren Daigle’s “How Can It Be” in 2015. That’s a long time… and more than reason enough to check out “Jesus Happened”. Baylor may not be popular with this song nor influential. But she’s singing for Jesus and making His name famous. That’s what counts most of all, right? So what are you waiting for? Baylor Wilson is an artist you all need to check out. Pronto! You’ll thank me later!