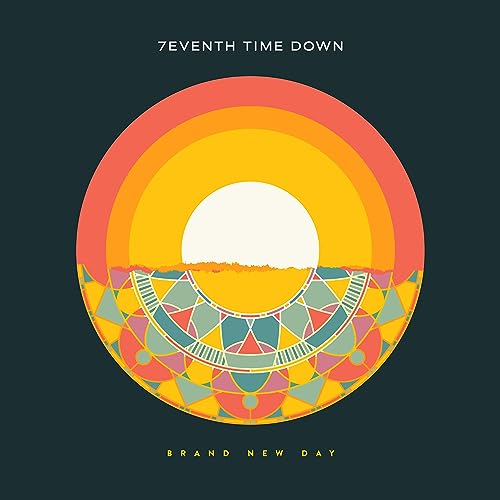 Releasing their third album God Is On The Move in 2015 via BEC Recordings, 7eventh Time Down, the pop/rock quartet from Kentucky, with musical similarities to Building 429, Kutless and Seventh Day Slumber, delivered 11 songs of rich lyrical poignancy, brutal honesty and raw emotion, while also tackling broader issues prevalent to society today. These guys wear their heart on their sleeve, and after being completely overcome and challenged by their sophomore album Just Say Jesus in 2013, I personally found that friends Mikey, Eric, Cliff and Austin picked up right where they left off, which was definitely a good thing! With God Is On The Move mainly comprising of the theme of God working in our lives all the time even when we can’t see the immediate effects; the BEC Recordings album was, and still is, a must listen for any listener who loves pop/rock music, or even worship music as well. Though some melodies and lyrics were slightly cliché, there’s no denying the band’s heart for Jesus, as we did and still can immerse ourselves and delve deep into 40 minutes of guitar led pop/rock goodness.

However…that was then. Now it’s three and a half years later. Essentially, it is really a Brand New Day (the name of the new album!), however despite a few reinvograting and refreshing anthems, the bulk of these somewhat inspiring tracks pale in comparison to the group’s last two albums. “I Have Decided” was released as the lead single last August- and with plenty of repetition and cliched lyrics…well, need I say more? In my honest opinion, I reckon that Brand New Day is very underwhelming- sad to say, yet you all can form your own opinion, as I lay out the reasons as to why I’ve come to my conclusion.

First of all, album opener and lead single “I Have Decided” just has plain lazy writing. Let me say as a precursor, that I am not bashing 7eventh Time Down. Not at all. Their previous full-length albums are pretty good but if you want to pinpoint one thing- it’s just that when you have been reviewing for as long as I have, you tend to pick up on things a lot, especially whether a song is lyrically engaging or not. While you would say a lyrically creative song would be something written by Andrew Peterson; “I Have Decided” falls into the category of unengaging. Lazy writing, repetitive lyrics that we’ve all heard before, an overuse of electronics- you name it, and “I Have Decided” has it. This track didn’t really make me feel confident about the band’s next new album, and now that I have had a good listen to Brand New Day, I can say that my reservations back then were indeed valid. Because the rest of the tracks are slightly better than “I Have Decided”, but only just.

“Let Me Tell You” is an attempt at EDM, yet the band fail terribly, as the music is something that is so unlike them. Even though the lyrics are somewhat compelling, as we are met with a testimony type song that should bring people closer to Jesus; Mikey’s electronic voice especially in the refrain after the chorus amongst the repetition isn’t that engaging. “The 99” though is a solid CCM-esque radio friendly rock single, as Mikey and the band vividly describe the parable of the lost sheep, and aptly reiterate that Jesus would do anything to find us and draw us closer and closer to Himself- even leave the other 99 sheep; while songs like “Trust” and “Make It Count” speak about their respective themes (trusting in God, and making sure our life right now counts towards the eternal prize of Jesus) quite simplistically. Repetition is abound especially in these two tracks as both songs are basically Mikey trying to pull off an EDM track and a Rock/hip-hop track respectively- and not even succeeding part of the way. The title track is interesting musically though, as Mikey and co. deftly uses EDM married with rock to their advantage, providing us with a Skillet/Hawk Nelson type track that is a bright point amongst a track list of indifferent melodies, while the lyrics of the song leave much to be desired. Comparing God to one of the great painters of all time like Rembrandt or Picasso is great, but this comparison comes literally out of nowhere.

Speaking of indifferent melodies, the misses keep coming. “Can You” is a radio friendly guitar led melody that is essentially a prayer, as Mikey asks God to come and save him from the stresses of everyday life; yet the abrupt nature of phrasing of ‘can you’ creates another type of song that reeks of entitlement. No pleases or thank you’s can be a bit pedantic, yet the tone is totally affected in this track because of the lack of niceties. I know it’s not the band’s intention for the song to come off as sounding elitist, but that’s just how I perceived the song as- using God as a genie in a bottle. “Help Me” is a little better, however the rocker falls flat for some reason; while another winner in a sea of disappointments is “Eyes On You”, where the band create a joyous and infectious dance number similar to something that Manic Drive would record- and is lyrically quite sound as well, with the band relaying that all we need to do to survive and thrive in this life is to keep our eyes on Jesus. “Basic”, a pseudo-rap/rock/spoken word track, ends a painful album with limited areas of positivity, as the album ender is basic unfortunately, for lack of a better word. In this song, Mikey channels his inner Manafest and/or KJ-52, yet it doesn’t come off as strong, and the ‘rap’ indeed is cringeworthy. Brand New Day might have taken 3 and a half years to record, but you wouldn’t know it by listening to these tracks- and I don’t mean it as a compliment.

In 2015, 7eventh Time Down crafted an album loaded with worshipful moments, as well as thoughtful melodies about the human condition and our place in this world as a Christian. But more than three years on; Brand New Day isn’t that ‘thoughtful album’ we all hoped for and wanted and that is a shame- as the band is super talented, but the talents are wasted here. Arguably one of my favourite artists on BEC Recordings currently (alongside Kutless, All Things New, David Dunn, Matty Mullins and Stephen Christian), these men from Kentucky have not delivered enough in Brand New Day to warrant at least a sustained listen. Musically, they’re all over the place, with only a few tracks worth repeat listens. But the fact that these guys still have proven track records is reason enough for us to keep our ears peeled for maybe the album which could be better from them. So, as we wait on what God has for 7eventh Time Down next, what do you think we should do? Revisit God Is On The Move? Or just binge-listen other artists’ albums? How about both?