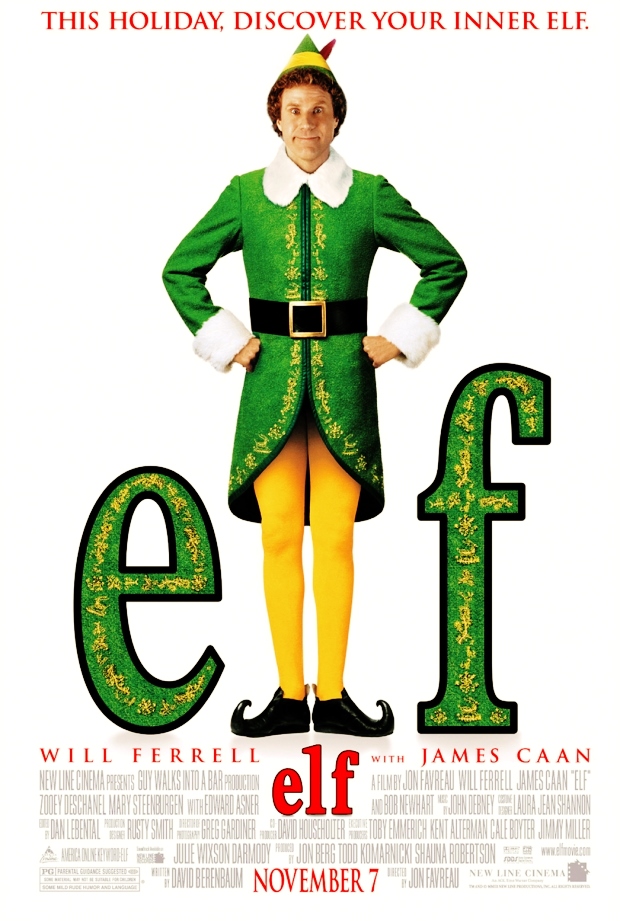 What’s the film about?: A human boy from an orphanage crawls into Santa’s sack one Christmas, and travels to the North Pole. The head elf adopts the boy, calling him Buddy; but when Buddy learns that he’s a human one day, he travels back down to Earth to find his biological parents and his place in society. A Christmas classic, I myself have only seen the film a few times, but the joy and Christmas spirit is to the max here… that it’s be a crime for any of you all not to watch this film.

Initial thoughts: A silly, but heartwarming movie- essentially about a man who wants to find his place. I think we all can relate to that on some level, can’t we? Never mind that we know that Santa isn’t real- this film does still speak to us and speaks to us about the importance of family and the knowledge that we have people in or corner that will always defend us no matter what.

Reason to watch: It’s a Christmas classic, it’s fun for the whole family, it’s one of Will Ferrell’s few tolerable films, it’s a film that is serious but also light at the same time, and a film with a happy ending. Remind me why you don’t want to watch this?

Reason to skip: Because you’re no a fan of Will Ferrell, or you religiously don’t watch movies about Santa. But if you believe that God speaks through anything that He wants to- then you’ll have no problem watching this movie about Santa, but ultimately a movie that celebrates the notion of spending time with the ones you love during the holidays.

Does it have heart?: Immensely so, as Will’s character Buddy is like a big kid with a wild imagination, and a naivety and innocence not seen in the world today- and that’s pretty admirable and heart-warming to see.

Does it have a Christmas-y atmosphere?: With the very notion of this film being about elves and Santa- this has a Christmas atmosphere to the max. And as Buddy eagerly and probably with too much gusto, tried to persuade his dad and brother and stepmother to believe in the impossible (Santa), we are reminded, that sometimes as believers in Jesus, that’s how we feel when trying to speak to those around us who don’t believe. But this film shows us that sometimes the impossible things are true and the impossible things do add value in our lives.

Uniqueness?: As a ‘Santa’ movie, maybe The Santa Clause is more iconic and popular. But this comes a close second, and is pretty unique. Fred Claus and Noelle might have jumped on the bandwagon pf Santa movies, but Elf and The Santa Clause reign supreme!

Scene Stealer: Peter Dinklage as a dwarf, and the look on his face when Buddy insults him and calls him an elf. The interaction between Peter and Will in that scene si painful to watch, but in the bets possible way!

Christmas message: The message on Jesus is non-existent but the message of Santa is permeated all throughout.

Closing thoughts: If you want to watch a fun-filled, laid back film about finding yourself and where you fit in, then Elf is for you. If you want a film about Jesus, then you’ll be disappointed. But given that this film is about more than just Santa, and is about how you can find purpose and meaning with the ones you love and the people around you; then I’d say watch Elf is a good idea- because non matter what you believe you will gain something positive out of it.

Yes/no; why/why not?: If you want a Christmas movie for nostalgia, then Elf is the movie for you. Nothing more needs to be said.