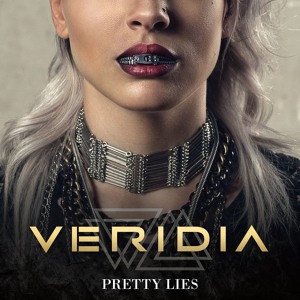 Releasing their breakthrough and critically acclaimed EP Inseparable in 2014 via Word Records, and building upon the craze that is female fronted bands in the CCM industry (bands like Shine Bright Baby, The Letter Black, Icon For Hire, Fireflight, Barlowgirl, ZOEgirl, Addison Road, Point of Grace and 1 Girl Nation have shown us listeners and critics that girls can rock out just as much as guys!); VERIDIA, comprised of Deena Jakoub (vocals), Brandon Brown (guitar), Kyle Levy (drums) and Trevor Hinesley (guitar), have unleashed their follow-up EP recently, titled Pretty Lies, on the back of their successful appearance at Winter Jam this year. As far as sophomore albums go, you may think that Pretty Lies may be only ‘ok’, given that many albums go through the ‘sophomore slump’, but this is definitely not the case here. In fact, VERIDIA’s newest release is personally stronger than anything they’ve released before. With genres employed that are quite unique, these 4 songs and 1 remix features stirring, striking and brilliant vocals, as good as I’ve heard in years!

Vocally sounding similar to Dawn Michelle of Fireflight and Sarah Anthony of The Letter Black; VERIDIA, whose name is rooted in the belief of being true to oneself and never compromising on beliefs; offer us a few gems and treasures, with infectious beats and heart tugging lyrics…but as soon as we become immersed in the album, it ends. That’s the only downside, however on the plus side, emotions are sure to run high after hearing these anthems about the human condition, and questions will be asked about deep and meaningful issues, as we are swept away in a top notch produced EP quickly rising to be one of my favourites in 2015, behind Nichole Nordeman and Zealand Worship’s offerings.

Immediately when you listen to these melodies, there’s a sense of heightened musical production about them, with electronics, keys and stellar synth work all forming the backbone of the EP musically. The title track, a no-holds-barred call out or pointing the finger at the lies of this world, has Deena fervently and eloquently reminding us that the way we live our life is impacted greatly by how we view ourselves. Too many times in this day and age do we hear comments, about ourselves, the people around us, and about life in general, that just aren’t true. But because they are sugarcoated in superfluous words, we tend to believe it because it sounds true. But lies are lies, and the band ardently remind us of this fact, that ‘…I’m calling out these pretty, pretty lies, we were meant to be perfectly imperfect, such a beautiful mess…’. Though the band don’t really provide us with assurance here, questions are posed, as we think about how we define our self-worth, and that alone is reason enough to listen to this song over and over until the notion that ‘we are not worthless’, sinks in. Oh, and Matty Mullins from Memphis May Fire, singing with Deena is a plus also! Though the remix at the end of the track list of the title track, is too busy for my taste, although it may grow on me…

The energetic guitar led rocker “Crazy In a Good Way”, the EP opener, complete with inspiring synth and Deena’s strong and captivating vocals, is a prayer of gratitude, of how God changes us when He enters our life, and reveals Himself and His love to us. As Deena honestly reiterates that ‘…it’s about to get crazy, crazy, crazy in a good way…oh, I love the way you wrecked my life, look into these eyes, I’m crazy, crazy, crazy in a good way…’, we are reminded that no one else could compare to the way God loves us, and the feeling when we know that God is for us and is in our corner every step of the way. Though our lives may not be easy while being a Christian, it is indeed crazy in a good way, when we step out in faith and see God do miracles. What other kind of life would you want to live? Well done VERIDIA for these rockers that are some of the most honest and real melodies of 2015! The final two songs (yep, final…these guys should record a full length album soon!) delve a little deeper into prevalent issues in society today, and these guys execute the deliveries of the songs very well.

“At The End Of The World”, a high octane synth led mid-tempo rock ballad type of track explores the tension of going through life with no support, and speaks about the importance of friends, family and every other relationship you could think of. Using metaphors and imagery of a dystopia, VERIDIA reminds us that we all need people around us, as ‘…at the end of the world, when the sun can’t see the city, at the end of the world, If your arms are wrapped around me, I feel invincible, I’ll overcome it all…’. The song could also be about God as well, and about how He is everything we need, even during the literal apocalypse, but that’s the beauty of songs like these with double meanings, is that people of many different beliefs can appreciate the significance and meaning of such tracks. The last song, “Say A Prayer”, is the EP’s only ballad, and is by far the pinnacle of the mini-album, with Deena’s majestic vocals carrying this anthem, as we are reminded that we shouldn’t be inward looking at our own personal problems, but in fact should be looking outwards to the much more pressing issues around the world that are much more dire and important than ours. As Deena pleads with listeners to ‘…say a prayer, a song to lift the lonely heart, all around the world, a spark, lighting up the night…’, we are encouraged and challenged at the same time, to be the hands and feet of those who can’t speak up and to show the love of Jesus to those who need it the most. Thematically similar to “For Those Who Can’t Speak” by Tenth Avenue North and “Hands And Feet” by Audio Adrenaline; VERIDIA ends the EP on a stellar note that has me pressing repeat on iTunes again and again!

In my opinion, VERIDIA is one of the best female fronted bands I’ve heard, and I’ve heard plenty. Drawing plenty of comparisons to The Letter Black, Barlowgirl and Fireflight, musically, vocally and lyrically; Deena and her friends have called us to action, to be a light in a dark and fallen world, and to realise that our support for someone can make the difference between life and death. With each song asking questions and probing; encouraging us to be better as we live for God; there’s something musically on this EP for everyone, and Deena’s vocals are exquisite! Pretty Lies is pretty awesome; Word Records have definitely signed a keeper! Full length album next year? I’ll be eagerly waiting! So check the album out, you won’t be disappointed! If you loved Inseparable, they you will definitely love Pretty Lies!

3 songs to listen to: Crazy In A Good Way, At The End Of The World, Say a Prayer