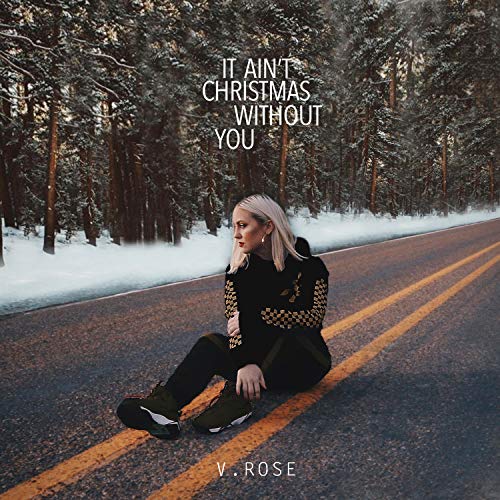 V. Rose– It Ain’t Christmas Without You (Amazon mp3/iTunes)

Previously releasing her self-titled debut and sophomore album Forever After in 2011 and 2014 respectively, as well as a deluxe edition of her debut album in 2013; CCM/pop/hip-hop vocalist V. Rose signed to Inpop Records in 2015, and released Young Dangerous Heart in 2016, of which you can read our review right here. An artist who is authentic and passionate, as well as baring her soul and her everything in her lyrics, what has drawn me to V’s songs is honesty and raw emotion. Even now, as V has moved away from Inpop Records (my gut feel is that Inpop is now defunct…), and is now an independent artist once again, she has always worn her heart on her sleeve, and has always shown us her immense love for Jesus. Though right now a full length follow-up album to Young Dangerous Heart hasn’t released yet, it’s time that V deliver us something to tie us over to such a release- and that she has, with the musically unique and creative Christmas EP It Ain’t Christmas Without You.

Granted, this isn’t your normal Christmas album. There are no carols, or at least carols sung traditionally; nor are there holiday Christmas themed melodies. Sure there are songs about Jesus here, but given that V is a rap artist first and foremost, it makes sense that these songs are EDM and rap infused. The result is somewhat of a mish-mash of genres, that at times work well and at times are distracting, as V nonetheless worships Jesus here, and gives Him to glory, as she thanks Him for being born. “For Us”, a spoken word 1 minute piece contains a catchy refrain of “It’s The Most Wonderful Time of the Year”, as the chill and relaxed toe-tapper relays to us that Jesus Christ is worthy to be praised because He has been born for us, while “It Is The Night” essentially lets us know that Christmas is also known as the night that Jesus was born, hence our thankfulness and gratitude needs to be on display because He has saved our souls. However the midpoint of the EP is the underwhelming title track, and not even Young Noah can save this hodgepodge of a mess, as even though V emphatically and earnestly declares that Christmas just isn’t the same if Jesus never came to Earth (There probably wouldn’t even be a Christmas!); there’s something about the track that feels off. Thankfully, the final two songs “Not So Silent Night” and “Joy To The World” more than make up for this mishap, as the former is the only ‘structured’ song on the album, and reminds us beautifully that even though Christmas was and is a holy and silent night because Jesus was born, we can be loud and rowdy about it in joy and celebration; while the latter is an original song (with the same name as the well-known carol!) that has V praising Jesus for who He is, showing us her infectious and contagious joy and cheer as well.

According to some critics and listeners, changing labels a while ago may have meant that V. Rose needed to change her sound- one of the aspects that made her unique, as she encapsulated pop, CCM, rap, dance, and almost everything else in between (but not metal!). But Young Dangerous Heart has only proved the contrary- that V has only expanded her sound, and drawn in a whole lot more listeners. Which is great news as V. Rose continues to bring her vibrant and unique brand of music to the world. It seems as though her Christmas EP harkens back to the old days with her more EDM sound, yet this may not mean that V is done with CCM- we will know soon once the next studio album releases. So I guess until then, we shouldn’t really comment about what genre V should record- it is completely up to here. What we can do instead, is to marvel at what an exquisite singer and songwriter V is, and let us sit back and listen to what I believe is one of the most unique Christmas projects of the year.

3 songs to listen to: It Is The Night, No So Silent Night, Joy To The World