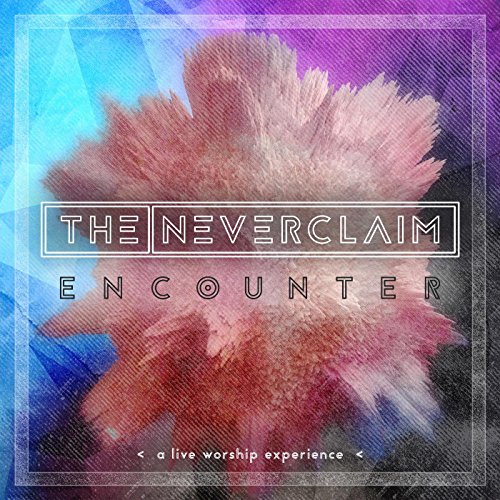 “…Every story of hope in a desperate situation starts with an encounter with Jesus. He alone holds the power to break off chains of fear, shame, anxiety and depression. He alone can redefine who we truly were made to be. He can take all the brokenness from our past and turn it into something beautiful…” Musically similar to artists such as needtobreathe, Newsong and Third Day; Radiate Music veteran band The Neverclaim have had an exponential path to success over the past few years. Having signed to Ian Eskelin’s independent record label (alongside artists such as About A Mile and Pearl City Worship), the band are set to release a live worship album Encounter this coming week, on the heels of the highly praised and acclaimed The Joy last year, and once again, these young men of God, who also previously recorded an album on Essential Records, have proven that they are the real deal- with their heart for Jesus brimming over with excess and highlighting their immense talent! With Jeremiah Carlson leading the vocals and acoustic guitar, and the rest of the band consisting of Mitchell, Chuck, and Beji (on guitars/keys, bass, and drums respectively); the group of friends from Portland, Oregon signed to Essential Records through Mac Powell from Third Day, introducing the band to the label.

Though that relationship with Provident Label Group didn’t really pan out, what Ian has subsequently crafted through his independent label is nothing short of remarkable- this new live album (releasing on the same day as albums from Planetshakers and Jonathan & Melissa Helser- and also able to be streamed in full on New Release Today!) stands tall amongst other standout worship albums this year. With the band name inspired by how the band do not want to claim God’s glory as their own, and instead want to give Him the praise, honour and recognition in everything; lyrically these 10 tracks (some brand new songs, some covers, and some hits from The Joy!) are some of the most honest that I’ve heard from a worship album this year, alongside albums from Hannah Kerr, Meredith Andrews and Phil Wickham. The Neverclaim are indeed a band to watch out for- they will be around for a very long time to come!

With three of the ten offerings present here being already previously released from The Joy, we are treated to a few of the band’s biggest hits on Radiate Music, sung in a more unbridled and spontaneous free worship setting, which is a welcome change as we see these songs in a different light. Opening with the synth heavy and keys prominent mid-tempo ballad “Our God Wins”, we are presented with a poignant and heart-warming melody that is as life giving as it is view changing. With Jeremiah ardently proclaiming that ‘…I may be pulled back like a bow and arrow, within the tension that’s where hope begins, He is the victory, even the enemy knows how the story ends, our God wins…’, we are provided with the knowledge that Jesus has already won, so we can live in that freedom, knowledge and security as well- what a brilliant and resounding theme to be introduced to so early in the intimate and inspiring worship set. Later on we are treated to the live version of “Rules And Reigns”, which is a subdued yet nonetheless still stirring and powerful, acoustic guitar led ballad. More intimate, reserved and reflective, and a straight up worship song; Jeremiah and co. proclaim in one of my favourite songs of the band, that God rules and he reigns over all, vividly describing instances where His sovereignty is displayed and evident. With The Neverclaim having created a solid track that beautifully captures and depicts God’s sovereignty and that He reigns above all; the final representative from The Joy is “Through Christ”. With Jeremiah and his friends expressing and highlighting that we live in freedom in Christ and that ‘…through Christ our King, the victory is sure, against all things His Kingdom will endure, no dark, no depth is deeper than His love, we will overcome…’, it is the theme of living in Christ and being free, that was littered amongst almost every track on The Joy and also flowing onto Encounter. The theme of Jesus being with us and that we are free in Him because of His love and sacrifice for us, is one that cannot be reminded to us often enough, well done guys for these stellar interpretations of some of my favourite songs of yours!

If a live album only contains ‘best-of’ songs and no previously unreleased and brand new material, then I’d be scratching my head for sure. Thankfully, four of these tracks from The Neverclaim in Encounter are in fact new tracks, with each new melody imparting to us relevant and important qualities about God that we can rely and depend on in the Christian walk. Aptly titled “Testimony” is a groovy, pulsating drum led and electric guitar led mid-tempo ballad, as Jeremiah reminds us that we all are ‘…a testimony, a testimony, for Your glory, for Your glory, we have overcome by the blood of The Son and by our testimony…’. It is in our words when we are to others what God has done in our lives, that others’ lives are changed by God, so a song like this highlights how important it is to have a personal relationship with our Lord and Saviour- and not just live vicariously through other peoples’ walk with Jesus.

As The Neverclaim stresses in “Testimony” that we all need to have our own personal relationship with Jesus, the title track is the next new track featured. Standing tall at just over 7 minutes, the CCM and radio friendly light electric guitar led compelling worship anthem is an earnest plea to God, crying for revival, as Jeremiah and co. long for a personal encounter with God. As Jeremiah declares ‘…encounter, encounter, we long for an encounter, heaven crash on us, wreck us with Your love…’ numerous times (the chorus does seem slightly repetitive- the only nitpick!), we are glimpsed into one of the simplest yet effective worship melodies of the year thus far; a song we can sing on our own in reflective worship or on a Sunday morning with a congregation. “Where You Are” (nope, not a cover of Hillsong Young & Free’s smash hit from Youth Revival!) and “Man Of Sorrows” (again, not the Hillsong Worship cover!) are the remaining original melodies. Also featured on Pearl City Worship’s debut album, “Where You Are” is a piano centred simple prayer and worship piece, that could easily be sung in corporate and personal worship, as Jeremiah and the band passionately reiterate that they want to see the presence of God fall down and invade the country and the world, that we want to and long to be where Jesus is, as we declare alongside the band to God ‘….let your presence fall Holy Spirit come and fill this place God we want it all Father we delight in your embrace…’; while the rousing and guitar led mid-tempo modern day twist on the age-old hymn “Man Of Sorrows” with an added chorus, is thoroughly enjoyable with the band worshipping with passion and intensity I haven’t heard from in a while. Crying out to God ‘…hallelujah, what a saviour, hallelujah, Jesus has set us free, hallelujah, what a saviour, forever we sign, Jesus our victory…’, we are encouraged to sing along with the band, proclaiming that Jesus is our victory and the One we can rely on in times of trouble.

The remainder of the three melodies are the covers “Breathe” (Michael W Smith), “Touch The Sky” (Hilllsong UNITED) and “How Great Thou Art” (Hymn), and each are recorded with aplomb and professionalism. With the band making each one of these songs their own (special mention goes to “Breathe”, which the band absolutely nail!), the inclusion of these three covers on a dynamic and musical diverse album is a smart choice, even though I may have wanted more of their past hits to be included on this live record as well (with the track list stretching beyond 10 tracks…). Nit pickings aside, as soon as I hear the final notes of “How Great Thou Art”, there is only one thing to do in my opinion, and that’s press the repeat button again- these songs are so, so good, in my opinion, as we are edified and built up with these Holy Spirit anointed words and God breathed melodies!

“…Christ alone has been my strength, guide and the only one who could speak the reality of my true identity in Him. I am His child and through Him every battle I have ever faced and will ever face is already won in Him…” While it may be true that The Neverclaim seem to be a conglomerate or mishmash of Third Day, Newsong and needtobreathe, they also have forged their own identity with their country southern musical roots mixed in with their worshipful heart, present on many acoustic worship ballads, catchy pop offerings, and emphatic rousing and epic anthems. Jeremiah, Mitchell, Chuck, and Beji have played out of their skins on these 10 tracks, and though these mighty men of God haven’t received any Dove Award Nominations this year, they thoroughly deserve to next year (here’s hoping and praying that Encounter garners an award nomination for live album of the year…)! It’s going to be interesting seeing these young men live for Jesus and evolve musically by the time the next album comes around, and hopefully they can successfully help Ian launch a respected and popular new label. I definitely am anticipating their next studio effort, and will watch closely at how God works in their lives. Yes, this year is possibly one of the best in terms of combinations of albums releasing, but Encounter from The Neverclaim is one such album that you won’t want to miss!

3 songs to listen to: Encounter, Where You Are, Breathe