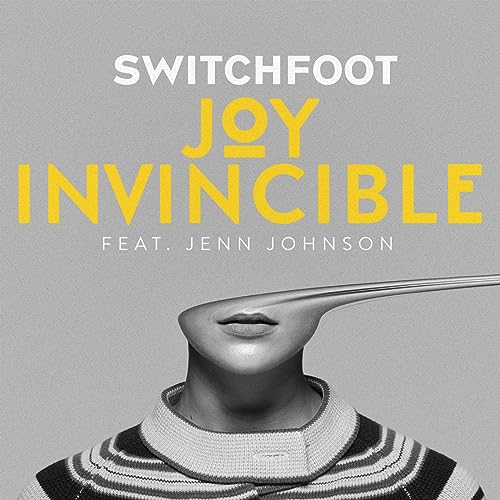 Switchfoot need no introduction. The San Diego rock quintet comprising of lead singer Jon Foreman, guitarist Tim Foreman, second guitarist Drew Shirley, drummer Chad Butler and keyboardist Jerome Fontamillas, have been making music since the 90’s- with the band being one of my favourites of all time, and one of the most influential of all time. Having one foot in the door of each the Christian and mainstream media with great skill and immense courage; these guys aren’t afraid to speak the truth, even when they’re the only ones speaking it. That’s certainly the case in their newest single “JOY INVINCIBLE”.

If you guys reckon you’ve heard “JOY INVINCIBLE” before, it’s because you have. You most definitely have. Cause the track was present on Switchfoot’s 2019 album NATIVE TONGUE, and way back then I predicted that the CCM and radio friendly nature of the track would garner it being recoginised as a radio single. I was right, yet I didn’t think that they’d try to source a guest vocalist for another re-recording. However in these crazy times of quarantine, being reminded of joy is necessary- and being reminded from another perspective is definitely quite welcome! While on the surface we are presented with a fun and bubbly CCM radio friendly jam, indeed a deeper listen results in something more heartbreaking yet hopeful. This song is probably one of the most meaningful in NATIVE TONGUE, and probably currently as well, as we are encouraged to keep singing ‘hallelujah’ and being joyful, even in the midst of suffering- something that I reckon keyboardist Jerome definitely held onto during his cancer operation, as evidenced in this interview: “Joy Invincible” became that [song]. We didn’t know that it was about Jerome when we wrote and recorded it, but after we wrote and recorded it, Jerome was like “That’s my song!” And we just said, “Yeah dude, that’s totally your song. ‘Joy Invincible.’” Basically, hallelujah nevertheless. No matter what the circumstances are with his health and cancer, he was like “I still have joy underneath, and I have hope.” That’s the one that became his anthem, and our anthem for him. So while we revisit this gem of a track, and then mine for more gold throughout Switchfoot’s discography; let us sit back and allow God to minister to our lives, and read about the story behind this particular version from Jenn below! Well done guys for a compelling new single- I can’t wait to hear what’s in store for you all next!

What a wild ride we’ve been on these last few weeks. Our day to day lives have been flipped completely upside down and what the future or a “new normal” looks like is different and still unclear for all of us. In these times of confusion, it’s of utmost importance to remember there is peace and joy to be found even when in the eye of the storm. ‘JOY INVINCIBLE’ is a song about a joy that transcends pain. It was written as a response to one of the most difficult seasons of my life -praying for a family member from a hospital waiting room. Sometimes a song gains meaning as time progresses. This song means even more to me now, in this season of emergency. Having Jenn join us to sing this song feels appropriate: two very different voices from two very different backgrounds singing one song in harmony. I hope that this song can bring peace, hope, and even joy in this season of pain.