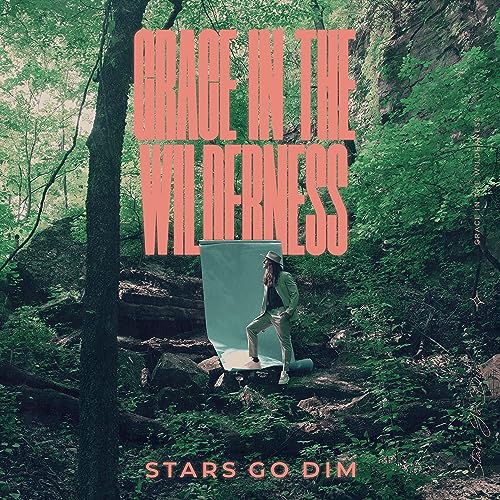 Stars Go Dim burst on the scene in 2015. For me at least. Sure, the band was making music long before then, in fact, the band itself was birthed way back in 2008, as a side project that a couple of members of Pillar decided to undertake. Around 15 years later, Stars Go Dim is much more than just a ‘side project’. A full-time ministry helmed by singer-songwriter Chris Cleveland (Chris is the only regular ‘band member’), Stars Go Dim has in fact been under the radar for all these years, that is until the mid-2010s. Releasing Love Gone Mad and Between Here and Now back in 2008 and 2011 respectively, it was their signing to Word Entertainment at the beginning of 2015 that led to quite possibly one of the biggest label debuts of any new artist of that particular year. Their self titled debut album released in October 2015 digitally and January 2016 physically, when then led to many sought-after radio singles like ‘You are Loved’, ‘Walking Like Giants’, their not-that-popular-yet-still-popular-in-Australia ‘Stars’ as well as their retake on hymn ‘Doxology’. The band’s self titled label debut is in fact one of my favourites of 2015, and one of the most cohesive albums of 2015, period. Fast forwarding to 2019, and the band delivered Better, a project that comprised of Better EP (an EP that released a year prior), alongside a few other singles released in the first few months of 2019. While it is not known whether it is just Chris these days, or whether it’s the full band, Stars Go Dim nevertheless gave to us a powerhouse of an album in Better– songs that stood out to me from this project were inclusive of ‘Heaven On Earth’, ‘Pieces’, ‘I Look to You’, ‘You Know Me Better’, as well as the album ender ‘Autobiography (When I Found You)’. We as a site even reviewed the album here. And so, a few years after that, Chris Cleveland a.k.a. Stars Go Dim is back at it again, this time with another album release- Grace in the Wilderness.

Let me just start off by saying that this ‘review’ isn’t really a review. I mean…by the end of it all, I’m sure it won’t even be a mere few paragraphs. Stars Go Dim the artist (or is it a band), is objectively a great band, within the confines of CCM and what CCM as a whole has to offer- for over their career, there’s been chart-topping songs like ‘You are Loved’, ‘Walking Like Giants’, ‘Stars’, ‘Doxology’, ‘You Know Me Better’, ‘I Look to You’, ‘Heaven on Earth’ and ‘Pieces’, to name a few. Chris Cleveland has a very powerful voice, that can, on its best day, rival every other male voice within CCM. But herein lies the problem. CCM as a genre, against the wider, lyrical and musical landscape; is unfortunately playing catch-up. Which brings me to the Stars Go Dim of today, and the album Grace in the Wilderness as a whole. Not that this is a diss against Chris, nor is it an attack on CCM…but in all honesty, Chris’s sound currently is already seen in mainstream…and they are called OneRepublic. Yep. Chris’s new album is full of heavy OneRepublic influence (even if Chris himself didn’t intend for the album to sound exactly like Ryan Tedder and co., except the album actually has), and that may or may not necessarily be a bad thing. But from where I’m standing, Stars Go Dim isn’t necessarily the most ‘inventive’ CCM band at the moment, and just because they had an explosive debut way back in 2015, doesn’t mean that 7 years later, they’re just as good. Or that they’re good.

Chris has tried his hardest, I’m sure of that. But unfortunately, like it or not, CCM isn’t necessarily ‘popular’ right now. Unless you are artists like for KING & COUNTRY, Lauren Daigle, Maverick City Music, or dare I say it, Ye (formally known as Kanye West). Gone are the days of the 1990s and 2000s where CCM was dominant and was actually a good ‘genre’ to be immersed into. Sure, we still have our staple artists of CCM across the years that are still impacting music and culture today, artists like Jeremy Camp, Skillet, TobyMac, Steven Curtis Chapman, Chris Tomlin, Rebecca St. James, Newsboys, MercyMe, Casting Crowns, needtobreathe, Michael W. Smith, Lecrae, Kirk Franklin, Jars of Clay, Sanctus Real, Switchfoot and Third Day; but let’s face reality. Grace in the Wilderness isn’t an album that’s really memorable. In fact, unfortunately; it’s pretty unmemorable. CCM as of now isn’t what it used to be. Just like every other music genre there is. Maybe it’s because I’m in my thirties and I’m starting to realise that music made now, be it CCM or otherwise, isn’t necessarily catered to my demographic.

Or maybe it’s because Stars Go Dim have evolved their sound too much that they are catering for a generation of people 10 years below me, and therefore have to modify their sound. Whatever the case, if the sound of current CCM isn’t sounding like Young & Free in any way possible, or if it’s not worshipful a la Bethel or Jesus Culture…well, you know the rest, right? Sure, there are artists that seemingly buck though the trends year after year and release CCM albums that are actually good (Phil Wickham, Crowder, Natalie Grant, for KING & COUNTRY, needtobreathe, Casting Crowns), but as of now, that’s neither here nor there, and it’s definitely few and far between.

Sure, I did enjoy ‘Yes He Does’, somewhat (there’s even a review of that single, here), but in all honesty, I enjoyed other albums, CCM and mainstream, a whole lot more (2022 albums from artists like The Shires, Hailey Whitters, Casting Crowns, Phil Wickham, Anne Wilson, Tenille Townes, Maren Morris, Kiefer Sutherland, Mandy Harvey, Rebecca St. James, even Passion, Ben Rector, Skillet and Love & the Outcome). And sadly (or fortunately, whichever way you look at it), Stars Go Dim doesn’t fit that category, or any category, if I’m honest. And I’m sure Chris has poured his heart out on this release. There’re songs like ‘Yes He Does’, ‘This is Love’ and ‘Live Like That’ that make this album listening experience not a disaster. But there’s not much more saving grace for this album other than that. Most of the songs are around the three minute mark (yes, literally) and by the time the album ends, I seem to have forgotten track #1 (and that’s not a good thing, indeed).

It’s unfortunately lazy writing to the max (‘…give me something to trust in, give me hope that I know is true, that’s what Your love can do, that’s what Your love can do, patch me up when I’m broken, shape my heart, make me look like You, that’s what Your love can do, that’s what Your love can do…’ [That’s What Your Love Can Do], ‘…something happens when you give yourself away, something happens when you take a step of faith, that’s the way that He designed it, designed it, got to lose your lifе to find it, to find it…’ [Give Yourself Away] ‘…ooh-ooh, Your mercy’s undefeated, ooh-ooh, it’s healing and redeeming, beauty from ashes, You make all things new, ooh-ooh, nothing is wasted by You…’ [Wasted]) and not even Chris’s charm and enthusiastic passion can save this project. I mean, I appreciate all the themes present here in this new album, even if some are recycled from songs in the past (‘Wasted’ thematically reminds me of Jason Gray’s ‘Nothing is Wasted’, ‘Thank God’ is thematically like Gabby Barrett’s ‘Thank God’, while ‘Satisfied’ by About a Mile is miles better than this song by Stars Go Dim (no pun intended). I love Chris as an artist. I love Stars Go Dim (album) and Better…but there’s no saving Grace in the Wilderness. Maybe Chris can bounce back in the future for another well-thought out follow-up to this unfortunately forgettable album? I’m definitely hoping and praying…a lot. Till then (a big if), I’ll keep Stars Go Dim (the album) on repeat. But that could be a long time yet.

3 songs to listen to: Yes He Does, This is Love, Live Like That