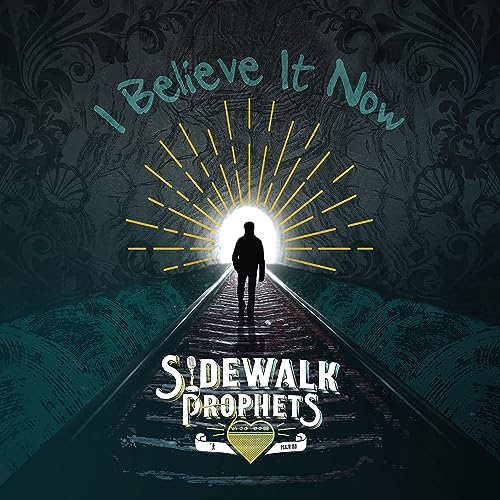 Having previously unveiled their much anticipated sophomore album Live Like That in 2012; Sidewalk Prophets, fronted by Dave Frey, released their highly anticipated third studio project Something Different in 2015 (which you can read the review here!). With the music and themes being pretty much similar to what we expected on their previous albums; there was indeed something different overall about the album, definitely in a good way! Live Like That held a special place in my heart when it released- as a picture of myself was one of 300 that were chosen by the band to be included on the album cover, reflecting the theme of the album of living like Christ, and the 12 songs present on the album were quite impacting and captivating also. But Something Different also stood out to me, mostly due to the band’s musical and creative risks they take and pull off with great ease and professionalism. Fast forward 4 more years, and these guys from Nashville had quite a lot to live up to lyrically and musically. 4 years was more than enough time to create a quality album- so for me the bar was raised quite high for Dave and co., when I heard about the impending release of lead single “Smile”. Originally popping up on my Release Radar on Spotify, I initially thought that this track would be a bit of a let-down. It’s a tad under 3 minutes, and the cover art is way cheesy.

Yet with this new release, Dave and co. have created a gem of track- one that is catchy as well as relevant (read my review here!). In 2020, the new album The Things That Got Us Here released. Scheduled to release in May 2020, but then pushed back to July because of COVID-19, Jon reviewed the album, and spoke about how the band created a solid effort, while not that spectacular. And I tend to agree with Jon. The Things That Got Us Here is indeed ok. But it’s only ok. There are high points and there are low points, and personally I enjoyed Live Like That and Something Different much more. However, I reckon the time has come for me to revisit The Things That Got Us Here. Probably not every track… but at least the song “I Believe It Now”. And that’s because the latest EP I Believe It Now (Alternate Versions) has released this past week.

“I Believe It Now” (the original track, included on this EP as track #3) features lead singer Dave Frey mixing in together pop and spoken word and rap. Normally I’d cringe at songs having a mish-mash of genres, but surprisingly, this track works. The song itself lyrically reminds us all that often at times, we can be blinded and ignorant as to what God has in store for us, because all we see is this life from a three dimensional point of view. Yet God sees in way bigger ways that we can even imagine; and our own point of views are clouded by our own circumstances and experiences we have had in our lives. What this song imparts to us is that there comes at a point in our lives- a revelation and a realisation, that how we’ve grown as people can be testament to the faithfulness and promises of God, despite the hardships we have faced. In fact, the hardships have played a part in shaping us who we are, and as Dave eloquently cries out ‘…oh, my God, I remember when I cried, shook my fists up at the sky, I wondered why You felt so far from me, oh, God, it was in my deepest pain that I heard You call my name, I heard You say that You were right there with me…’, we are met with the promise that Jesus will be right beside us, always til the end of time. However, while this song is quite inspiring and powerful on its own; an EP of 4 other alternate versions is… a tad overkill in my opinion. As we are treated to a single version of “I Believe It Now”, as well as a live version at the Ryan, an orchestral version and an instrumental version, we are presented with a solid EP in and of itself. However I can’t help but wonder if these versions would’ve been much more impactful on a potential deluxe edition of the latest album, or a brand new EP with other rarities, B-sides and new tracks. Having an EP of 5 versions of the same song… will probably get swept under the rug. That’s the reality of people’s attention spans. But this song is powerful and moving nonetheless.

The more I listen and perform ‘I Believe It Now,’ the more moved by it I am. Faith is hard sometimes, but God is bigger than our doubts. He pursues us through our unbelief. The truth is our doubt proves that our faith is small, but the God we serve will never abandon the ones He loves. He’s going to show up in ways that we can’t even fathom.

On the back of their successful radio friendly third album which garnered them numerous Dove Award nominations, Sidewalk Prophets and unveiled to us probably their most CCM song in “Smile” a song fit for the radio; yet a song still needed and very much relevant in today’s society whereby people are looking all glum at their own trials and tribulations. The Things That Got Us Here followed, and now we are presented with the latest single “I Believe It Now”. Though some would say that the band is playing it safe and not pushing the envelope musically or lyrically by releasing yet another pop song; what I think is that Sidewalk Prophets have found their niche market, their style of music they feel that God is wanting them to pursue. And though this particular song may not resonate with you right now; I guarantee you that giving “I Believe It Now” a second chance will be way worth it. A great track as we await whatever comes next; well done guys, you deserve all the praise!