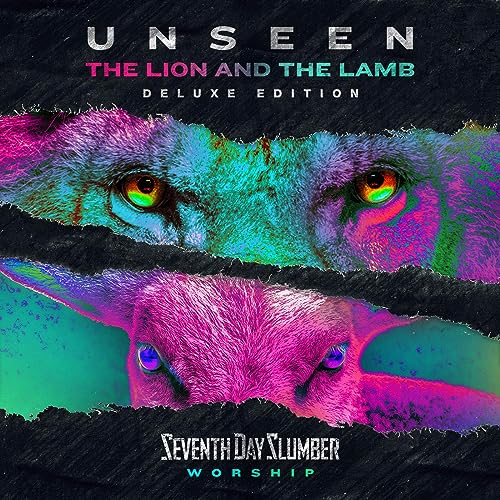 Seventh Day Slumber have always been a mixed bag for me. I’ve enjoyed songs like ‘Caroline’ and the hard-rock anthems the band have given to us over the years, alongside their 2009 classic worship album Take Everything. But ever since they have decided to create worship music covers using their trademark traditional rock atmosphere, it’s always been hit-and-miss for me. Since unveiling to us earlier this year, an EP titled Unseen: The Lion; the band once again unveiled to us Unseen: The Lamb. Both album reviews can be seen here and here respectively, and now in 2021, Seventh Day Slumber has bundled both EP’s together to create a worship album titled Unseen: The Lion & The Lamb– featuring worship cover songs like ‘Waymaker’, ‘Reckless Love’, ‘Run to the Father’, and ‘See a Victory’, to name a few, alongside original songs like ‘Unseen’, ‘Branches’ and ‘Eternity’…and while the album has a lot of heart and good intent, the execution when it comes to delivering these rock covers of these already-great songs, seems to be a little lack-luster to me. Though I have thoroughly admired the band and their heart for ministry- I’ve even enjoyed albums in the past like Take Everything, Once Upon a Shattered Life, Love & Worship and The Anthem of Angels; what I’ve seen as a result of their latest effort, is a set of songs that are lacking something. And maybe the album as a whole wasn’t as fulfilling as much as it can. And maybe that’s ok.

What I will say is this- to some people, Seventh Day Slumber is their favourite band, and these guys can do no wrong. Maybe people’s lives have been changed by this band, and I commend Joseph Rojas and the guys on such feats, if that were the case. Yet, for me, this new album of 12 songs, seems to be a little bit heavier on the guitars than even I myself may have liked. The original recordings of these cover songs are good- ‘What a Beautiful Name’ and ‘Run to the Father’ are some of my favourite worship songs over the last few years, ‘Reckless Love’ is one of my favourite worship songs ever, ‘Oceans’ is the song that led me to be excited by the music of UNITED, and ‘Waymaker’ is one of my favourite worship songs of late. Even here on this album, amongst all the electric guitars, the cover of ‘See a Victory’ is comparable, all things considered. But for me, I’ve never really been much of a fan of worship songs covered relentlessly and without fail, year after year after year, but every artist you can possibly think of.

And I know it can seem blunt and even uncharacteristic of me to say this, but it just seems on face value that this band is capitalising on these songs and are just recording them because…well, just to say they’ve done a cover of famous worship songs. As much as I want to believe that there’s heart, poignancy and emotion behind any of these songs, it seems a little difficult when half the time you’re trying to drown out the electric guitars so as to enjoy the song yourself rather than being lost in the instruments yourself, and not even enjoying it at all. Even the three original songs, ‘Unseen’, ‘Eterinty’ and ‘Branches’, all don’t seem to be as memorable when placed up against ‘What a Beautiful Name’, ‘Reckless Love’ and ‘Waymaker’- and unfortunately by the end of the album, I kinda forgot about how these original songs actually went. Maybe that’s saying something, maybe not. But maybe, just maybe, I’m not the target audience for this album, as I thought I was!

As I’ve said in the reviews of both Unseen: The Lion EP and Unseen: The Lamb EP; this band is 10/10 for effort and heart (as evidenced in countless of other albums previously). But here on this release, there seems to be a lot of it lacking. For me I’d just check out the original recordings of these songs- especially songs like ‘What a Beautiful Name’, ‘See a Victory’, ‘Run to the Father’, ‘Waymaker’ and ‘Reckless Love’; great songs that have impacted a generation and stand tall, out of any other worship song in the 2010s decade. Nevertheless, this is an album if you enjoy a lot of Seventh Day Slumber songs as well as worship songs…and that’s about it. Even people who love a lot of corporate worship songs, may or may not get into this, because of the heavy instrumentation that seems to take away and discount from the overall worshipful experience. Alas, this album has indeed released, and maybe, in the heat of the moment, I’m being a little too harsh on the band. Regardless, this album didn’t click for me, neither did their two EP’s prior to this.

Maybe I can get into these songs later on, but if you’re looking for a lot of originality in these covers, then Seventh Day Slumber isn’t it- they’re too electric-gutiar driven and sound very formulaic- verse, chorus, verse, bridge, no room for a little bit of flexibility. But maybe you’ll hear this album and be impacted by it all…good on you, then. But even if the band are covering some of my favourite songs of all time, I’d still be hesitant. Then again, I do miss the mixture of rock, light pop and acoustic presence on their 2009 album Take Everything. Now that is how to do a worship album. Maybe Take Everything Part 2 can be released soon? Or just listen to Take Everything and other cover worship songs, just for your sanity I reckon. Or just listen to these songs still; but turn your volume down a little. Whichever one is the easiest for you…you’ll thank me later. I guess…kudos to the band for creating these worship covers, for people to enjoy…it’s just that I realised through listening to this album, that I’m not one of these people? Regardless, Joseph Rojas and co. have a tried formula that works for their fans, and that’s ok. Whatever the case, the album was ok, but not ground breaking…but who am I to know, check out this album at least once, and maybe, just maybe, you’ll check out the original versions of these songs as well!

3 songs to listen to: In this Waymaker, Lord I Need You, Run to the Father