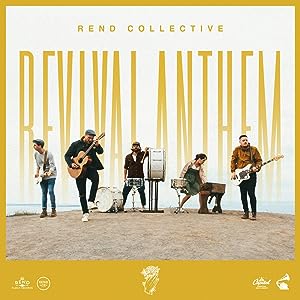 ‘..Rend Collective. Formally called ‘Rend Collective Experiment’. Quite possibly one of the biggest groups out of Britain (alongside the now dis-banded Delirious?) to immerse themselves within the Christian music industry within the last ten years or so. One of my favourite bands/artists to come out of the U.K./Ireland area, alongside Tim Hughes, Matt Redman, Philippa Hanna and the now disbanded Delirious?. Originally signed to worship music label Integrity Music before making the jump to Capitol CMG and thus releasing the chart-topping more radio-friendly 2015 album As Family We Go (which featured the radio singles ‘You Will Never Run’, ‘One and Only’, ‘Every Giant Will Fall’ and ‘Joy of the Lord’), Rend Collective have managed to fuse together two things and do both of them well- present to us great worship music, while also pushing boundaries and creating good acoustic/folk/alternative music worthy enough of having repeat value, with their craft on a higher plane than sadly most of the modern worship music available at our fingertips at the moment. Not to discount the valid passion present in much of today’s CCM/worship communi,ty, it’s just that when a band/artist comes along that presents to us something different (and it’s a different that is great), we all ought to sit up and take notice. And Rend Collective is one such band…’ This is the introduction I wrote for Rend Collective’s 2018 album Good News, as well as a similar intro to their new song ‘Your Name is Power’, review written here. And so I only thought it was fitting and a tribute to the great band which is Rend Collective, that I quote the same introduction here…because what have I said about the band that I haven’t already? That they are great and revolutionising the worship music genre as we speak? Personally I reckon they are carrying the mantle that Delirious? set down…but that’s just my opinion. But what will I know? I’m just an avid fan of the group, and a reviewer of albums. Nevertheless, what I do know is this- that on the heels of ‘Your Name is Power’ comes ‘Revival Anthem’, and if it is anything like ‘Your Name is Power’, then we’re in for a real treat, and quite possibly one of the most musically diverse and lyrically challenging Rend Collective albums I’ve heard in a long time!

The song itself? ‘Revival Anthem’ is a track of hope and expectation, one of longing and wanting revival to happen in the streets of where we’re at, amongst the people we come into contact with, and within and around the situations and circumstances that no one would ever think were to be possible. As the band have divulged to us in a recent instragram post, ‘…“Some Christians live such spiritually irrelevant lives that the enemy makes no plans to oppose them.” Read that yesterday and it shook us. In July we spent a week driving around Ireland and Northern Ireland leading worship and praying over specific areas of the countries. #RevivalAnthem was in our hearts the whole time. This song matters to us, and we believe it isn’t just Ireland and the UK in need of revival. We need revival in our hearts— daily. Come on church, let’s let our lives here make a difference on eternity…’ It is a joy to know that everywhere around the world there is a yearning and longing for a revival to come and flood the nations, maybe even more so than ever before. For revival, by definition, means to awaken something within yourself that was dormant, and understand the gravity and ramifications of what the God of the universe has done for us to be reconciled with Him forever and ever, and that it wasn’t because of who we are as people that He undertook such drastic actions, but it is who He is as God- caring and loving, wanting creation to come to Him in fellowship and knowing that it does require a price that we as mere humans cannot pay- and thus, Jesus paid it for us. Once we understand that, I mean, really, truly understand that- then revival will come and stir up a generation on fire for Jesus that we have never seen before.

A song that can give us hopes for the future in light of what revival is looking like now around the world; Rend Collective have always been a source of worship music over the years, and hopefully, as we all listen, we can admire the band for their tenacity and their longevity in a music, dare I say, business; where artists come and go at the drop of a hat. Well done to the band for such a joyous and declaratory single. Nevertheless, below is an excerpt from the band from another Instagram post about the song itself, and what they would like people to hear when enjoying a song like this. So let us read this below, and be encouraged of the anthems that we sing at the moment, and that He himself and what He is bring to the fore right now is a revival anthem in and of itself. Well done Rend Collective for the song, can’t wait to the full length album, whenever that arises!

We’ve heard of so-called “secular Europe” – we just don’t believe it. God is on the move and we will not be brainwashed by the propaganda of the Enemy that tells us otherwise. Not even on the heartbreaking day we stepped up to the mic at Phoenix Park in Dublin, which was prepared for over a million Catholic Christians to attend the Pope’s visit and we saw a tiny fraction of that number, standing scattered and defeated like the dry bones littering the valley. We believe because we’ve heard an anthem rising up. I heard it in what I believe to be the voice of God, rousing me from my sleep at 3 am in the middle of a winter’s night, with a promise to breathe life upon my homeland, like divine CPR. I’ve heard it in the war cries of 3000 German worshippers, rattling Hell’s gates in Stuttgart. I’ve heard it deep underground in a grimy club in Budapest. I’ve heard it ring out in the capital of my own blood-stained city of Belfast. In Dublin. In Sweden. In the Faroe Islands. Across North America. To the ends of the earth. Because there are no Godless spaces. This is our revival anthem. Can you hear it?