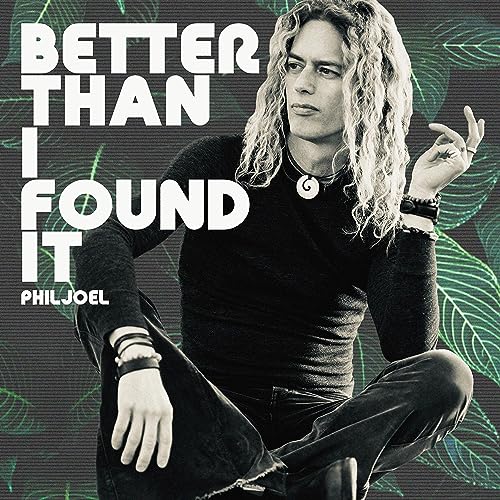 Phil Joel – Better Than I Found It (EP) (Amazon mp3/iTunes)

Phil Joel has been an identifiable member of the Newsboys ever since Phil’s inception into the band in the early 1990s. With his long blond wavy hair and his distinct New Zealand accent, Phil’s demeanor as being a jovial bass player in one of CCM’s pioneering bands, has been a trademark of his throughout his whole career. And while for me he’ll always be remembered as the bass player of Newsboys, Phil’s has also had a substantial career as being a solo artist as well- starting way back in 2000 with his debut album Watching Over You that spawned the radio hit ‘God is Watching Over You’. 6 albums and around 20 years later, Phil is back once again, this time releasing a solo EP titled Better Than I Found It, this coming Friday (22nd January 2021). And together with his collaborative efforts with the Newsboys, alongside his solo material and even his band Zealand Worship (of which he was the lead singer, and released with the band, a 2018 album titled Liberated), Phil’s ability to convey in all these music situations, an atmosphere of joy and hope, is something that has always drawn me to this New Zealander, and his ability to earnestly deliver music with such poignancy and emotion, and Better Than I Found It is no exception.

‘…I’d felt for quite a while that I needed to take some time and musically get back to simply making art, but I didn’t know how I was going to make it happen. Well, 2020 made it happen for me. In March, we got word that touring was off until further notice, so I went home and locked myself away in my studio. It put me in a position to have to make production decisions alone and create a sound that’s truly me…’ Whether this above quote indicates that Phil is leaving the Newsboys to pursue either Zealand Worship, his own solo material, or both, remains to be seen. He could try to do all three in tandem. But whatever the case, Better Than I Found It is a result of such soul-reflection from Phil, as he delivers to us, 6 songs that can hopefully allow us to view this life as an opportunity to act and change someone else’s life for the better. Title track ‘Better Than I Found It’ reminds me of something older artists like The Beatles the the Beach Boys would record back in the day, as Phil imparts this message of leaving the earth better than we found it- not a new one, but a message nonetheless that we need to hear, especially during this time of 2021. We are only here on Earth for a finite amount of time. How do we leave it all, better than we found it? How does that even look like? How should we approach things, knowing that whatever we do in our lives, will have future implications for generations to come? How do we live our lives, knowing that a life isn’t summed up by how much money was amassed, but by how you loved your fellow man, and how you cared for people that were the least of these? Things to ponder, and something to chew on for reflection, as Phil continues to present other hard-hitting themes, from seeking unity moving forward to not be divided by the things that are different, but to see the commonalities between different groups of people, if we want to see true progress in the world we live in today (‘In This Together’), to being present and with someone who is at the brink of death, knowing full well that this person is moving from this life to the next, and being there for this person, loving them in the midst of this finite transition (‘Other Side’). ‘Remember’ is a poetic and poignant melody about being able to ‘remember your name’, to know where you came from and your heritage in life. The remember that we have been bought at a price, and that we God’s workmanship, loved by Him and accepted into His kingdom through the death and resurrection of Christ Jesus, paid the debt for our sin. That is who we are, that is our name over our lives- beloved, loved by the King. And sometimes we can forget that, for whatever reason- and Phil can hopefully remind us through this song, of this life-altering understanding.

‘Sailing Speed’, the first music video of Phil’s from this album, speaks of going back to the simple life, to strip away all the superfolous things and to find yourself being transported back to when you didn’t have to worry about this and that, and you just enjoyed your life all the more because there weren’t that many worries hanging on you. In the music video, we see Phil take his dog out across the waters to a secluded island to retreat and enjoy the simple life. Along the way, Phil encounters ‘Bigfoot’, and in that momen to discovering something of the unknown, he and his dog leave the simple life behind. At the end of the video, it is discovered that the ‘Bigfoot’ is Phil Joel himself, which brings about this notion and understanding that sometimes, the fear of the unknown can in fact be yourself and you being your own worst enemy when it comes to simplifying your life and trying to move from the hustle and bustle to such a simple life, we all know we deserve. As Phil relays himself, ‘…I’m my own worst enemy, especially when it comes to simplifying my life and prioritizing the things that are important. I always found a way to sabotage myself at different points and I think we all do. We’re all our worst enemy at different times, so I think it can mean a few different things to a few different groups of people. I come out of the Christian music world, so believers are going to sort of look at that and get some sort of meaning out of it, and maybe people who aren’t knowing me and what I’ve done in the past and the faith connection, they’re going to draw their own conclusions. I like that. I think that’s important…’ The EP then ends with ‘Alright’, a call to unity across races, creeds and colours, as Phil makes an impassionate plea to bring together people of different backgrounds, under the umbrella of how ‘…love makes us one and the same…’, as we understand that it is in our similarities that we can change the world, rather than our differences. For even if we disagree with someone, we can still work with them to better humanity at its core, and while we could differ on fundamental faith issues, we know that to change perception of how the world sees people, we ought to love people who are different from us, who may not see the same as us, because we know that we were first loved by our Father. Featuring excerpts of speeches verbatim by John F. Kennedy and Martin Luther King Jr, ‘Alright’ challenges us to come together as a unified people, a people whose common goal is to leave this world better than we found it.

‘…the idea of us all taking responsibility to care for our fellow man, our nation and our planet has really been in the forefront of my mind for the last couple of years, so recording these songs now seemed like perfect timing. Right now, we’re all being forced to think about the future and what kind of world we want to live in, not only for ourselves and our kids, but for our neighbors and their kids and grandkids too. It’s a time to ask some big questions about where we are and how we got here. But more importantly, it’s about who we want to be as we move into this delicate new future. I’ve tried to explore those questions and reflect the struggles they pose, while also presenting the hope of a better tomorrow…’ Phil’s EP is one of hope, healing as restoration, as he reminds us that the simple life for each of us is not out of reach. For when we focus on being there for our neighbours, gaining a new perspective in loving someone we may disagree with, we may even understand that sometimes the things that we think divide us, aren’t necessarily as grand as we make them out to be. Not enough for us to create an us-v-them mentality. For it is when we love without condition as Christ loved us, that people can see the transformational power of Christ’s work in us, and as we bring the love of Christ and the hope of Jesus to the world, through loving people without reservation or judgement; Phil’s album Better Than I Found It is a perfect place to start for this notion and understanding to sink in. An EP that continues to assert my statement that Phil Joel– through Zealand Worship, Newsboys and his solo material, is by far one of the most underrated in all of CCM; this is a must, if you have enjoyed Phil’s previous material, or if you love artists like Newsboys, Nathan Tasker or the Paul Colman Trio. Well done Phil for these 6 songs- my favourite EP of 2021 thus far!

3 songs to listen to: In this Together, Remember, Alright